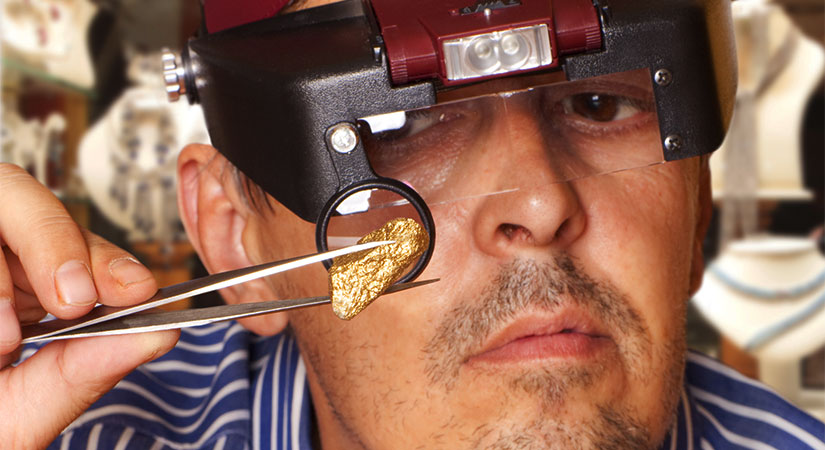 This week, Your News to Know rounds up the latest top stories involving gold and the overall economy. Stories include: Is $5,700 gold inevitable? Some mixed data from the world’s top mints on gold and silver demand; and how the global de-dollarization movement insulates nations from sanctions.

Compared to stocks, gold is 60% undervalued (for now)

MoneyWeek’s Dominic Frisby is an analyst to watch. His precious metals analyses are full of insights, and his latest observation on gold’s price is fascinating. Frisby shows off his decades of experience by reminiscing about gold’s price trajectory from the late 1990s to now.

There was the low in 1999 at $250/oz, marked for all eternity by Chancellor of the Exchequer, Gordon Brown, as he sold off two-thirds of British gold at the bottom of the market when there were no compelling reasons to do so.

Ouch. To give Gordon Brown the benefit of the doubt, surely he assumed gold was no longer a prudent investment. (But what did he replace it with? I’ve no idea.) But remember, 1999 was near the peak of the dot-com bubble. Safe haven investments were out of fashion. Unprofitable, high-growth tech companies were all the rage – and yes, that does sound familiar.

The dot-com bubble popped, markets tanked, and another bubble inflated in its wake – the one history remembers as the Great Financial Crisis. Gordon Brown probably felt severe heartburn the day gold reached its all-time high of $1,920 in 2011, a 668% increase over the 1999 price.

Frisby points out that the 2011 peak in gold’s price was the culmination of several years of a historic bull run. And, as we’d expect after a long bull run, the retracement that followed was considerable. And quite possibly heartbreaking to some gold owners. (Consider, though, even gold’s low points of 2013 and 2014 were significantly above the Bank of England’s selling price.)

Fast forward to today – gold’s price is $1,920 again. Does that mean we’re at the peak of another bull market? Frisby thinks not.

Now, just to be clear, that should be is arguable. Currently, the S&P 500 is valued some 30% higher than back then. So it’s more likely the case that gold is considerably underpriced compared to stocks, even after their decline from “astronomically overvalued” to “merely twice as expensive as the historic median.” Frisby doesn’t necessarily think gold will surge to $5,700/oz – it could, but what’s more likely in my mind is that stocks will continue their fall toward realistic prices.

So, either gold rises to meet the S&P 500’s price level, or the S&P 500 falls to reasonable prices. Either outcome, Frisby predicts, will leave gold owners in an enviable position.

UK’s Royal Mint announced that its sales of gold bullion increased by 25% year-over-year, and silver sales increasing 29% over the same period. Unsurprisingly, Royal Mint said that March had the highest volume of monthly sales as the Russian invasion of Ukraine spurred safe-haven demand and brought gold to a new all-time high. Interestingly, they saw a 5% increase in new buyers – so it wasn’t just goldbugs and silver stackers driving demand, but new investors interested in securing their savings, as well.

Andrew Dickey, the Royal Mint’s Director of Precious Metals Investment, is bullish on gold’s prospects this year. He said that recessionary concerns, general uncertainty and crypto market turbulence should all contribute to heightened gold demand:

Looking forward to 2023, many financial experts are expecting this momentum to continue, which will promote a level of confidence in investors of precious metals following IMF warnings of a recession. Evidence shows that previous recessions have had an impact on the gold price increasing, with the metal historically deemed a ‘safe haven.’

The U.S. Mint’s sales figures appear to be trailing those of Britain’s Royal Mint. But is it really a lack of demand, or is something else playing a role? Out of the four precious metals’ sales figures that the U.S. Mint revealed, we can’t help but focus on those of silver. For example, 3,499,000 1 oz American eagle silver coins were sold so far this month, compared to 5,001,000 coins sold last January.

Are the silver American eagle sales figures going to catch up to those of last January? The better question is: if they don’t, do we really believe it’s due to a lack of demand? We’ve spoken about the U.S. Mint having difficulty sourcing silver for a while now. If the total sales figure for this month clocks in below last year’s sales of silver American eagles while other world mints are posting record numbers, I believe it’s safe to conclude that demand is not the issue.

Rather, once again, that U.S. Mint seems unable to keep up with demand. Hopefully, we won’t see a return to the sky-high premiums that shocked silver buyers during the worst of the pandemic panic. Hopefully.

Even so, it’s probably a good idea to buy silver sooner rather than later – just in case…

It’s not that often that the official sector steals the spotlight in the gold market, but we might be in such a time right now. And for good reason! Globally, central banks are buying gold faster than at any time in the last 50 years. 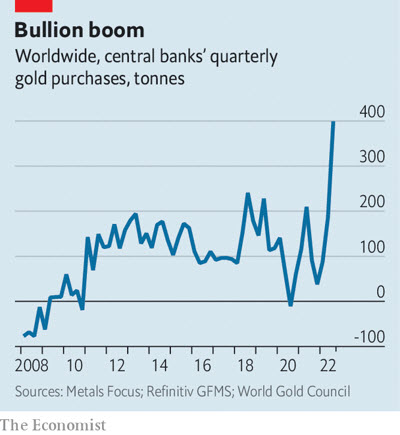 (Side note: Here’s why central bank gold reserves are important.)

It’s not exactly a concidence that the last time we’ve seen this much gold bought by central banks, the year was 1967 and gold was still the global reserve currency. And neither is this point something we can overlook. In 1967, a central bank buying gold might have only meant buying the world’s tether. Now, it represents something different.

Kitco’s in-depth analysis delves into why countries are buying up gold during a time of rising interest rates and surging inflation. It’s a long-winded story that can just as easily be explained with a single sentence. Or, for that matter, a single word: independence.

Why? This is all in light of the most recent episode of weaponizing the U.S. dollar. There is no question that Russia overreached with its invasion of Ukraine. But by financial intervention via freezing assets and imposing sanctions (rather than a military intervention), did the U.S. make an overreach of its own? I’m afraid the answer is yes.

Recent months have seen many central banks stockpiling gold – perhaps because of rising inflation, but it could also be part of a wider strategy to help them become sanction-proof.

BRICS is obviously representing a kind of trade competitor, among many other things, to Western nation groups. It includes countries that have felt the sting of being cut off from the Western financial system, a sensation they aren’t keen to continue experiencing. And wherever they go with their planned development of a new alliance, gold will follow.

“We are and will continue to see more nations use gold as a trading mechanism, or in some cases to back other trading mechanisms – whether they be local/regional currencies or digital assets,” said William Stack, financial advisor at Stack Financial Services LLC.