Home » Blog » After the Gold Standard, Government Grew While the Dollar Shrank

After the Gold Standard, Government Grew While the Dollar Shrank 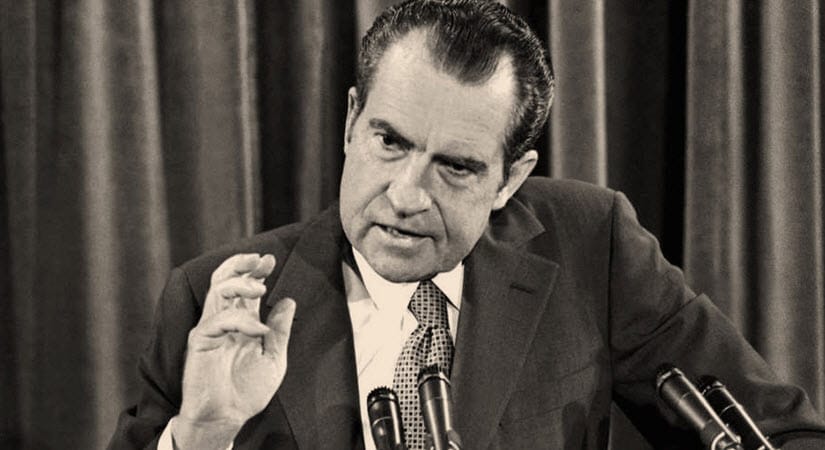 This week, Your News to Know rounds up the latest top stories involving gold and the overall economy. Stories include: The post-gold-standard government expansion and dollar contraction, the argument for holding onto gold, and Palantir buys over $50 million in gold bars as safety.

As The Hill’s Robert P. Murphy notes, most Americans associate the end of the gold standard and the ensuing dollar erosion with Nixon and his 1971 decision to “close the gold window.” In truth, however, the U.S. dollar was weakening long before that, something that can be explained by evaluating the length of the tether between gold and the dollar.

Between our nation’s founding and the Civil War, there was practically no difference between gold and currency. U.S. coins were minted with face values based on the quantity and price of gold or silver they contained. This kind of policy minimized the government’s role in monetary issues. Instead of being stored in vaults, the nation’s precious metals circulated. This decision essentially allowed the public to dictate monetary policy based on natural supply of the metals: individuals presented gold or silver to the U.S. Mint to be manufactured into into coins.

The Civil War saw the first shift away from this approach, when paper notes not immediately redeemable in gold and silver coins were issued by both the Union and the Confederate states (primarily to pay for war efforts). Both sides engaged in inflation, an obvious temptation when no other controls exist on money issue.

Between 1879 and 1914, the government did away with silver monetization, but restored convertibility between the dollar and gold with a roughly $20.67 an ounce ratio. By this time, however, the view of paper as money had already established itself. So long as a $5 bill and a $5 gold coin are fungible (interchangeable, with no loss of value between them), carrying $100 in paper money is just more convenient than carrying $100 in coins.

Then the Great Depression struck. The infamous 1933 decree by Roosevelt forced the people to exchange their bullion with the aforementioned notes. By 1934, the dollar’s value of gold was listed as $35 an ounce, a 41% devaluation. The 1944 agreement also made it so that central banks can redeem dollars for gold with the aforementioned price, but not the people themselves. It was this attempt to retain a stable global economy that Nixon did away with in 1971 by completely ending any correlation between the dollar and gold. 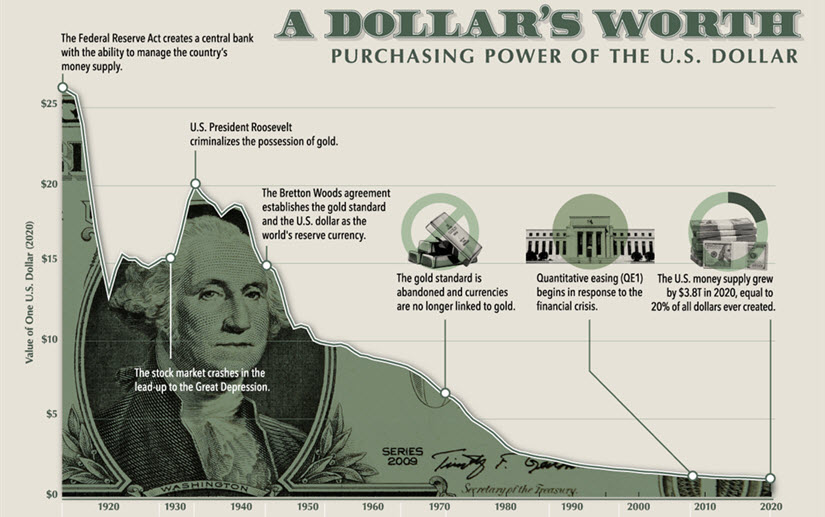 The Bureau of Labor Statistics show just how much government expansion and meddling in monetary affairs damages the economy. The “Roaring Twenties” earned their title partly because the dollar’s purchasing power eroded by less than 1% over a decade. Between 1952 and 1959, when the gold standard was moved away from further, the dollar lost 9% of its purchasing power. By comparison, the dollar lost an unprecedented 40% in value during the 1971-1979 stretch.

Since 1980, things have only gotten worse. If we look all the way back to 1919, the U.S. dollar has lost 94% of its spending power. A few minutes with the BLS Inflation Calculator are sobering, to say the least.

What would today’s America look like had the nation remained on the gold standard? Alas, we’ll never know. We can only observe that government intervention into money has resulted in an almost total obliteration of the dollar’s purchasing power to date. Certainly this state of affairs cannot last.

As seen on MoneyWeek, one might be tempted to entertain bearish sentiment when comparing gold’s performance to any other asset over the last year. Everything else seems to have gone up, while gold lost 15%. Yet the Wall Street saying that one should put 10% of their portfolio in gold and hope the metal doesn’t go up has stuck around with good reason.

Gold, long renowned as a safe haven asset, invariably outperforms amid economic turmoil. Such has been avoided over the past year through money printing, which is now beginning to show with inflation rising across the board. Knowing that inflation is one of the strongest drivers of gold prices, it’s not hard to envision a scenario where gold recovers its losses and gains between 30%-40% from its current levels in the near future.

That’s especially true considering how many pressures gold has had to contend with, while mostly managing to hold onto the $1,800 level. During a time of conspicuously low liquidity in the markets due to regional holidays, someone dumped 100 tons, or $4 billion of gold in a single trade on the 15th, a Sunday night. As miners sell around $10 billion throughout an entire day under normal circumstances, some have pegged this as an instance of market manipulation.

Ross Norman, CEO Metals Daily, says that gold’s resistance in circumstances like these suggests that the metal is building a base, or bottom. A base around the $1,800 level is hardly a negative development considering the metal’s previous all-time high of $1,910.

From there, the metal is geared to the upside as it continues to exhaust the ample pressures that have kept it down over the past year. For gold holders that should be viewing gold as insurance, a gradual gain could easily be preferable over a sudden surge. The latter would most likely come as a result of one of the many risks materializing in monumental fashion.

And speaking of risks…

Different companies have different ways of dealing with growth. When data analytics software company Palantir recently sold 5.6 million of its shares, amounting to $139 million, it chose to secure a significant portion of that income in physical gold bars.

The company said this was in preparation for black swan events, referencing last year’s crisis that caught many off-guard. Perhaps due to the nature of the crisis and the bullion shortages that were seen around the world, the company was quite specific regarding its gold investment.

It purchased all of the gold in August in the form of 100 oz. gold bars and opted to store them in a secure facility that will allow easy access should the need arise. Numerous analysts have said that gold’s $1,750-$1,800 level makes for an attractive entry point, and Palantir has definitely made the most of this bargain considering the size of its purchase.

Interestingly enough, it seems as if Palantir is looking to expand its gold allocation further, as the company announced that customers will now be able to pay with gold as an alternative to paper money. (So far, though, none of their customers has chosen to do so.)