Can the Federal Reserve Stop the Looming American Famine? 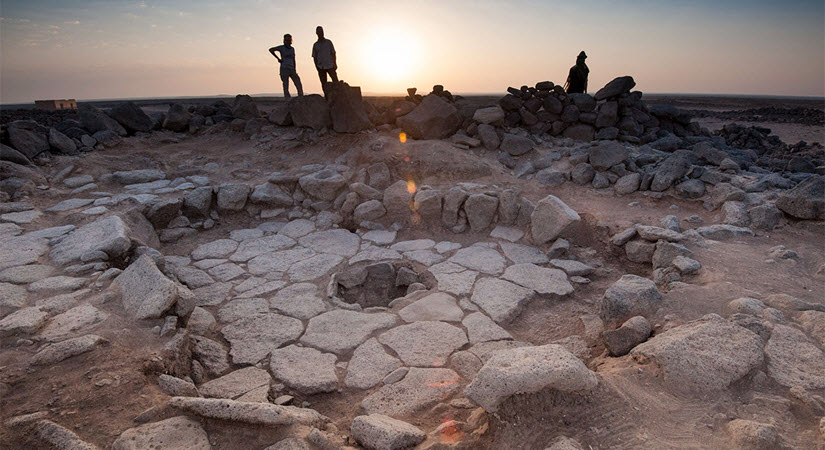 Image CC BY-NC-SA 4.0 via A. Pantos of Shubayqa Project

This story begins in February 2020. COVID-19 swept through the U.S., and a media-generated panic set in, which sent shockwaves through the markets. Store shelves emptied, and millions of Americans locked themselves in their homes. Economic activity ground to a halt.

In response, the Federal Reserve went on a money printing binge, reflected in the official chart below:

Of course, you can’t just keep printing money like the Fed did without repercussions. We started seeing the consequences of this unprecedented tsunami of dollars early in 2021. An increased supply of dollars competing for a diminished supply of things for sale, predictably, led to a rise in costs. In other words, price inflation.

Since January 2021, inflation accelerated from 1.4% to the current shocking rate of 8.5% (and very likely still rising). That’s a sixfold increase!

That’s pretty shocking, but it could be worse. If we measure price increases the same way the Federal Reserve did back in 1980, it would be closer to 17%. 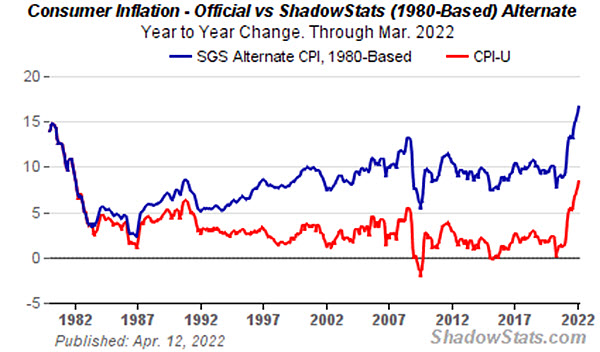 Back in the 1980s, prices were measured based on a fixed basket of goods. When that became politically unpalatable, the Federal Reserve and the Bureau of Labor Statistics (BLS, the government department that tracks prices) cooked up a set of nicer-looking numbers.

How did the measurements change? We’ll let an expert on the subject, analyst John Williams, explain:

So instead of a specific and fixed set of staple goods, like eggs and bacon and flour and coffee, the “new and improved” measure of inflation accounts for substitution. The assumption is, if the price of eggs goes too high, well, Americans will just stop eating eggs and spend their egg money on something else.

Williams cites a particularly unpleasant example of this subsititution:

Expanding the example that former Federal Reserve Chairman Alan Greenspan often used, where, as the price of steak rose, consumers would shift to hamburger, so too with higher hamburger costs have some cash-strapped retirees actually shifted consumption to dog food.

Quibbles about how we measure and report inflation numbers aside, we’re still seeing serious economic consequences from the Fed’s decisions. When we take a step back and look outside the U.S. we find even more cause for alarm.

We know the Fed, and the world’s other central banks, can print an infinite amount of money. Today we ask, can they print food, too? Because that’s what we’re going to need, sooner than most people think…

Michael Snyder wrote the following about the current food shortage situation that has been starting to make the rounds in the news cycle:

The head of the UN World Food Program is warning that this is going to be the worst worldwide food crisis since World War II, and even Joe Biden is admitting that the approaching food shortages “are going to be real”. Unfortunately, there have been some new developments which threaten to significantly escalate things. [emphasis added]

The first notable development is the Russia-Ukraine conflict. Wars destabilize economies, and World War II caused a food shortage in the U.S. even though there were zero battles fought in the continental United States.

What makes the Russia-Ukraine conflict more significant? Simply that Russia was the world’s #1 exporter of wheat. Ukraine was the fifth-largest.

In fact, the two nations exported so much of so many different kinds of food (before the invasion) that, since then, the global food price index has reached an all-time high. Food has never been more expensive since the index began measuring prices in 1990.

McKinsey analyst Daniel Aminetzah thinks the overseas conflict will destabilize the dinner table over there, but also predicts the effects will spread around the globe:

The instability from the Ukraine–Russia conflict starts to create a whiplash effect in the food supply chain. It’s hard to fully project the implications, but this crisis will have clear secondary effects on other breadbaskets.

The second notable consequence has been a surge in fertilizer prices. Russia is the world’s largest exporter of fertilizers overall, and when we include Russia’s ally Belarus (also sanctioned), 40% of the world’s fertilizer supply is inaccessible.

Western sanctions on Russia, a major exporter of potash, ammonia, urea and other soil nutrients, have disrupted shipments of those key inputs around the globe. Fertilizer is key to keeping corn, soy, rice and wheat yields high. Growers are scrambling to adjust.

Without fertilizer, crop yields decline. Fortunately, the U.S. doesn’t import most of its fertilizer ingredients from Russia. Other nations, especially Brazil, will suffer much more from this shortfall.

We must also consider the rise in fuel prices – which have dropped since the initial invasion, but are still over 10% higher than at the beginning of the year.

David Malpass told the BBC that record rises in food prices would push hundreds of millions of people into poverty and lower nutrition, if the crisis continues. The World Bank calculates there could be a “huge” 37% jump in food prices. This would hit the poor hardest, who will “eat less and have less money for anything else such as schooling.” [emphasis added]

What’s worse is, there’s no easy way out. There’s simply no way the Fed and other central banks can print their way out of this. Raise rates, lower rates, offer helicopter money loans to cash-strapped farmers… There’s simply nothing they can do to lower prices.

Except maybe take off their ties, roll up their sleeves, and start shucking corn.

Is the U.S. facing famine?

The good news is, probably not! Fortunately, the U.S. only imports about 15% of the food we eat. If this all plays out like the experts think, here’s how the near future will probably look…

In first-world countries that produce a lot of food, like the U.S., people aren’t likely to starve in droves. Some families, already on the brink of catastrophe, are likely to be pushed over the edge. And just about everyone will find themselves making compromises, economizing where we can, to keep food on the table. (Even if it’s not the food we’d prefer to eat.)

That, at least, is good news.

In emerging or impoverished nations, especially those who rely on steady shipments of imports, millions could face starvation. This will lead to massive geopolitical unrest, an increase in famine refugees desperate for food, further destabilizing an already-wobbly global economy.

Let’s turn to the question, what can you do to ensure your family is secure? First, you must start thinking about long-term financial security. Reflect on the stability of your buying power – not the number of dollars you have, but what those dollars will get you. What if we wake up tomorrow and bread is suddenly $15 a loaf?

To paraphrase what we say in our free info kit (request yours here):

But don’t diversify with physical gold and silver in the hopes of making a quick buck. Instead, you’ll be able to enjoy security and peace of mind. You can trust that, no matter what happens to the global economy, you’ll still have enough to buy those 350 loaves of bread. Times like these remind us of gold’s 2,500-year history as a safe haven investment.