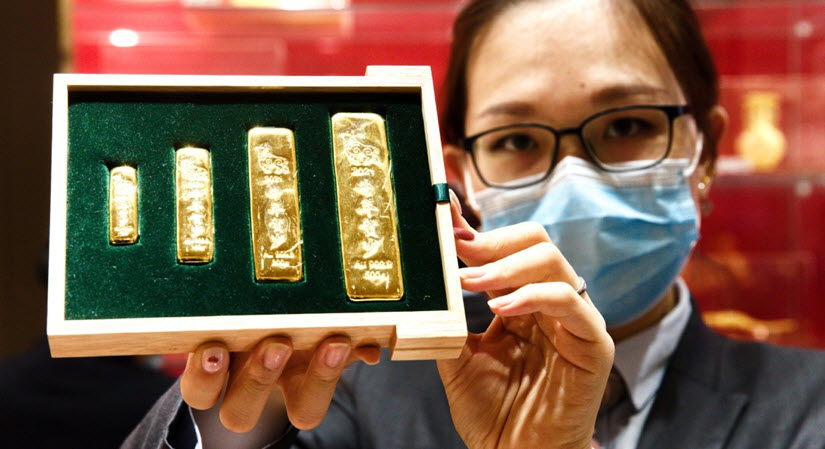 This week, Your News to Know rounds up the latest top stories involving gold and the overall economy. Stories include: China opens its borders to billions of dollars of gold, silver is the real gold in Biden’s agenda, and a small mountain town in France was hiding a sizeable gold stash.

According to a Reuters exclusive, China is looking to get back on track in terms of gold imports, and in stupendous fashion. Currently, Chinese customs data shows imports of around 10 tons of gold, or $600 million, monthly over the past year. This is a significant decrease compared to 2019, when China imported roughly 75 tons, or $3.5 billion, each month.

These figures will be exceeded by a wide margin in April and May, as sources familiar with the matter state that China’s central bank has greenlighted the import of 150 tons of commercially-available gold between April and May. This drastic increase in imports, amounting to around $8.5 billion at current prices, highlights an economic recovery for the world’s top gold consumer, as well as voracious consumer demand.

February’s jewelry sales for the Lunar New Year in China have exceeded those of the previous two years, adding to the picture of Chinese gold demand  ramping up rapidly. Asian gold traders said that local premiums on the metal were moving between $7 and $9 an ounce and that they would have likely gone even higher without an appropriate increase in imports to satisfy demand.

Asia’s gold consumption have traditionally acted as one of the main pillars of support for gold prices, and Standard Chartered analyst Suki Cooper believes that the recovery in demand from both nations could play an important role in sending gold prices higher.

India has likewise experienced a huge spike in gold demand, with its March imports of the metal clocking in at a record 160 tons.

How Biden’s green plan could turn silver into gold

As gold breaks past $1,770 for the first time since February and silver hits a three-week high, it might pay to reassess once again how the latter’s industrial component could pave the way for much higher gains in another metals bull run scenario. Barani Krishnan notes that, in the industrial world, silver is viewed as the real gold as it boasts the best thermal and electrical conductivity out of any metal.

While silver’s manufacturing component was always prominent and helped bolster prices alongside its ubiquitous investment demand, President Biden’s Green New Deal could add some exciting new prospects to this dynamic. Since November, Biden has stated a commitment to zero-net-emissions by 2050, a green agenda that will be fueled by $1.7 trillion in federal funds and $5 trillion leveraged from the private sector.

These massive figures will invariably end up in the silver market, as the ongoing bid for green energy focuses not just on reduced vehicle emissions but also on solar panels.

StoneX Group’s Rhona O’Connell has an interesting observation regarding industrial demand for silver:

A key here is electrification. Silver has the highest electrical (and thermal) conductivity of all metals and solar cells plus electric cars are driving demand, while supply remains largely price-inelastic.

“Inelastic” in this context means that demand isn’t sensitive to price. If a solar panel manufacturer needs 20g of silver for a panel, they need the silver whether it costs $10 or $50 per ounce. The manufacturer simply raises prices on the finished product.

In addition, Kirshnan summarizes the Silver Institute’s recent analysis of silver’s role in green infrastructure. As the Institute noted, the green bid is a global phenomenon and should be observed from a long-term perspective. The growing demand for solar panels will coincide with an ongoing reduction in thrifting options on manufacturers’ side and the rise of the electric automotive industry, which makes ample use of silver. Over the short-term, another point of interest besides Biden’s green agenda has been the contraction of the gold/silver ratio, which has normalized over the past year and now sits at just above 70/1.

The town budget of Morez, a small industrial town in the east of France, was boosted by an unexpected find of a massive gold stash in an old family building. As town mayor Laurent Petit explained, the building had been purchased by the town hall for €130,000 ($155,000) by the previous owners, a family who had lived there for generations. 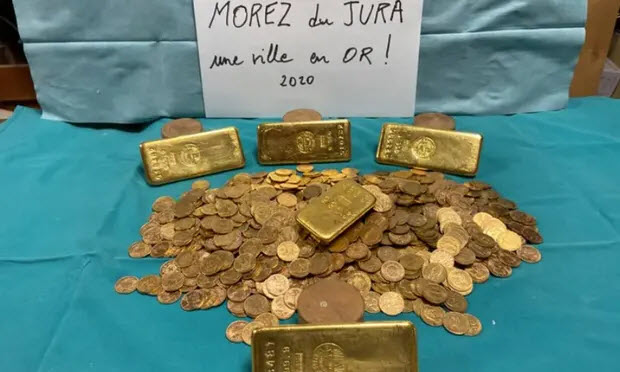 Part of the hoard of gold bars and coins town officials discovered in a house in Morez, France. Photograph: Morez council

When the last occupying member of the building passed away in his 90s, a family relative offered to sell the house, and it was bought by the city as part of a renovation project. Officials entered the house with the intent of cleaning it up and preparing it for renovation, but soon came upon a remarkable discovery.

While they knew the house could hold something of interest due to Morez’s notable history as a manufacturer of clocks and spectacles, they were astonished to find:

Three jars full of gold bars were sitting behind lots of other objects on a shelf. There was surprise and stupefaction. None of us had ever held a piece of gold. I’d only ever seen gold bars in photos, and thought they must be huge. But these were small, weighing 1kg and the size of a cigarette packet.

All in all, the handful of town officials discovered five gold bars and over 1,000 gold coins stashed behind different objects on the shelf. This discovery was estimated to be worth around €500,000 ($600,000).

Further explorations uncovered a safe behind a cupboard, concealed behind stacks of cardboard boxes. When broken open, the safe revealed hundreds more gold coins worth another €150,000 ($180,000).

According to the mayor, the elderly relative who sold the building wasn’t overtly disappointed upon hearing the news and commented that he had heard about a stash of gold in the building but presumed it had been given away. The nearly €1 million find of a gold stash for a town with an annual budget of €6 million is far from insignificant, and the mayor said that the funds will be used for a special project yet to be decided.