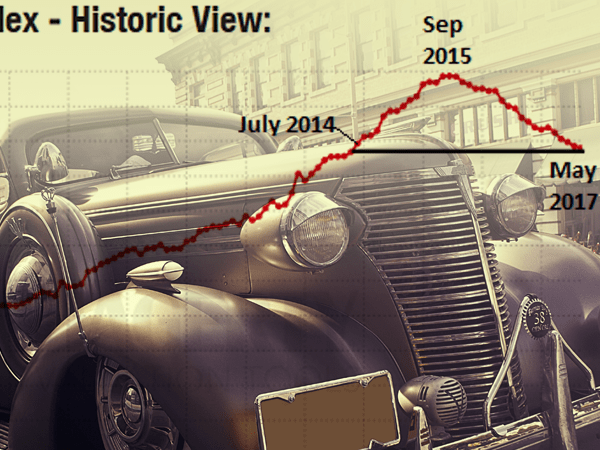 According to correlations between data from a little-known asset index and previous activity in the broader market, stocks could be primed for a long and significant correction. Or, if historical trends repeat themselves exactly, a sharp crash may be waiting to rear its ugly head.

Here’s what the news means for average savers…

Analysts use a variety of tools to predict future market movement — chief among them being data from asset indexes. These indexes look at overall performance for individual asset classes (like real estate, bonds, and so forth), and attempt to tie that information to certain economic events in other parts of the market.

For example, experts might compare performance of the S&P 500 against previous trends in oil prices. When they look at the historical data, if a certain type of activity in oil prices continually coincides with a particular reaction in the S&P, they can make assumptions about what may happen when oil prices repeat that same activity in the future.

Recent analysis suggests that the Hagerty Market Index isn’t just an important tool for car collectors, but also a reliable indicator for future movement in several other parts of the economy.

Wolf Richter at the Wolf Street blog explains that a drop in collectible car prices — as represented through the Hagerty Market Index — has repeatedly been an early warning sign of drops in other major asset classes.

Take our last major crisis in 2008 as an example…

The Hagerty Market Index peaked and then fell sharply in April 2008. Months later, we experienced the worst financial meltdown since the Great Depression.

Does that mean we’re in store for another crash? Well, it could. But it may also mean we’re approaching a slow but steady sell-off in the broader market, which is just as serious.

In the chart below from Hagerty’s May report (I added the dates), note how the index surged 83% on an inflation-adjusted basis from August 2009 to its peak in September 2015. This represents a nominal price surge (not adjusted for inflation) of 95%:

Richter goes on to say this could be a prime example of how asset bubbles will slowly “unwind” in the coming months as a result of heavy quantitative easing policy (QE) from central banks around the world over the past several years.

These QE bubbles might not abruptly “pop,” but could slowly decline — or “deflate” rather — and leave markets slumped and stagnant.

Furthermore, the Hagerty Market Index’s predictive relationship to the broader market implies collectible car prices could be the first QE-fueled asset bubble to putter out, with other asset bubbles in real estate, stocks, bonds, and so forth to follow soon.

Richter sums up, saying, “Collector car prices indicate what’s in store: Despite all liquidity and QE, prices can rise only so far, and then investors back away, gradually, one after the other.”

Gold Rises As Other Assets “Deflate”

So where does all this leave average Americans? What should they be doing if the market is primed to start pulling back from this QE-bubble “deflation” phenomenon?

The answer is rather simple: Buy an asset with intrinsic value that will retain its value (or even increase in value) as other asset classes decline.

Throughout history, physical gold, silver, and other metals have proven to be more immune than most paper assets to the drop that may soon play out in the broader market. And on top of that, as these bubbles in other assets “deflate”, history (as recent as 2008-09) shows us that the price of precious metals often increases.