Each week, we bring you news and top stories about gold, precious metals, and the economy. This week, a mining exec says he expects gold to hit $5,000. Also, Moscow has been hoarding gold this year as fast as it can get its hands on it, and now Russia on its way to become 2nd largest gold producer. Oklahoma, Utah, Texas, and Louisiana might be joined by other states in accepting gold and silver as hard money.

Robert McEwen, Chairman and Chief Owner of McEwen Mining said for an interview last week with CNBC’s Fast Money that he expects gold to reach $5,000 in three to four years. 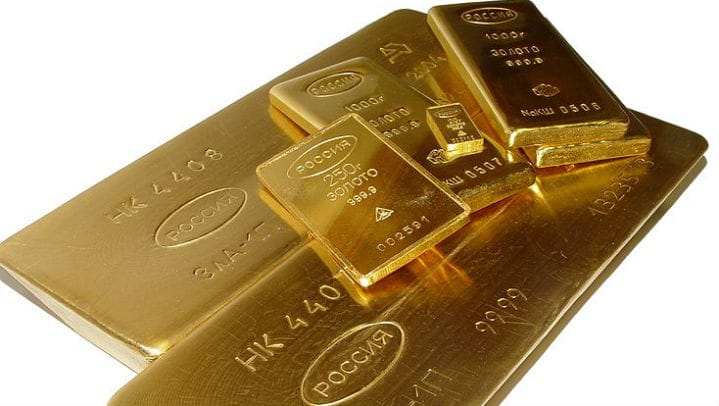 “I’m a long term believer in gold,” said McEwen, “and I see it ultimately getting to $5,000 an ounce. Anything short of that, I wouldn’t be hedging.”

McEwen also pointed out that while the broad market “thinks gold is dead,” the yellow metal is “outperforming the Dow and S&P, and large segments of the market.”

Moscow has been hoarding gold this year as fast as it can get its hands on it. Now it appears that Russia could become the world’s second largest gold producer, surpassing Australia and following top producer China.

Mining Weekly reported that Russian gold output rose 26.6 % in the first half of this year. If the increase continues at the same rate in the second half, gold output could total 10.1 million ounces – or 314.6 metric tons, according to Mineweb. Australia’s output last year was 265 metric tons and China’s 438. In 2013, the Russian Federation also surpassed the United States as the world’s third gold producer.

Russia continues to accumulate gold in an effort to protect itself from Western sanctions and growing economic and political uncertainty. In a way, they are preparing for a new Cold War. July was the fourth consecutive mouth of Russia expanding its gold reserves, adding 9.4 tons of gold valued at $400 million, says Bloomberg. The Russians now have their largest gold reserves in two decades.

Is the gold standard coming?

Mary Fallin, the governor of Oklahoma, has recently signed a legislation recognizing gold and silver as legal tender.

Oklahoma isn’t forcing anyone to accept gold as legal tender – it merely removes sales taxes. The new law exempts all state taxes that previously had to be paid when exchanging gold or silver for paper money. Oklahoma joins Utah, Texas, and Louisiana in its acceptance of gold and silver as legal tender, which could mark the rise of a new gold standard and the fall of paper money in America.

Other states are also considering laws that would recognize gold and silver as money.

Keith Weiner, a Forbes contributor wrote an opinion article saying that the gold standard movement “leads to a rediscovery of the founding principle of America.”

Russia may become World No. 2 gold miner this year

Russia Boosts Gold Reserves by $400M to Highest Since 1993

Image by History of Geo