Backfiring Oil Sanctions May Give Gold Investors a Big Gift 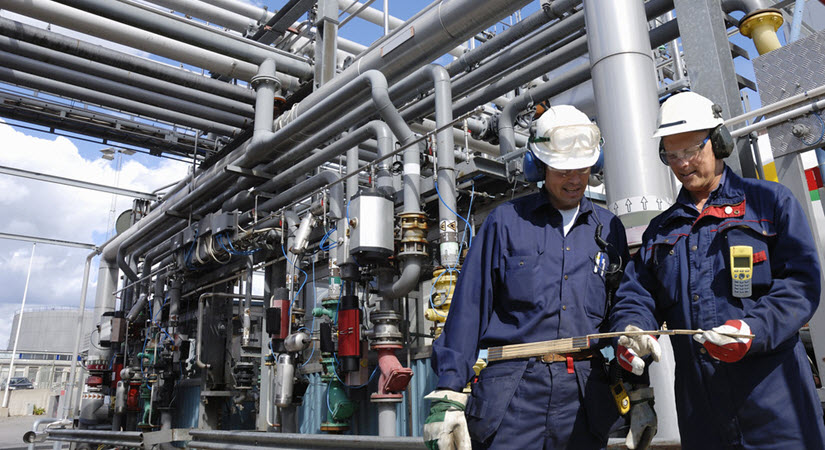 We already know that the U.S. economy is likely to be heading into a recession at some point in the near future (if one hasn’t started already). But on the geopolitical stage, certain events could happen to make things even more challenging in the U.S. economy.

Unless you’ve been binge-watching Netflix since March 2020, you’re aware of the Russia-Ukraine conflict and U.S. financial involvement.

Since the conflict began, the Biden administration has coordinated massive financial sanctions against Russia in an attempt to suffocate the nation’s economy. Furthermore, Biden has controversially pledged advanced weaponry worth billions of dollars to Ukraine. Regardless of which side you’re rooting for, there’s no getting around the fact that American-supplied 155mm howitzers, HMARS, Switchblade kamikaze drones, M113 armored vehicles, Javelin anti-tank rockets and Stinger anti-aircraft missiles are killing Russian soldiers.

And that still isn’t enough.

In a fundamental misunderstanding of the way free markets work, President Biden floated the idea of further punishing Russia by establishing price caps on the nation’s fossil fuels exports.

So far, these sanctions have incurred massive costs, and have had little success.

Russia’s retaliation will likely be much more effective on a global level.

Russia has something everyone else wants

Russia recently seized full control of the Sakhalin-2 Gas Project, threatening heavily-dependent Japan’s energy security. The project accounts for some 4% of the world’s liquefied natural gas (LNG) production, which might not sound like much, but is enough to unsettle the already-tight global market.

At virtually the same time, Russia took the Nord Stream I pipeline down for “maintenance.” Germany, heavily dependent on Russian energy imports, gets half its annual gas via Nord Stream I. German leaders are already warning that their citizens’ fuel bills could triple and the resulting social unrest could topple the government.

Even before these two recent developments, sanctions against Russia had already sent U.S. energy prices higher – even though Russia only accounts for 8% of our imported petroleum. The latest Bureau of Labor Statistics inflation report reveals just how much domestic energy prices have soared over the last twelve months:

So how much worse could this get? The Carnegie Foundation’s Sergei Vakulenko ran the numbers and has some unpleasant conclusions:

So, if we assume that the total of the current 7.5 million [barrels per day] of Russian petroleum exports will be slashed in half, with the other half managing to make its way past the sanctions barriers, the world petroleum balance… would exceed the previous oil crises of 1973, 1979, and 1991, and unlike the previous disruptions, it promises to last not just a few weeks or months, but years. [emphasis added]

But the most shocking impacts are far worse, as Bloomberg reported. JPMorgan Chase analysts predict global oil prices to reach a “stratospheric” $380/barrel if Russia cuts its crude oil exports.

Western governments have utterly failed to cut-off Russia’s cash flow from energy sales. On the contrary, because of higher prices, Russia is actually making more money than before the war. While Russia is selling less for more, it is Europeans and Americans who are paying more for less. Biden suggests this is a cost of resisting Putin’s aggression. While this might be a cost worth paying if Biden’s strategy would be effective, it has been just the opposite.

So far these efforts to crush Russia’s economy have done nothing but drive the ruble higher to levels not seen since 2014. While our Federal Reserve is struggling with 9.1% inflation, Russia’s Central Bank is actually worried about deflation because the ruble is so strong!

The ongoing economic war against the U.S. and Russia is already costing us at the pump – and if oil were to hit $380 a barrel, then the economy would likely crater. Gold prices could benefit, though, for a few reasons…

During times when inflation is running hot like now, oil and gold prices tend to be related. Analyst Meera Shawn explained why:

Another important link between gold and oil is inflation. As crude oil prices rise, inflation also rises. Gold is known to be a good hedge against inflation. The value of gold only increases when inflation rises. Over 60% of the time, gold and crude oil have a direct relationship.

You can see how the price trends compare for the last five years between gold (blue line) and oil (orange line) on the graph: 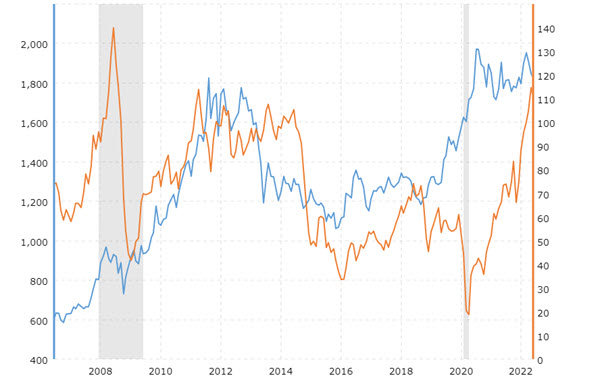 As you can see, both commodities generally follow each other up and down in price. However, there’s more to the correlation story than just, “commodities move together.” Oil can rise in price based on demand, or on supply constraints that don’t affect gold. Also, as you can see from the chart, oil and gold prices diverge during recessions. That’s when demand for oil drops and gold rises on a flood of safe haven investment.

So a sudden jump to $380 a barrel might drag gold’s price higher, faster, as higher energy costs drive broad inflation throughout the economy. On the other hand, should oil prices quadruple overnight, that would have an absolutely catastrophic economic impact.

Quite possibly the worst we’ve ever seen.

With all this in mind, between Russian determination to conquer Ukraine and Biden’s bone-headed backfiring sanctions, it seems like we can rely on higher energy prices for a while. The pain at the pump will continue. So how can those of us saving for retirement benefit? Most of us don’t have a Texas oil well in the back yard pumping crude…

The scenario above is hypothetical, for now. What lessons can we learn?

Commodities happen to place among the top inflation-resistant investments. There are some drawbacks, though.

An ideal commodity would be easy to buy and store, economically insensitive and lower in volatility. If this sounds like a dream come true, then you’re in luck. Physical precious metals, specifically gold and silver, both fit the bill. If you’re interested in diversifying your savings with an inflation-resistant, crisis-resilient alternative whose price doesn’t depend on the backfiring sanctions against Russia, I strongly urge you to take a few minutes to discover whether physical gold and silver are a smart choice for you and your family.