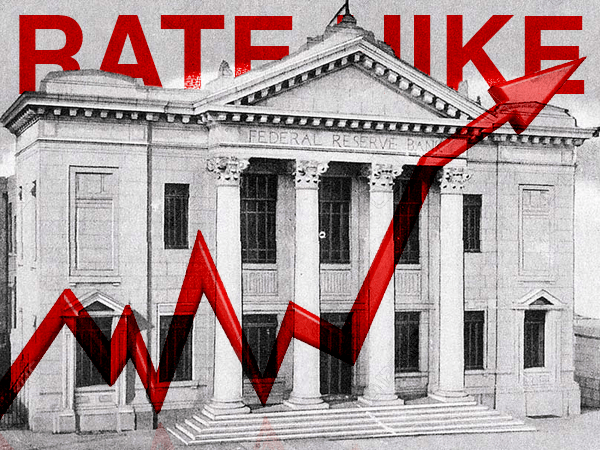 In March we warned of continued Fed rate hikes. In May, we reported on more rate hikes and their potential impact on stocks. In August, the QT “time bomb” started ticking…

On Wednesday, the Fed raised rates for the eighth time since tightening started. But the KBE Bank ETF — which holds Bank of America and Citigroup among others — failed to rally.

This could be a sign of an alarming trend beginning to unfold.

On CNBC’s “Trading Nation,” equity strategist Matt Maley warned that even though the markets are rallying, the KBE Bank ETF hasn’t:

“The thing that concerns me is that not only has it been stuck in a sideways range as the market has rallied all year but now in the last couple of weeks it’s dropped below its 200-day moving average. This has been key support for the group,” Maley told CNBC’s “Trading Nation” on Tuesday.

You can see the dire trend Mr. Maley alludes to unfolding in the chart below… 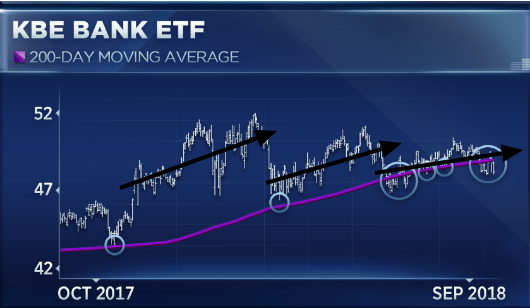 After the Fed stopped Quantitative Easing (QE) back in October 2017, three critical revelations happened that can be seen in the chart above:

This unfolding trend comes at a time “when things should be positive for the group,” according to Maley’s analysis.

At the time of this writing, all bank share prices in the ETF were still dropping, some over 2%. It’s “boom or bust” for the banks, according to the CNBC report.

Will This Economic Reality Finally Get the Fed’s Attention?

Even in the face of flattening big bank stocks that dip below critical averages, Chairman Powell would prefer to have you believe everything is just fine.

In fact, in a USA Today report about the recent rate hikes, his optimism seems to maintain a dual standard when compared to reality:

“Our economy is strong, growth is running at a healthy clip, unemployment is low,” Fed Chairman Jerome Powell said at a news conference. “This is a good moment for the U.S. economy.”

This may seem like a good “moment” for the U.S. economy, but only if you don’t look below the surface. Despite this, the Fed upgraded the economic outlook.

Of course, higher interest rates are designed to cool down the economy, so however good the economy is (or isn’t) right now, the rate hikes are supposed to “normalize” the market.

And a fourth rate hike for 2018 is already priced in for December, with more right around the corner.

Don’t expect bank savings or CD’s to pay out much higher either, those are stagnating around 1 – 1.5%, despite Fed hikes.

You’ll have to go down to a community bank to get anything close to 2%, according to Paul Davidson in another USA Today report.

That’s reality, whether Chairman Powell wants to acknowledge it or not.

The U.S. Economy May Be Set for a Bumpy Ride

Since the Recession a decade ago, the Fed doesn’t seem like it wants to face the reality of another severe correction.

So they bailed out big banks. They dropped interest rates to near-zero, and they injected billions of dollars of liquidity into the financial system.

Now they’re raising rates at an alarming pace, with several more rate hikes imminent. Inflation is on the rise, and who knows where unemployment may be heading. Plus, credit is vital to the U.S. economy, and it’s likely to get expensive.

Then you throw in trade war tension, mortgage bubbles, and increasing junk debt. All of these signs taken together point to a near-term market correction.

And this time it could be more severe than the “mini-correction” the U.S. suffered in February 2018. Especially since the “script” is eerily similar to a decade ago.

That means the ride is about to get bumpy. Make sure your portfolio can handle it.