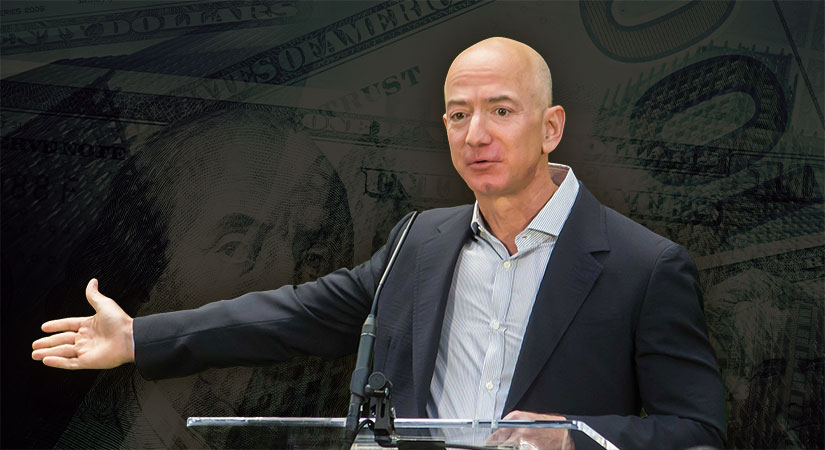 Composite, original images by bedneyimages and the free media repository

Whether the U.S. is technically in a recession right now is getting less and less debatable by the day. (You already know my thoughts on the matter.)

Now, even some members of the billionaire class are issuing dire warnings. For example, founder of Amazon Jeff Bezos (estimated net worth $120bn) just warned us not only that a recession is likely, but told us to “batten down the hatches.”

For some context, he includes a clip of Goldman Sachs CEO David Solomon (net worth $85-$100mm) telling us there’s a “good chance we could have a recession.”

Yep, the probabilities in this economy tell you to batten down the hatches. https://t.co/SwldRdms5v

During an interview with CNN, Bezos was even more direct:

If you’re an individual and you’re thinking about buying a large-screen TV, maybe slow that down, keep that cash, see what happens. Same thing with a refrigerator, a new car, whatever.

If you’re surprised to hear a person whose wealth depends, to a great degree, on consumer spending tell his customers to “slow that down,” well, frankly so am I.

In a recent report, Fitch Ratings went so far as to rate the upcoming recession! According to Olu Sonola, head of the rating agency’s U.S. regional economics department:

Unfortunately, as with all forecasts (even mine!), we won’t know what’s happening until it happens. At times like these, I believe it’s prudent to prepare for the worst and hope for the best.

So how can we do that?

How to prepare your finances for the recession ahead

Let’s assume that, unlike Amazon, you can’t cut costs by laying off 10,000 workers. Bezos had advice that everyday American families can follow.

First, as discussed above, rethinking consumption. Do you really need that new television? Is now the best time to go shopping for a new car? “Slow that down,” in Bezos’ own words.

Saving money where you can seems like a good idea. Obviously, that’s not an option for everything, like we discussed Wednesday. Some types of spending aren’t exactly optional – so when prices go up, we’re forced to pay them.

Second, in the CNN interview, Bezos directly addressed one of the major hazards I see in the current financial market. He advised:

Take some risk off the table. Just a little bit of risk reduction could make the difference.

Here are three practical steps toward “a little bit of risk reduction.”

Emergency funds are financial safety nets we build for ourselves. Sometimes, you just need more cash than you have readily available in the bank. Instead of paying outrageous credit card interest rates for a temporary loan, wouldn’t it be great to just rely on your own “rainy day” funds?

It’s hard to argue with an emergency fund – but how much should you set aside? The brokerage Vanguard advises:

Putting aside 3 to 6 months’ worth of expenses is a good rule of thumb, but sometimes it’s not enough. If you’re able, you might want to think about expanding your emergency savings. Don’t think you can save enough? Don’t panic. You can build up to it by stashing away smaller amounts on a regular basis, like every week or every paycheck.

By the way, I used the word “build” on purpose – like Rome, your emergency fund will not be built in a day. Think of it as a long-term investment in your own peace of mind!

“Don’t put all your eggs in one basket!” We’ve all heard this advice a million times.

This article tells us diversification as the best way to reduce risk, and explains a little more:

You won’t get the benefits of diversification by stuffing your portfolio full of companies in one industry or market – this can create higher risk.

Remember, to reduce company-specific risk, portfolios have to vary by company industry, size and geography.

(I would recommend considering whether or not you have inflation-resistant investments, as well…)

Since diversification is the subject of entire book-length discussions, I’ll simply move on to the next piece of actionable advice.

Here’s why safe havens are a good idea, in the context of economic crisis (or “systemic events”):

While such systemic events in the market are unavoidable, some investors look to buy safe-haven assets that are uncorrelated or negatively correlated to the general market during times of distress. While most assets are falling in value, safe havens either retain or increase in value.

A lot of Birch Gold Group customers are people who are tired of watching the financial news, exhausted with market volatility – people who want to focus on their careers, their families and their hobbies. The things that matter. They’re looking for a “set it and forget it” approach to saving for the future.

Would diversifying with physical precious metals, real gold and silver, help you “take some risk off the table,” like Bezos advised? If so, the Birch Gold team is here to walk you through your options.

And remember: the time you spend on these decisions today might just give you the peace-of-mind you need to ignore financial markets for years in the future.