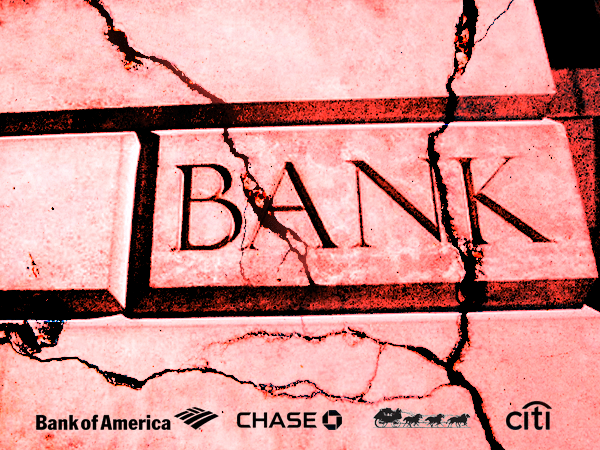 Most people still think big banks are “too big to fail.”

While banks don’t have to “fail” completely to have a huge impact on the economy, both Lehman Brothers and Washington Mutual proved back in 2008 that failure can happen.

Several big banks are currently in trouble, and all for unethical to illegal practices. When questionable activity comes to light, stock prices drop as a result.

And each of the banks in this article have committed multiple offenses since 2008. With each new offense, they are all pushing ethical and legal boundaries.

The resulting uncertainty in the market from these behaviors can have ripple effects on the economy. These are the institutions that take our deposits and issue loans, after all.

It’s this simple function, of taking deposits and creating loans, that lies at the base of our Central Banking System.

But as you’ll read, perhaps we need to rethink where we are putting our money…

As part of a crackdown by the Administration on unethical practices, Wells Fargo is facing enormous fines from the Consumer Financial Protection Bureau (CFPB).

These fines could total up to $1 billion if CFPB Chairman Mick Mulvaney has his way, according to Reuters:

The top U.S. watchdog for consumer finance is seeking a record fine against Wells Fargo & Co that could exceed several hundred million dollars for auto insurance and mortgage lending abuses, according to three sources with knowledge of the plans.

And this isn’t the first time Wells Fargo has been under the gun recently, with the bank facing its phony accounts scandal less than two years ago. Even the Administration itself isn’t cutting Wells Fargo any slack, and for good reason, it seems. The Reuters report explains:

The large fines would align with Trump’s public vow in December that Wells Fargo would face stiff penalties for charging fees to certain homebuyers to secure low mortgage rates. Trump said on Twitter that regulators would “make penalties severe” when companies are “caught cheating.”

Wells Fargo has been “caught cheating” before this recent litigation, of course. In 2017, a former mortgage banker filed a lawsuit that alleged the bank falsified records so it could blame borrowers for problems in processing.

That’s not a typo… the bank wanted to blame its customers for problems the bank was having processing records.

And all of this litigation is taking its toll on Wells Fargo, which plans to close 800 branches by 2020, according to CNN, drawing bipartisan anger in Congress. This follows the closing of 200 branches in 2017.

While it’s easy to keep pulling numerous examples of unethical and illegal activity to pick on Wells Fargo, they aren’t the only one…

JPMorgan Chase tries to clip their crypto clients, gets sued

You would think you were in charge of your money. Especially your credit card charges, since you are paying interest to the holding bank.

You might also think you could use your card to buy whatever you want, and only have to pay the required interest on whatever you charge.

Sadly, it appears that you would be wrong. JPMorgan Chase decided to try and play “middle man” by clipping its clients’ credit cards for cryptocurrency purchases.

You see, back in January, the bank stopped letting its customers buy cryptocurrencies with credit cards and instead began to treat such purchases as cash advances. Now, as a result, they’re facing a lawsuit in Manhattan federal court.

JPMorgan claims that they were worried about the risk involved with crypto. But the problem is, JPMorgan Chase didn’t warn its clients of the charges. The lawsuit claims that Chase “stuck the plaintiff with the bill, after the fact of his transactions, and insisted that he pay it.”

But the bank was also fighting 10,000 other lawsuits as of 2012, and was potentially $4.5 billion short in covering expenses related to those lawsuits.

Lawsuits take a long time to resolve, so who knows how many of those are left. In 2016, Chase settled out of court for $1.42 billion pertaining to a Lehman Bros. suit from 2008.

And finally, the “Big Kahuna” of big banks tries magic, and finds trouble…

Bank of America sued by FDIC for corporate “sleight of hand”

Finally, it looks like you can’t play “which cup is the ball under” and expect to get away scot-free from the FDIC, as the government agency is suing Bank of America for the $542 million that it owes to the regulator’s deposit insurance fund.

And as you would expect, BofA has been sued numerous times recently for fraud, misleading investors, and screwing over customers.

But no matter how big a bank is, eventually the financial walls must come crashing down in light of legal and financial trouble. In fact, Roger Arnold writes in TheStreet that it’s possible Bank of America might sink like the Titanic because of the imminent global recession:

If the current economic trajectory for global recession holds, and I think it will, one of the victims is going to be Bank of America (BAC). And it probably won’t survive.

Eventually you have to pay the piper.

Bottom line, since 2012, these 3 big banks are closing branches and have been having legal and financial trouble left and right. 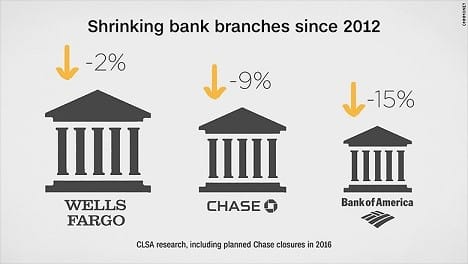 Some of the remedies big banks had 10 years ago are not available, short of a huge bailout offered by an insane Fed.

So it’s time to circle the financial wagons…

A place of calm in the storm

When insane banks are getting sued left and right, eventually your money may wind up in jeopardy. So it’s a good idea to protect it however you can.

Sometimes the best forms of protection are the most obvious. For example, Jeff Berwick cites some real statistics about Mark Cuban’s wealth:

While Big Banks are struggling to stay alive, precious metals are an eternal store of value for you and your loved ones. Your bank deposits, however, might not be.