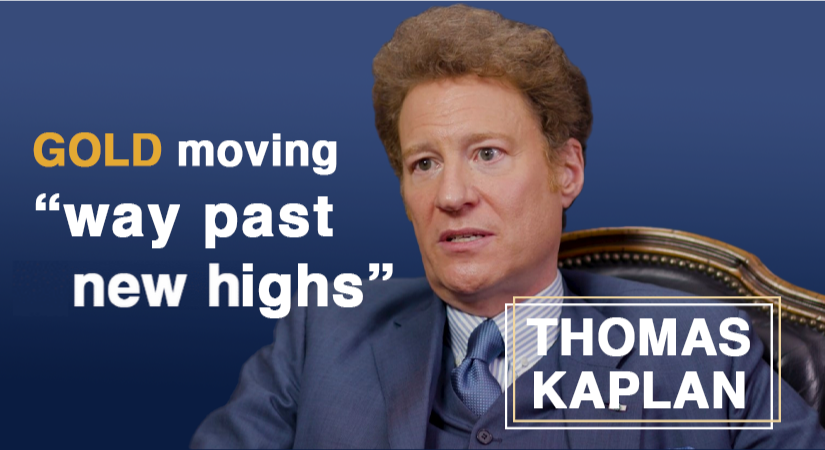 Image adapted from an interview with Real Vision

This week, Your News to Know rounds up the latest top stories involving gold and the overall economy. Stories include: Billionaire investor sees gold blazing far past August’s high, gold is scheduled for a re-run in 2021, and hoard of medieval gold coins unearthed in an English back yard.

The bull run in gold that saw the metal blaze to a new all-time high of $2,071 in August might have, at first glance, been a result of the pandemic. To be sure, the prevalent uncertainty and the multi-trillion dollar stimulus dump did their part in elevating prices above the previous high set in 2011. In an interview with Kitco, billionaire Thomas Kaplan explained why gold is really in a prolonged bull market that started in the early 2000s.

Kaplan, who did his doctoral dissertation on commodity supply and demand, said that gold is currently in the third wave of a decades-long uptrend. The first wave launched gold from $250 to $900, with the second wave pulling gold towards the $1,200-$1,900 range. And, as has often been pointed out by careful observers, gold was already on a bull run and had reached $1,800 before the pandemic.

The pandemic, however, has caused both investors and the average citizen to re-evaluate what money really is. Kaplan points out that a trillion dollars, which seemed nearly unfathomable just a few years back, now appears to have become “the new billion” in a staggering display of paper-money inflation. While not exactly good for the mining industry, Kaplan also highlighted the ongoing struggles when it comes to production, adding that new ore is not only increasingly difficult to find but also of a lesser quality.

“If Barrick is right, and [gold] production is declining by about 5% a year, for a number of years forward, we really are reaching a perfect storm,” said Kaplan, who also expects silver to rise along with gold and possibly climb to as high as $100.

Progress towards developing a vaccine in the U.S. may have given the stock markets some respite over the past few weeks, but question marks and red flags across the board are indicating another outperforming year for gold. Sprott CEO Peter Grosskopf and former U.S. Mint director Ed Moy are two industry experts who expect gold to continue its 2020 gains into 2021, as tailwinds haven’t changed.

Grosskopf ranks pandemic concerns at only third place on the list of gold’s drivers, below soaring and unsustainable debt in major economies and a historic expansion of money supply. These factors are likely to remain just as prominent in the coming year, paired with the now well-established environment of low to negative interest rates and a weakening U.S. dollar.

Moy believes that doubts surrounding the effectiveness of vaccine treatments and the strength of the economic recovery are poised to place gold on a strong upwards trajectory for several years to come. Market participants will also pay close attention to the Federal Reserve’s actions, including the inflation rate and how badly the national debt will affect government expenditure.

According to Grosskopf, a Joe Biden presidency could also shape up to be a major positive development for gold prices, as another bout of monetary stimulus is one of Biden’s primary goals. In addition, his administration will have to tackle the issues of massive trade and budget deficits.

During a regular gardening operation, a family in the New Forest district of Hampshire, England uncovered a large and somewhat peculiar stash of 63 gold coins and one silver coin minted during various periods between the 15th and 16th centuries. The family reached out to the British Museum to report the discovery and hopefully find out more about the origins and purpose of the hoard.

In a statement issued on December 10, the British Museum said that the coins depict different monarchs from Edward IV to Henry VIII and were most likely buried in the 1540s, King Henry VIII’s reign. John Naylor, a coin expert from the Ashmolean Museum at the University of Oxford, expanded upon the find. To Naylor, that four of the coins feature initials from three of Henry VIII’s wives (Catherine of Aragon, Anne Boleyn and Jane Seymour) stands out as an oddity. Most of the coins are “angels,” the workaday gold piece of the late medieval period, which feature an image of the archangel Michael killing a dragon (as described in the Book of Revelation). 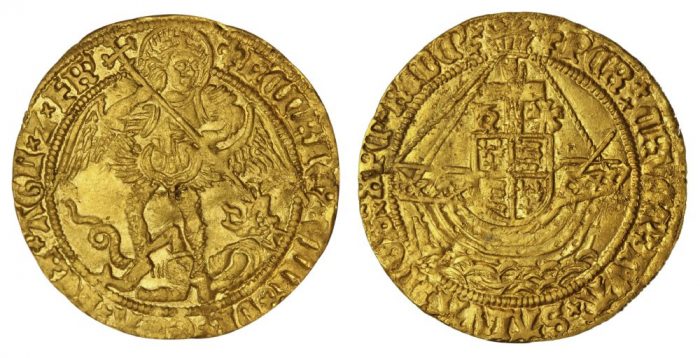 Detailed view of a gold angel struck between 1526 and 1544. Left: The archangel angel St. Michael spearing a dragon-like devil. ‘HENRIC VIII DI GRA REX AGL Z FR’ (Henry the VIII, by the grace of God king of England and France). Right: the reverse, an ancient ship with central mast as a cross, upon which is the Royal Arms, ‘h’ (Henry) and rose on either side. ‘PER CRVCE TVA SALVA NOS XPE REDE’ (By the cross save us, oh Christ our redeemer).

While the coins would fetch an extraordinary price if they were to be placed on auction today, the value of the stash is nonetheless conspicuously high and offers some clues as to the owner. Barrie Cook, a curator of medieval and early modern coins at the British Museum, revealed that the entirety of the hoard would be worth around £24 ($32) at the time (or the equivalent of $18,600 today), significantly above the annual wage during Tudor times. Naylor hypothesizes that the hoard might have belonged to a member of the clergy, as churches were known to create such stashes as a method of wealth preservation.

Both Naylor and the British Museum mentioned the importance of the find, with the museum stating that a representative in Milton Keynes is currently trying to find the coin’s owners. Milton Keynes is notable for a similar recent find, where 50 South African 1 oz gold krugerrands from the 1970s were likewise found in an area just outside of London. Although such finds are incredibly rare, if you’re planning a visit to Milton Keynes, England, you might want to bring a metal detector.