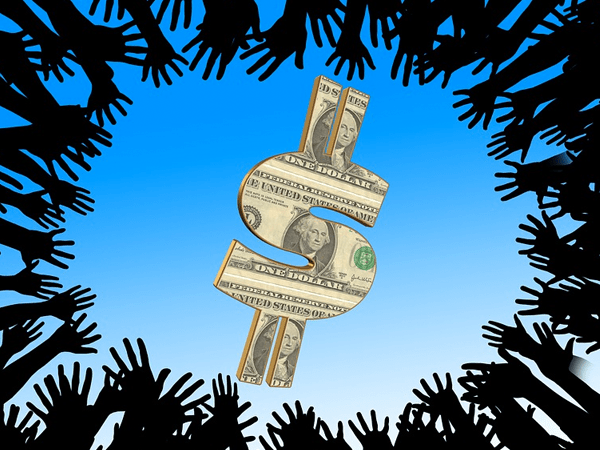 A new $1.1 trillion deal will keep the federal government funded until September, and politicians are calling it a big win. But average Americans might not be so quick to agree…

With the threat of a government shutdown looming, and the debt ceiling set to expire in a matter of days, Democrats and Republicans finally made an agreement on the federal budget. Congress is set to vote on the deal today, and it’s expected to pass through the Senate on Friday.

At first glance, the bipartisan nature of the agreement might lead you to believe that leaders on both sides of the aisle forced each other to cut spending. But that’s far from the case. Instead, the new budget represents one of the biggest plans for federal spending to date. And Americans are footing the bill.

Here’s what the bill means for you, and how you can keep your savings safe from what’s seemingly the greediest government in history…

During the campaign, Trump made federal spending a core issue in his platform. He told voters that cutting the federal budget would be one of his top priorities, and that he wouldn’t budge under pressure.

Several of the very spending items Trump vowed to cut are getting a budget boost. And many of the items he did want to spend on got the axe.

Essentially, this is a total reversal from what we heard on the campaign trail, and it isn’t good news for Americans.

The package does not include any funding for President Trump’s planned wall along the U.S.-Mexico border or a deportation force, according to a senior congressional aide.

In fact, the legislation specifically states that there cannot be construction of a new wall. The White House backed off of demand for wall funding last week after Democrats made it clear that they would oppose any bill that includes it.

The bill also does not fulfill the administration’s request for $18 billion in cuts for non-defense domestic programs, the aide said. CBS News reported earlier this month that negotiators were expected to ignore that request, partially because it’s so late into the fiscal year. Instead, the legislation includes spending boosts to domestic programs.

If approved by Congress, the National Institutes of Health (NIH), for example, would receive a $2 billion funding increase despite the president’s request to cut it.

Almost all of the Environmental Protection Agency’s (EPA) budget, 99 percent, is protected, according to the aide, even though the administration asked for a steep cut.

The deal delivers about half of Mr. Trump’s request for $30 billion more in defense spending. The aide said that it would include a $12.5 billion increase with the possibility of an additional $2.5 billion, which would be contingent on the administration’s strategy to fight ISIS.

It includes a permanent funding fix for retired coal miners’ health benefits, the aide said, as well as $295 million for Puerto Rico’s Medicaid shortfall. There are no funding cuts to Planned Parenthood in the package, the aide added, and it would restore year-round Pell Grants.

Meanwhile, Republicans are trying to save face, applauding the bill as a major bipartisan win.

The White House and some top GOP allies declared victory anyway, citing billions of dollars more for the military. Trump won a $15 billion down payment on his request to strengthen the military, though that also fell short of what he requested.

Vice President Mike Pence told CBS News Monday that the administration “couldn’t be more pleased” and called the agreement a “budget deal that’s a bipartisan win for the American people.”

House Speaker Paul Ryan, R-Wis., praised the bill as well, saying it “acts on President Trump’s commitment to rebuild our military for the 21st century and bolster our nation’s border security to protect our homeland.”

In reality, this bill is just a spending spree. Democrats will say they held Republicans’ feet to the fire, and vice versa. But really, it’s simply Democrats and Republicans doing as they please, while they leave Americans holding the bag.

Despite its enormous size, this latest spending bill will only tide the government over until September, the end of fiscal year ‘17. At that point, we’ll be back to square one.

Well, all the risks and threats we’ve discussed leading up to the budget deal at-hand will resurface: potential credit downgrades, collapse of the dollar, and market-crashing uncertainty.

Federal legislators narrowly avoided all those problems with this current deal. But there’s no guarantee a deal like this will come through at the last minute next time.

Which is why, come September, the stakes will be even higher…

What to Do as the Government Puts America Further into Debt

Leaders are treating the budget and economy like a big game of Monopoly. So what can you do to keep yourself safe?

The underlying value in these “real assets” can’t be destroyed by political incompetence, unlike more common investments Americans use to store their savings.

What “real assets” fit that bill? History has shown gold to be a star performer in both good times and bad, no matter what the government is doing. Take the past few months, for example. Before federal legislators came through with this band-aid deal in the final hour, the dollar was plummeting while gold and silver soared.

Politicians are digging Americans deeper and deeper into a hole of debt. Eventually, they’re going to run out of band-aids, and that time may come sooner than you think. Trump said himself on Twitter that September could be the breaking point, and that means this latest budget deal could be the beginning of the end.

Now isn’t the time to wait.