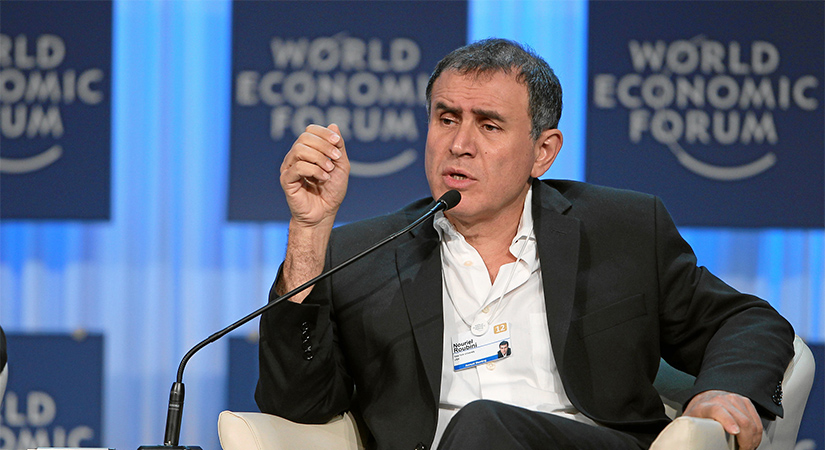 This week, Your News to Know rounds up the latest top stories surrounding gold and the overall economy. Stories include: A stagflationary decade could be the price we pay for three decades of moderation; going deep into the U.S. dollar situation; and Prada’s recycling is mostly a story about gold’s eternal value.

A decade of stagflation is the bill we pay for three decades of moderation?

Nouriel Roubini’s recent feature in Time magazine tells us what we already know: inflation has become a trendy word. Not only economists and analysts are talking about inflation anymore. These days, everyone appears to have woken up to the reality of wealth erosion and currency depreciation.

But will the masses, young and old, return to sleep if or when the inflation rate returns to the “normal” 2%?

Roubini isn’t too optimistic regarding the Federal Reserve’s prospects to get things in order, insofar as they were to begin with. He refers to the prior three decades as the Great Moderation. We aren’t too sure on that, and not just because everyone is obsessed with the prefix “Great” these days. There was plenty of abundance for plenty over the last few decades.

After all, the U.S. just recently printed some 80% of all of the dollars in the world. What is that, if not “wealth?” Well, it’s not “wealth,” it’s just currency. As Ron Paul told us:

Though it’s easy to confuse the two… And unfortunately, this confusion does tie into Roubini’s forecast for the next decade, which he refers to as the Great Stagflation. That sounds more believable. Along with inflation generally prevailing, Roubini also believes general economic weakness could start coming to the forefront in the worst time possible.

We are definitely seeing some of Roubini’s forecast already, namely the general uncertainty and whiplash sentiment in the markets. Investors seem desperate for a safe haven investment. Why else would investors be picking up bonds in a market that has collapse stamped into it? As Ray Dalio asked, “Why in the world would you own bonds?” Why, indeed?

Stocks don’t look much better, currently priced for a decade of 0% growth. Importantly, that’s not a prediction, simply a historical observation – and it’s rather close to GMO’s sub-1% growth forecast for the next seven years…

Regarding the assets to own in this coming decade, Roubini puts it as follows:

Investors need to find assets that will hedge them against inflation, political and geopolitical risks, and environmental damage: these include short-term government bonds and inflation-indexed bonds, gold and other precious metals, and real estate that is resilient to environmental damage.

It seems we’re seeing another trend that is picking up in frequency. Analysts list supposed safe-havens during what is generally agreed to be a coming recession. There is gold, with other precious metals looking perhaps slightly less attractive. And then the rest of the investment universe just pales in comparison.

So is the case here, as the alternatives are bonds in a collapsing bond market and real estate even though the latter can, apparently, sustain damage. The more we consider these options, the more attractive physical gold and silver seem. Especially for the long term.

This is how dollars are making gold’s performance look weak

Adam Hamilton dives into the U.S. dollar’s recent strength with as much force as we needed him to. As he notes on mining.com, we are in the middle of the biggest inflation spike since the 1970s. June’s inflation reading was the highest since November 1981.

We have a well-established track record of gold’s performance over time. While we still appear to be early in the inflationary timetable, we know that gold gained 322.4% between 1976 and 1980. The spikes back then started in 1972, and within two years, gold gained 196.6%. The two percentages are independent bouts of gains.

So what gives? If we are seeing such an inflationary spike now, why is gold down 17.9% since April? To Hamilton, it’s a straightforward tale of how the U.S. dollar moves in the paper gold market. We know that traders rule the gold market with contracts that allow them leverage of 29x. That’s simply astonishing. And when they see the U.S. dollar index reaching the highest point in over 20 years, they bet, and they bet big.

And that’s just the start of dollar bulls. As the Federal Reserve had its most aggressive hiking bout in history, other sovereigns started to look mighty unappealing. Europe, Britain, Japan… all sovereigns marked by low or negative rates and dismal showings against the dollar. Hamilton finds these currencies oversold, but that’s looking into the future. We’re in the now, and for all intents and purposes, the greenback has shoved gold aside as a safe haven. At least temporarily! (As I’ve written before, during crises, dollar strength is transitory while gold’s value endures.)

Is it too early to congratulate the Fed? It might be. The coming year or two will undoubtedly be interesting for the U.S. dollar. So far, we haven’t really seen inflation move down from the sky-high 9% range, which Hamilton finds euphemized. The Fed has signaled a break in hiking, perhaps until next year. Other central banks are moving into hiking schedules of their own.

It’s no secret that gold has performed very well in other currencies (such as the yen), gaining more than double than it did in dollar terms. What’s the difference?

Well, the faster a currency is failing, the more the price of gold soars. Exhibit A: 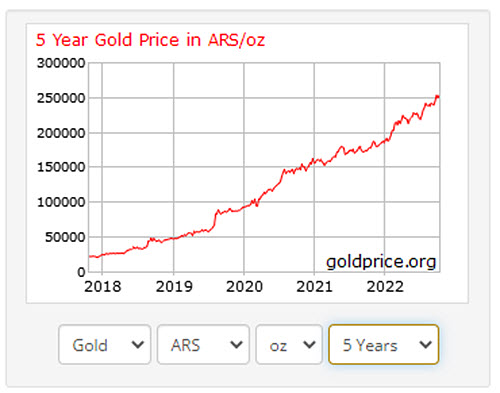 So what are we really unhappy about? If gold is only underperforming in the U.S. dollar, that tells us our economy is doing better than everyone else’s.

“Better” is a relative term. Currently, the U.S. dollar is simply losing more slowly than its major global competitors. Dollars outperform, at first, during times of extreme economic uncertainty or crisis. Most dollars are digital these days, are probably the most liquid asset, and what you’d need in order to buy something else anyway. Supply and demand works the same way in currency markets as it does in all the others. When everyone wants dollars, even temporarily, the value of the dollar rises.

That “something else,” very often, is physical precious metal. Physical gold and silver are not digital. They’re dug out of the earth, refined, processed, purified, shaped and minted – then physically moved into the owner’s vault or depository. Real gold and silver, tangible precious metals, are the exact opposite of digital assets. Dominic Frisby recently called gold, “the most analog asset there is.” Their real-world presence means that prices tend to move more slowly (leaving aside futures and options markets, which we discussed above).

Dollars are necessary, at least in the U.S., to buy gold. I’ve become convinced over time that, during a crisis, the market goes through three phases:

In stage 1, stocks and bonds plunge (often right along with gold and silver). Dollars rise.

In this simple model of crisis investing, dollars are just a necessary step between risky financial markets and safe-haven gold. Sometimes, just being out of risky assets is enough to soothe some investors’ minds.

When that’s not enough, and they finally realize that cash isn’t as safe as they thought, they’re forced to become buyers at the worst possible time – when everyone else also wants safe-haven assets. Like during the pandemic panic, when everyone wanted to buy and no one was selling (mints and refiners are still catching up with demand).

I’ve said it before, and I’ll say it again: Gold is best bought before the next crisis. Because by the time you’re certain you need it, not only will the line be much longer, the price will likely be much higher, too.

These days, virtues are very important to large corporations whose factories reside in nations without running water. It wasn’t that long ago that we covered various luxury brands committing to getting their gold and jewels from responsible and sustainable sources. (Definitely, Russia is out of fashion this season.)

Now, Prada debuts its first jewelry collection that focuses on sustainability. Don’t we all love sustainability? As the fashion giant reveals, trends are changing among wearers of luxury brands, though not too much for comfort.

The Wall Street Journal tells us a little bit about gold’s timelessness:

If you’re wearing any gold jewelry today, it may be reincarnated from another bauble, linking you to the past. Gold, a remarkably durable metal, has historically been “melted down to make new, fashionable things,” explains jewelry historian Beatriz Chadour-Sampson. So that chain you’re wearing right now might be descended from a gaudy 1980s dove brooch or a dainty Victorian locket. Unlike diamonds, which have been commonly used in jewelry only since the 15th century, or organic, delicate pearls, gold is quite literally timeless.

“Gold is quite literally timeless.” When you hold an American gold eagle in your hand, you can literally feel the history – the gold in that coin might’ve once been part of Sargon of Akkad’s crown or a bit of the ransom Cortés extorted from the Aztec empire.

Roll your eyes all you want, but Prada’s line of gold that uses recycled jewelry is exactly the kind of utility that gold investors like to see. It lets wealthy fashion enthusiasts wear luxurious, expensive adornments while letting everyone know how passionate they are about things like human rights and the environment. “Green gold,” if you will. And this jewelry line is bringing it to new levels.

We don’t know what will happen to that heap of Prada necklaces a decade or a century from now. But in case trends change again, isn’t it amazing that they’ll be able to produce a gold bar to be sold to a no-nonsense industrialist?