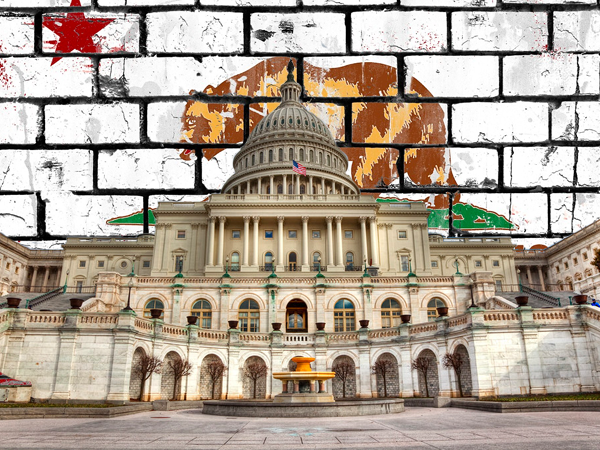 Government bailouts are being revived, and this time, unlike during the 2008 recession, it appears large financial companies won’t be the only ones asking for help.

The problem is, the government may not be able to help this time.

In response to a bloated state budget and a massive debt of over $550 billion, Newsmax reports that California Governor Gavin Newsom is looking for a bailout from the federal government:

Without an infusion of at least $14 billion from Congress, Newsom said the state would have to cut billions to public schools, not to mention hundreds of millions for preschool, child care and higher education programs. It’ll also need to eat into health benefits for the poor, among other things.

“The enormity of the task at hand cannot just be borne by a state,” Newsom said. “The federal government has a moral and ethical and economic obligation to help support the states.”

Obviously, Newsom’s decision to impose lockdowns in response to the coronavirus pandemic, resulting in more than 746,000 unemployed, partly explains the sudden need for cash.

Economist Robert Wenzel thinks the “lockdown is projected to lead to a state budget shortfall this year of $54 billion,” which is bound to make things more complicated.

Wenzel added another sharp critique of Newsom’s request for a bailout, and a comparison to Greece’s economic bust in 2007:

[Newsom] is now in begging mode just like Greece was, but, whereas a lot of Greece’s financial trouble was about paying off old debt, California’s problem is about running the current state government (and also local governments).

It sure seems like California has been playing a dangerous debt game, first ignoring economic realities prior to the pandemic, and then asking the federal government to send bags of cash so things can keep running smoothly.

As the largest state economy in the United States, if this dangerous game blows up for California (like it did for Greece), the ripple effects may prove too much for the U.S. economy to handle. Especially if other states follow suit.

The Economic “Catch 22” That Can Affect Every U.S. Taxpayer

This isn’t the first time California has begged Congress for billions in cash. In fact, about 10 years ago, they requested $7 billion, but also had their spending habits criticized by Citizens Against Government Waste:

… although California is struggling to pay for its basic necessities like education and welfare, they will still spend $3 billion over ten years on embryonic stem cell research.

With frivolous spending tendencies like this, can Newsom even be trusted to spend Congressional bailout money appropriately?

This is an important question, but it may actually be moot. That’s because the federal government’s hand may be forced:

Coronavirus has “blown a hole” through state budgets nationwide, said Jeff Chapman, director of state fiscal health at the Pew Charitable Trusts… Failing to help the states could exacerbate the recession.

Thus, it’s a Catch-22 for Washington. By helping California, they’d be rewarding financial recklessness. But by not helping them, the U.S. economy could be dragged down by the weight of the state.

And regardless of what happens, taxpayers from the other 49 states would be caught in the middle.

Sanjay Varshney, professor of finance at California State University added a dose of reality: “I’m not sure if they can keep putting unlimited amounts of money on the table to keep bailing out every part of the economy,” he said. “There’s just not enough dollars.”

Finally, Wenzel finished his piece by comparing the incentive behind Greece’s bailout in 2007 to Governor Newsom’s request:

The Germans, who were the primary objectors to a Greek bailout, had more incentive for that bailout (the banksters wanted it) than President Trump and McConnell have to bail out Newsom.

So if Wenzel is right, and the incentive to bail out California isn’t there, any recession the U.S. encounters has the potential to be severely exacerbated by the largest state economy in the country.

Ensure Your Retirement is Healthier Than California’s Economy

Thanks in part to Newsom’s coronavirus lockdown orders, California is suffering from a heaping helping of budget shortfalls and pension problems.

Bottom line, the economy in California is imploding along with the state’s ability to pay its obligations. But you don’t have to let your personal “economy” suffer in the same way.

So consider bolstering your savings now. Look into retirement options that are known for their security such as diversifying with precious metals like gold and silver.

Unlike California, you may not be able to rely on government bailouts when you retire but at least you’ll have a plan that can make you more secure.