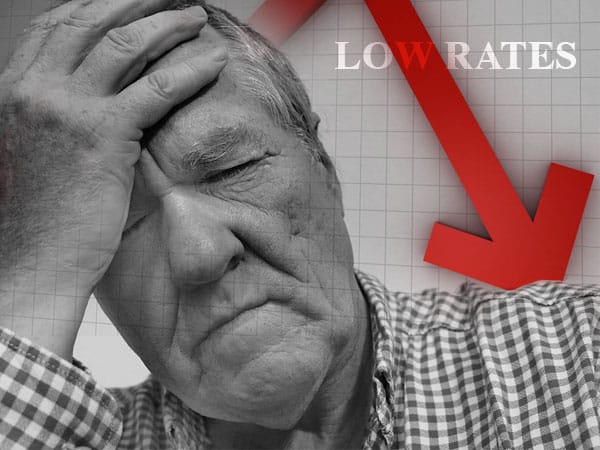 Central banks around the world, including the United States Federal Reserve, are making a costly sacrifice that puts the American public’s financial security at risk in exchange for short-term economic stimulation. While their policies are indeed giving assets a boost, they’re also creating a dangerously uncertain future for retiring Americans. The worst part, says Doug Dachille, CIO of AIG’s $350 billion portfolio, is the banks “don’t give a darn” about who these policies could hurt the most… you.

The dark side of low rates

Most of us would assume that if something helps the economy, then it must be a positive thing for your financial future no matter what. However, that isn’t necessarily the case with low interest rates. Central banks use them as a shot in the arm for struggling markets – and they can be helpful – but they’re a real double-edged sword for anyone thinking about retirement.

Dachille makes it easy to understand why. He uses the classic accounting principle of assets and liabilities to explain why central banking policy is effectively offering up your savings on the sacrificial altar of economic prosperity.

“All this reduction in interest rates, while it’s certainly been good for the appreciation of the asset side of everybody’s balance sheet, unfortunately it’s increased the value of the liability side of the balance sheet,” he said on “Squawk Box.”

What Dachille is saying here is that while low rates stimulate the economy and help savers’ retirement assets appreciate in value, low rates also increase inflation and obfuscate the ultimate cost of retirement.

So any benefit that low rates may have for those saving for retirement gets canceled out by the unknown future liabilities they create!

“The average person doesn’t know the implicit liabilities that they have,” Dachille said. “They know the explicit [liabilities]; you have credit cards, mortgages. But they don’t know the present value of all their future liabilities when they’re not earning money any more in retirement.”

Most frustrating of all, central banks have no clue how any of this will pan out.

“We’re not sure there’s a wealth effect from putting all rates at negative or zero,” Dachille added.

Do you have to just sit back and take it?

As central banks push onward with little regard for the people their policies ultimately impact, you’re forced to make the best out of a bad situation. And for those who are already on the cusp of retirement, many are choosing to delay their golden years to avoid running out of money. Others are going ahead and taking the plunge, but continuing to work part-time.

Obviously, neither option is ideal.

If you’d like to avoid having to take a similar path, a sound investment strategy implemented now is the best measure of prevention. Allocating a portion of your savings to gold gives you the time-proven security you need to keep misguided central banking policy from derailing your retirement, as these policies unfortunately will likely do for many others.