Home » Blog » Why Are Chinese Leaders Rushing to Buy Gold?

Why Are Chinese Leaders Rushing to Buy Gold? 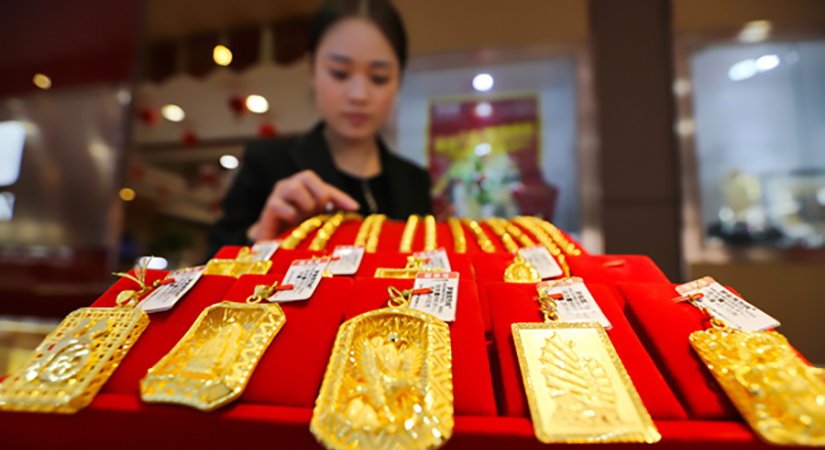 This week, Your News to Know rounds up the latest top stories involving gold and the overall economy. Stories include: Western gold is going East again, precious metals’ expert’s take on Bitcoin and gold, and gold is dead alongside crypto, apparently.

Once again, gold is flowing out of the West, into the East

You’ve heard the old saying, “He who has the gold makes the rules.” Keep that in mind as we discuss this story…

There’s a widespread, longstanding notion of Western gold being sold East, to China and India and even the Middle East. Is it true? Honestly, it’s open to debate. Some believe the world’s gold supply moves back and forth across borders cyclically, in a long slow migration that takes decades. Others hold there is a broad and ongoing flow of gold bullion, one that has been underway for years or even decades, and that net gold sellers are making a historic mistake.

This Bloomberg report mentions the cyclical nature of gold buying. When Western interest rates go up, gold flows East. But in this hypothesis, when does gold come flooding back into the West?

As always, we like to take a look at the data (although we listen to the rumors, we tend to trust data more).

It’s no secret that Russia and China are plotting to build their own economic exclusionary zone. To that point, CME reports that 527 tons of gold left New York and London vaults in the first four months of the year. At the same time, Chinese gold imports have risen to a four-year high.

China only recently, in 2021, began allowing gold imports again, presumably because domestic demand simply outstripped domestic mining supply of 6,830 tons since 2000. Did you know China has been the world’s largest gold mining nation since 2007? And that more than half of China’s gold production is managed by state-owned enterprises? Finally, China keeps the gold it’s mined – exporting domestically-mined gold is illegal!

If we turn back the clock a bit, we can see that China’s official gold reserves have increased five-fold in the last two decades (not coincidentally, during the same period where the Federal Reserve began aggressively supporting the U.S. stock market, first under Alan Greenspan, then Ben Bernanke and the rest). You’d expect gold reserves to increase when a nation doesn’t allow gold exports…

But China isn’t only the world’s largest gold producer, they’re also the world’s biggest gold importer. Records of gold imports are extremely difficult to come by, but we know that 6,700 tons of gold were sold to Hong Kong alone since 2000.

On the rumors front, well, just to spare you the math, it’s not unreasonable to estimate that China holds, as a nation, some 31,000 tons of gold. That’s about 17% of all gold in the world.

Although the Bloomberg article suggests that the nature of this movement is cyclical and that it’s based on high interest rates in the U.S., we have to question both. Personally, I’ve never heard about cheap Asian gold being prudently hoarded by the West. We have, however, heard plenty about the Federal Reserve “leasing out” its gold reserves to ease storage difficulties — thereby, losing possession of it. Considering nobody including China really finds Treasury bonds attractive anymore, I wonder if there’s more to the story. (Pro tip: buy your gold now.)

And if there is, we expect the over-leveraged paper gold market to collapse completely, obliterated by the number of demands to deliver imaginary gold…

Not too long ago, we covered Dominic Frisby’s fairly insightful views into platinum group metals. These days, he is more concerned with governments, and how gold and Bitcoin tie into it. Frisby is anti-fiat and not a big fan of governments, having issued a blog post over a decade ago outlining the fiat fraud.

There, he talks about how the fiat monetary system is innately a top-down one: the more one moves away from the issuers of fiat, the less one benefits from it. Because governments are issuing fiat, they are the primary beneficiaries of its existence. Its purpose is to fleece the populace one way or the other, with inflation being the usual culprit as is the case now prominently.

Frisby finds investing in gold almost a necessity as a way for the average person to combat the aforementioned. He puts bitcoin in the same category, having started in the 90s with gold investment before adding bitcoin to his portfolio. There is an interesting quote from his interview with Crypto Slate, which generally praises the benefits of crypto over gold:

The problem with gold is that it is the most analog asset there is… So, in that world, do you really want the burden of gold when all the wealth is digital? And I question that.

We have a lot of good things to say about bitcoin. However, Frisby’s claim that “all the wealth is digital” is utterly misguided and completely incorrect.

Now that that’s out of the way, we can’t help but notice that everyone today is awfully concerned with reinventing the wheel. I’m reminded that, as early as 1908, we heard tell of Nikola Tesla’s “death ray” – and by the 1940s, scientists were experimenting with directed energy weapons. So soldiers should be carrying laser rifles into battle, right? Well, guess what: the U.S. Army still uses devices that launch chemically-propelled metal slugs at their enemies. From the Battle of Towton in 1461 to the Battle of Kyiv today, battles are fought with guns.

Both Tesla’s death ray and cryptocurrencies share a few key weaknesses. (I’ll leave the specifics up to your imagination, but here’s a hint: electricity.)

To someone reading about Tesla’s directed energy weapon in 1908, a Winchester repeating rifle or a Colt Single-Action Army revolver probably sounded obsolete – and, in all honesty, probably was obsolete. But you know what? Obsolete or not, the rifle and the revolver both worked. Fully-functional examples of both exist in museums across the nation, and are tucked away in gun safes and nightstand drawers today.

I do agree with his claim that gold is “the most analog asset there is.” I believe that’s a massive part of its appeal – the same way those firearms I just mentioned are, also, analog. Simplicity has an appeal all its own, and maybe it’s simply not for everyone? Regardless, gold is exactly obsolete as it’s always been.

When crypto experiences a bear market, we’re treated to mainstream media cries in the tune of, Is crypto dead? But surely, the gold market is immune from such speculation, and investors know better by now… right?

As Frank Holmes tells us, apparently not. Perhaps rather than expecting the market to disappear overnight, those telling us gold investment is are merely dissatisfied with how it has performed in the “everything selloff.” Gold is down 9.5% so far this year, after all. Surely that means no one wants it anymore, right?

You’ll have to forget for a moment that nearly every asset class plummeted much more – there are a few exceptions, like West Texas Intermediate Crude, which is 10% higher today than at the end of the year. Does that mean the Nasdaq, the S&P 500, the U.S. Treasury market are all dead as well? Of course not. The people who say an asset or an asset class is dead are nearly always disappointed speculators whose gambles didn’t pay off the way they hoped.

If we take another look at gold’s price, we see it’s down only when we price it in U.S. dollars. The Canadian dollar, the euro, the yen, the pound, the Turkish lira… These are all currencies in which gold is in the green this year. So gold’s performance in dollar terms is, more than anything else, reasserting the tale of the greenback’s unusual and dubiously sustainable strength. (Click the link – this has happened before. When people are afraid, they look to cash first, then to gold…)

Turkey’s annual inflation rate of 80% has destroyed the lira even further, if that was somehow possible, plunging it by another 52%. As a recent survey showed, Turks very much favor gold as a store of wealth.

But why should us greenback holders care?

Whether we look domestically or globally, the question appears to be the same: how long until a recession happens? Holmes, like many, is hesitant to draw parallels to the 2007-2008 housing crisis, but does it nonetheless. A market crash brought on by recessionary conditions appears to be in the works in the U.S. and globally. When that happens, we know that the Federal Reserve is going to print money. And when that happens, we know what the USD/GLD chart will look like.