Gold sales have exploded, quadrupling from one year earlier. Is this the new trend for the metal? Find out here. 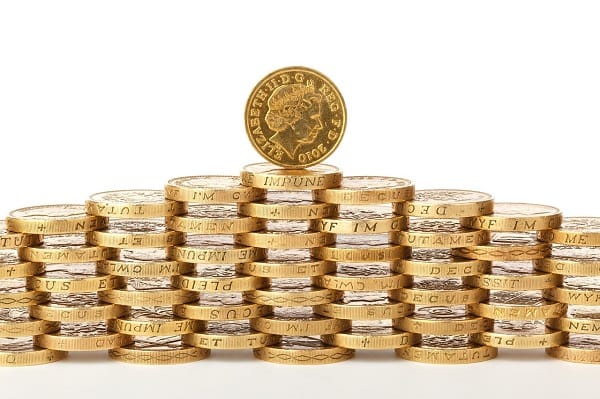 This week, Your News to Know brings you the hottest topics in finance and the gold market. Stories include: American Eagle gold coin sales quadruple, Russia becomes world’s largest buyer of gold, and why Deutsche Bank advises clients to buy gold.

Spot gold has been doing quite well recently: February 11th saw gold prices hit $1,260 an ounce, not only reaching its highest level in a year but also posting the biggest one-day gain in the past seven years.

Yet U.S. bullion dealers noted that rising prices are actually prompting Americans to buy more in what is now seen as a “coin buying frenzy”; these people are betting on volatile currencies and global economic concerns lifting prices even higher.

The U.S. Mint is a notable beneficiary of gold’s latest rally, with Newsmax reporting that the Mint sold 83,500 ounces of American Eagle gold coins in February alone. This means that gold coin sales quadrupled on a year-on-year basis. Likewise, American Eagle silver coin sales reached 4.78 million ounces in February, translating to a 58% increase compared to a year ago.

While a 16% increase in the span of two months is impressive on its own, gold’s 2016 rally is even more notable when taking into account that some big investors and money managers – from John Paulson to Soros Fund Management LLC – had given up on the metal around the turn of the year.

Russia is now officially the world’s largest buyer of gold

Russia’s love of gold and its massive bullion purchases are well-documented. In 2014, for example, The Daily Telegraph noted that the country took advantage of struggling gold prices to buy 55 tons of gold, which was “a lot more than other countries.”

But now, Pravda Report notes that Russia has officially become the world’s largest gold buyer. According to International Monetary Fund (IMF) experts, Russia’s central bank acquired $688,000 ounces of gold in January, with the Bank of Russia’s spokespeople announcing that the metal now accounts for $52 billion of the nation’s $368 billion in gold and currency reserves.

Some believe that this is part of Russia’s concentrated plan to undermine the U.S. dollar and the West in general. Prominent German newspaper Die Welt is one proponent of this theory, with the paper’s economists speculating that gold is being used to stand in the way of Western currencies, and going as far as to say that Russia’s acquisitions are a part of Putin’s plan for world domination.

“This is a quiet attack on the almighty dollar. Russian President Putin buys a lot of gold without attracting much attention to it. As long as political circles fear a new cold war between Moscow and the West, this war has already erupted in the financial sector,” wrote Die Welt, with its analyst Holger Zschäpitz stating: “It appears that Russia and China have indeed decided to create a counterweight to the supremacy of the dollar,” adding that “the Kremlin has been secretly and purposefully buying gold for eight months already.”

China is certainly playing the part, with reports stating that the Chinese central bank bought around 520,000 ounces of gold in January, although no official confirmation has been made. Several Chinese publications expressed their belief that China’s enormous gold reserves might end up crushing the U.S. currency, while also noting that Russia doubled its reserves since 2005.

Recently, gold has rallied 16% against the euro, 17.5% against the dollar and even 9% against the resurgent yen, giving many a more optimistic view of the metal. Prominent German banking firm Deutsche Bank could be called one of the newly-turned optimists: It raised its forecast for Q4 gold prices by 26% and has given clients an extensive explanation of what makes gold a sound investment.

As reported by CNBC’s Leslie Shaffer, the bank presented solid arguments as to why it pays to buy gold right now. “There are rising stresses in the global financial system; in particular the rising risk of a U.S. corporate default cycle and the risk of a sharp one-off renminbi devaluation due to the sharp increase in China’s capital outflows,” Deutsche Bank said, calling gold “warranted” as an insurance purchase.

Indeed, in its Friday statement, the bank drew comparisons between insurance and gold at its current levels, noting that the former is often a grudge purchase that is nevertheless of vital importance.

Deutsche Bank also mentioned holding costs as a reason to store value in gold. Even though it’s sometimes looked down upon as a non-yielding asset that costs money to store, the yellow metal is quickly becoming appreciated in a world of negative interest rates.

Other than rising risks and a negative-yielding environment, a lack of global growth was also named as a factor that gold can benefit from – the slower the growth, the lesser the risk of prices falling off. “Gold has tended to underperform in an environment of strong global growth, so whilst not an outright tailwind, slowing growth certainly eases the pressure on gold,” said the German Bank’s note.

Is the government working on banning cash? Read about this here.