Home » Blog » Coronavirus Fears Are the Catalyst for Gold’s Surge

Coronavirus Fears Are the Catalyst for Gold’s Surge 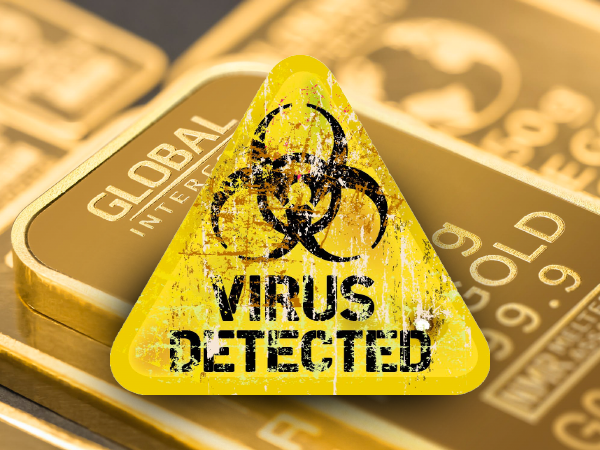 This week, Your News to Know rounds up the latest top stories involving gold and the overall economy. Stories include: How the coronavirus could be the catalyst to push gold over $2,000, gold’s perfect storm is here, and how concerned should investors be about the dizzying repo market?

As Apple announced last week that it would miss its quarterly forecast largely due to coronavirus-related complications in China, fears that the outbreak would take a toll on the global economy became palpable. Investors wasted little time rushing towards safety, pushing gold above its seven-year high of $1,600. Since then, the metal has kept on climbing, having most recently hit nearly $1,690 on Monday.

According to Citi’s analysts led by Aakash Doshi, this kind of outperformance is merely the beginning of a bull run for the ages. The team recently published their short- and long-term forecasts, revealing that the metal has enough momentum to breach $1,700 over the next six to 12 months.

However, their expectations for gold over the 12-24 month periods are even more bullish, as the team expects gold to pass its all-time high and climb to $2,000 during that time. Doshi and his team see many more drivers powering gold than just a coronavirus-related economic slowdown. As Doshi pointed out, investors were already concerned about the state of the U.S. economy and the contracting global growth throughout 2019.

These worries are bound to become more prominent as supply chains begin to feel the toll of the outbreak. Besides the coming U.S. election, Doshi’s team sees several other strong drivers that are sure to keep pushing gold up, including a new global norm of negative-yielding rates, the likelihood of additional rate cuts by the Fed and the worsening of the U.S.-China trade war as the coronavirus begins gripping the Asian nation’s economy.

Talks of a so-called perfect storm in the gold market have been going on for some time, as numerous red flags regarding the domestic and global economy were largely ignored due to the longest-running bull market in stocks’ history and the Fed’s hawkish stance. With the latest developments that have swung gold strongly above the $1,600 level, Kitco’s David Erfle thinks that the much-awaited perfect storm is right around the corner.

As Erfle points out, gold has been on an uptrend ever since its bottom in August 2018, when the metal hit a low of $1,167. And although gold has risen slowly but steadily since then, Erfle expects the upcoming price gains to be anything but slow, forecasting that the metal will reach $1,800 in the next few months. The primary reason for this will be a shift in sentiment where gold demand is not only powered by fear, but also a desire for returns as investment options grow scarcer and the gold market continues to soar.

The aforementioned red flags were recently acknowledged by the International Monetary Fund (IMF), which said in a note that the global economy faces many risks, ranging from the coronavirus to a possible spike in U.S.-China trade tensions. China’s central bank joined the club of rate cutters as it sliced both its one-year and five-year prime loan rates as a cautionary measure in response to the coronavirus halting the nation’s tourism and impeding local businesses.

The Fed is now doing the opposite of its recently-stated desires as it continues to expand its balance sheet to unprecedented levels, while also hinting towards possible rate cuts and different measures in order to reach its targeted inflation rate. Central bank actions have been among gold’s biggest drivers, with sovereign bond yields reaching all-time lows. Right now, close to 25% of the European sovereign debt and 15% of its private company debt is yielding negative returns, and Erfle doesn’t see the situation turning anything but worse.

The overarching theme of a lack of confidence in the global economy among investors will be reinforced by a monetary crisis that is threatening to pour over from the eurozone into the U.S. As an exceeding desire to own havens coincides with a loss of faith in most assets, Erfle expects gold to fully reap the benefits of being the only reliable standout that investors can turn to.

Is gold the answer to the increasingly concerning repo market in the U.S.?

Despite being often overlooked, the repo market acts as a key part of the U.S. economy, with a daily turnover as high as $1 trillion. To see the ill effects of a collapsing repo market, one need not look further than the 2008 crisis and the recession that followed, both of which were deeply rooted in troublesome repo valuations.

As Arkadiusz Sieron notes on FXEmpire, these valuations are quickly shaping up to give off even worse looks than they did pre-crisis. Since 2008, the Fed has pumped as much as $500 billion into the repo market while maintaining that it is not engaging in quantitative easing (QE). Yet the numbers tell a different tale, with the central bank now purchasing $60 billion in Treasuries every month and, in doing so, ballooning its already-excessive balance sheet.

Sieron singles out September 17, 2019 as a prime example of how forceful the QE in the repo market has become. On that day, the intraday range jumped to an incredible 700 basis points, which boggles the mind when considering that interest rates in the repo market generally fluctuate inside a range of 10 to 20 points.

Despite various assurances from officials that the incident was a one-off caused by a conflux of factors, Sieron remains unconvinced, as little has changed in the repo market since then. In the simplest of terms, the repo market acts as a major source of concern for the domestic economy, reflecting an excessive amount of bonds and not enough cash on central banks’ part, while also bringing to light the troubling amount of fiscal deficit.

Most can agree that QE programs almost invariably benefit gold, especially when there is a lack of confidence that they will truly help the economy. One might say that this confidence is at its lowest point in a while, and Sieron thinks that the Fed’s denial in regards to QE policies only exacerbates the issue. Besides the obvious and unwanted expansion of the balance sheet, the amount of money that the Fed is pumping into the repo market means that an exit could be catastrophic, further strengthening the case to turn to gold before these issues can no longer be swept under the rug.