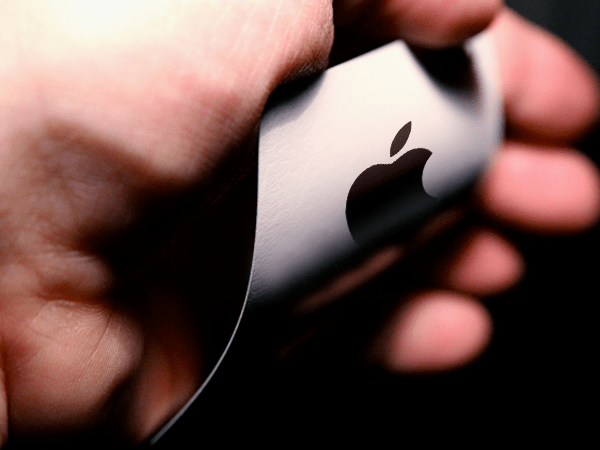 When an illusionist is performing a card trick and makes “your” card appear in your pocket, they’ve likely used a sleight of hand maneuver to pull it off.

When big companies prop up the market with hype and promises, and get rewarded with hype-justified market caps, it feels like they’re also using a sleight of hand to pull it off.

But like an illusionist, you have to catch them doing their trick, and they won’t willingly reveal their bag of secrets. The good thing about reality, though, is that even the best illusionists can’t escape it.

On Tuesday, according to Reuters, some bigger companies reported they went on a stock share shopping spree:

U.S. companies continued a shopping spree for their own shares in May, making $173.6 billion in buyback announcements, the highest monthly total ever, according to a research report.

Share buybacks are a normal activity, but the recent record-setting pace of stock buybacks is alarming.

Take a look at the bar graph below from a June 5th report by WolfStreet, and you’ll see that actual buybacks by S&P 500 ending Q1 totaled $178 billion: 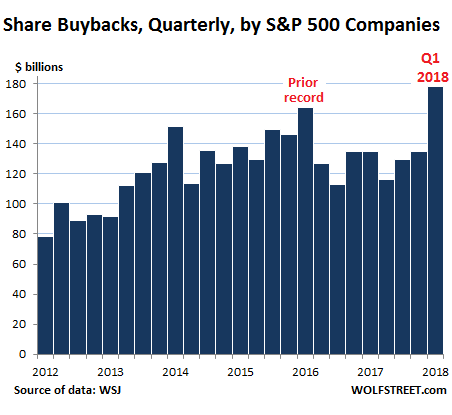 That record buyback pace is unsettling enough, but thanks to new tax incentives, in May, U.S. corporations announced the potential buyback of $173.6 billion.

Wolf Richter explains the reason why these sudden announcements of big buybacks are happening (emphasis ours):

So these companies are taking this “hit” of cash and using it to buy back overvalued shares. Which begs the question, “Then what?”

That will likely be answered with an expiration date for this market “crash insurance”, as Richter put it. To see one reason why, let’s examine one company’s “sleight of hand.”

Apple Says “No Empty Market Cap Increases Up Our Sleeve”

One of the best “illusionists” is Apple. You do have to give them credit, any company that hypes a $1,000 phone where another model that costs much less does enough, certainly creates “magic” around its offerings.

But that’s not the only trick up Apple’s sleeve.

In their 2Q results announcement they announced the possibility of another $100 billion in share buybacks, likely because of the new tax incentives. They also announced they would complete their previous $210 billion buyback in the third quarter.

That’s a lot of stock buybacks. And then we have the corporate “sleight of hand”…

The media hype surrounding this announcement and the large dollar amount of the buyback using the one-time “repatriated funds” reported earlier in this article increased Apple’s market cap by $118 billion.

It’s a sort of “rob Peter to pay Paul” move that used to border on being illegal before law changes in the Reagan administration. But in 2018, it’s another tool in an illusionist’s bag of tricks.

And eventually, these severely overpriced shares will have to find real buyers, not illusionary ones.

Also, because companies like Apple are using this type of “illusion” to line their shareholder’s pockets and not putting funds back into employee wages and capital investment, the economy suffers.

Meanwhile, as the corporate economy’s “crash insurance” runs out, another illusionist is telling us to look the other way…

The combined market cap of the largest tech companies (referred to as FANGMAN by Wolf Richter) is at $4.16 trillion.

That means companies like Facebook, Amazon, Netflix, Google, Microsoft, Apple, and Nvidia can buy anything they want.

That wouldn’t be a problem, except they can also buy at prices that are unheard of. And according to a different WolfStreet report, Goldman Sachs wants a piece of that action:

We saw a demonstration of this principle today. Microsoft’s planned purchase of GitHub for $7.5 billion – $7.5 billion, and no one even raised an eyebrow about the amount! – shows that these companies share one thing in common: Money is no objective because of their inflated – I mean, fundamentally sound – market capitalization.

GitHub is not likely to be worth the amount Microsoft wants to spend. Not even close. Inflated purchases like this indicate poor fundamentals. Richter continues:

That enormous market cap gives them enormous financial power and resources that allow them to buy anything and possibly anyone for any price, and Goldman Sachs wants to get its slice of that pie.

But when these over capitalized illusionists are compared to the dot-com bubble companies of the 1999 – 2002 era, Goldman Sachs takes the position that “this time it’s different, because of good fundamentals.”

The same fundamentals that have us heading right into a recession, led by companies that are robbing Peter to pay Paul.

Is this time really different? It doesn’t look like it. That’s why now is a good time to make sure you own some real “crash insurance” that can help you hedge your bets against the “illusionists.”