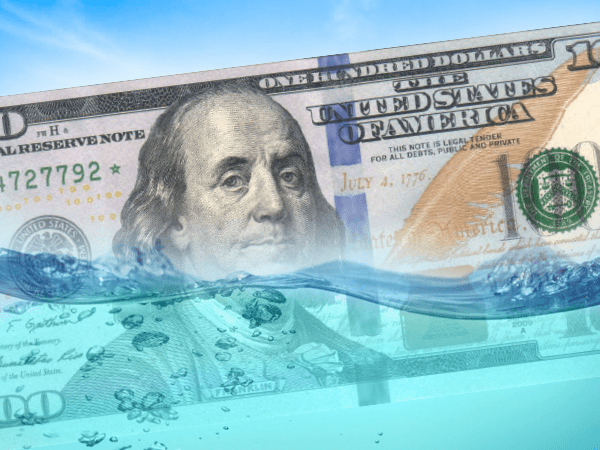 The U.S. Economy is approaching an “economic iceberg” in the form of an insane corporate debt load.

Companies in the U.S. have taken on a record $6.3 trillion in debt. This is more corporate debt than 2007, just before the last major recession.

And according to S&P’s analysis, which looked at 2017 year-end balance sheets for non-financial corporations, the riskiest borrowers are more leveraged than they were even during the financial crisis.

The Week reports corporate debt has already surpassed 45% of GDP in March 2018. That is a higher percentage than all of 2008.

Plus, more corporations are “leveraged out,” which means the resiliency they might have had in 2008 has since evaporated.

Any big shock to the economy is sure to have disastrous consequences if companies can’t recover because they’ve already used up all their leverage.

Over 37% of high risk debt is leveraged loans. Add in a giant cash shell game (the 1% problem), and that can become a gaping hole that sinks the U.S. economy like the Titanic.

What’s even more frightening is that the growth from these risky companies has been propping up the market during the growth period since 2010.

Which “Shell” is the Corporate Debt Hiding Under?

Big companies like Apple, Comcast, and Netflix (among others) are really good at pulling a “sleight of hand” similar to a shell game.

We highlighted Apple playing this shell game back in June, inflating share prices solely on news they would buy back shares.

But in this case, the debt of big companies with better credit positions gets misallocated and shuffled to the wrong place. According to The Week, instead of investment and expansion, the debt-funded money goes to payout binges:

In other words, corporations aren’t just depressing wages and investment in order to send more cash to shareholders. They’re literally borrowing more, and making their collective financial positions even riskier, to further feed the payout binge.

As these debts get larger, and payment binges make things riskier, the ensuing corporate defaults could set the stage for an even nastier recession than 2008-09.

Add that to the short-term thinking that pervades the money-hoarding by big companies and it shifts money to the top, but does nothing for the U.S. economy.

You can see some of this short-term thinking in the chart below. The black line shows shareholder payout dollars as an increasing percentage of total sales: 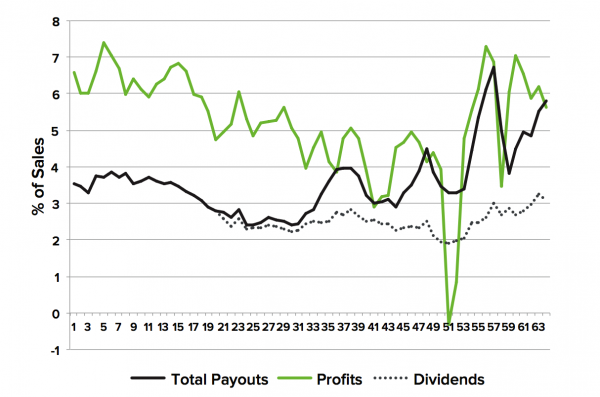 But these increasing payouts only stand to fuel the illusion that the party will never end. All signs are pointing to the opposite however.

Even the IMF is taking notice, with one economist highlighting the “excessive optimism” that fueled this debt craze:

When the economy is doing well and everybody seems to be making money, some investors assume that the good times will never end. They take on more risk than they can reasonably expect to handle.

All it’s going to take is inflation to rise out of control and reduce the ability for these corporations to pay back debt. And there is a lot more of it to be paid back this time.

Plus, as we’ve just reported, the Fed doesn’t seem interested in slowing inflation down (or revealing the real rate).

It looks as though the market is propped up by companies that are in massive amounts of debt. The few remaining bigger companies are hoarding cash to stay afloat.

The U.S. economy is rapidly approaching a “debt iceberg” it may not steer away from. Once it hits, it’ll sink fast, just like the Titanic.

Don’t Let Your Portfolio Get Sunk by Corporate Debt

The U.S. has a long enough history to show that market optimism is pushed until it’s too late.

If you want to hedge against the “sinking ship” that seems imminent, the time is now. Don’t let overly optimistic investors make you join them as the last ones off the boat.