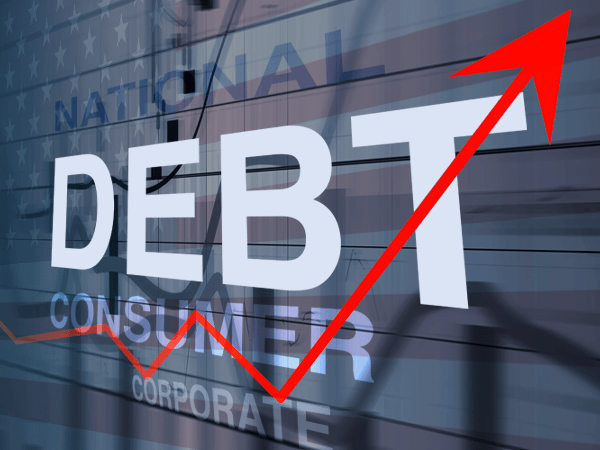 The “trifecta” of national, corporate, and consumer debt has reached all-time highs, and could prove to be catastrophic if a recession hits.

The national debt, ever on the rise, currently sits at around $22 trillion:

In just the short decade since 2008, the debt has jumped from $10.6 trillion to $22 trillion. It also comes with a deficit that’s currently over $1 trillion currently. The interest payments alone may be forming a “black hole” from which the U.S. may never escape.

These facts alone should raise concern in any interested observer.

The total amount of corporate debt has never stopped rising since 1950. Corporations have taken on a record level of debt since 2007.

You can see the steady rise in corporate debt liabilities here:

One of the main problems with this type of debt, aside from getting repaid, is that some corporations are using it to buy back shares of stock. Instead of this “sleight of hand,” you’d think that they should be using it to fund growth and create jobs.

But one thing is certain, the piper will need to be paid at some point. When that happens, who knows what can happen to the economy.

Total consumer debt is near $4 trillion, and has been rising steadily since 1975. But it has risen a staggering 47% since 2008, and shows no signs of stopping.

The chart below reveals this economic “ATM” at work:

When interest rates rise, as they have been thanks to the Fed’s recent spat of rate hikes, they will eventually get high enough that consumers won’t be able to get loans, or repay them.

Economic growth requires that consumers buy things and obtain credit. If they can’t do either, the consequences could be dire.

Now, this debt-fueled trifecta has caused panic among some billionaires.

Mainstream media almost never hype a financial crisis, so it’s significant when they do. But when billionaires are sounding the alarm, you might want to pay close attention.

At least two billionaires are doing just that, starting with Baupost Group’s Seth Klarman. Baupost Group is a $28 billion hedge fund, and Klarman normally positions himself out of the limelight. His fund is only open to private investors, so he has little incentive to promote his brand to the public.

But recently, he felt the need to write a warning to investors about the global debt, with specific reference to the U.S., according to Sovereign Man:

In a 22-page letter to his investors, Klarman warned that government debt levels, particularly in the US (where debt exceeds GDP), could lead to the next global financial crisis.

“The seeds of the next major financial crisis (or the one after that) may well be found in today’s sovereign debt levels,” he wrote.

In the same letter, Klarman continued…

“There is no way to know how much debt is too much, but America will inevitably reach an inflection point whereupon a suddenly more skeptical debt market will refuse to continue to lend to us at rates we can afford…”

Since the U.S. spends almost a third of its revenue on interest payments alone, it doesn’t seem like it can afford to pay much more.

And Klarman isn’t the only billionaire expressing unease. At the World Economic Forum in Davos, Switzerland, Ray Dalio, founder of the world’s largest hedge fund, said that debt would be to blame for the next downturn, which he believes will be bigger than the Great Depression.

“The biggest issue is that there is only so much one can squeeze out of a debt cycle and most countries are approaching those limits”.

You might think the U.S. government would do everything to curb this problem. But according to the Congressional Budget Office, the debt is projected to skyrocket to $33 trillion by 2029 (emphasis ours):

Uncle Sam’s total debt is rapidly approaching $22 trillion, and according to the Congressional Budget Offices latest ten-year projection, it will be more than $33 trillion by 2029, with $1 trillion annual deficits set to begin again and stay above that for as far as the fiscal eye can see.

Skyrocketing debt, check. Deficit to match, check. Or will it be checkmate?

Time to Prepare Your “Exit Plan”

The debt-fueled “growth” the U.S. has seen in recent years seems to be facing its biggest test.

That’s precisely why now is an ideal time to consider fortifying your savings. The U.S. has a long enough history to show that market optimism is pushed until it’s too late. If you want to hedge against that, don’t wait to start preparing your exit plan.