Home » Blog » Did the Fed Just Lose Control of Its Main Tool?

Did the Fed Just Lose Control of Its Main Tool? 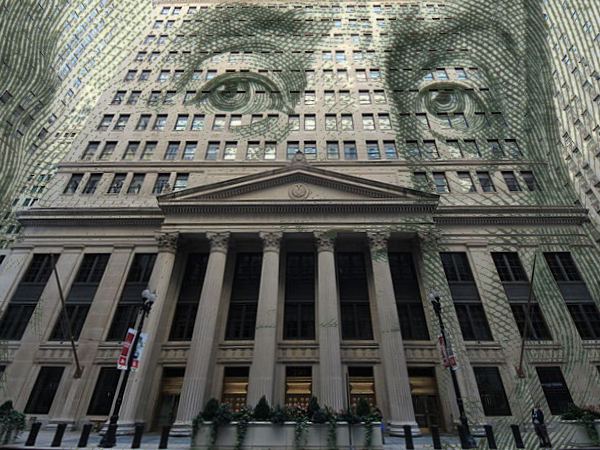 Photo by Wikimedia.com | CC BY | Photoshopped

It started back in September, when a seemingly “shocked” Fed clamored to regain control as repo rates suddenly skyrocketed.

Then, in October, Federal Reserve Chairman Powell decided to start growing the Fed’s balance sheet “as necessary” with “organic” quantitative easing (QE) in order to try to maintain order in the markets.

Finally, the “confused” Fed cut rates yet again, while Powell “assessed the appropriate path” for the Federal funds rate in the future.

This smorgasbord of activity has resulted in three rate cuts since June, plus the activation of the Fed’s “money printing press” (aka, QE) in September.

Which leads us to today. According to ZeroHedge, “The Fed is now injecting $60 billion per month in liquidity via monetization of T-Bills, a process that has promptly sent the Fed’s balance sheet back over $4 trillion, an increase of $280 billion in 7 weeks.”

You can see the official balance sheet total represented in the graph below:

This concerning development begs the question that has never been satisfactorily answered: How did the Fed’s panic to implement quantitative easing start — and now that it has resumed, will it ever END?

The same ZeroHedge article provides at least one possible answer to the first question:

Starting in late March, something unexpected happened: as the Effective Fed Funds rate drifted higher, it broke above the implicit upper bound on the interest rate corridor defined by the Interest on Excess Reserves. It was not meant to do this.

In the chart below, the arrow on the left points to the moment in March when the Federal funds rate (red line) broke the upper bound (blue line). 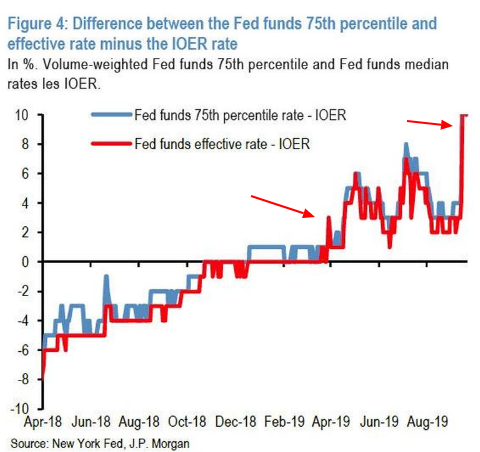 The red arrow on the right points to the start of “the September to remember” for Powell, when the repo funds rate jumped to 10% before the Fed scrambled to regain control.

And now the confused Fed may be scrambling again. Thanks to their recent cash infusion, the main Federal funds rate may be heading too far in the other direction.

The Federal Reserve May Have Lost Control of Its Main Tool

One of the Fed’s primary objectives is to keep the official rate of inflation close to 2 percent. Currently, Powell thinks the fund rate has to be kept within a range of 1.5% to 1.75% to achieve this objective.

But right now, the official rate sits at 1.55%, which is only 5 basis points more than the lower boundary. So the Fed rate has swung wildly from breaking the upper boundary to nearly busting through the lower one.

This signals that the Fed has possibly moved the market from too little liquidity to too much. It also signals they may be losing control of interest rates, which is their primary tool for policy decisions. According to Alexandra Harris:

When that rate strays, it tends to signal that the Fed doesn’t have strong control over its main tool for implementing monetary policy, a worrisome prospect for central bankers.

It shouldn’t just worry central bankers, though. If the Fed is so “confused” it can’t get its own rates under control, how can you put trust into what they say next?

Make Your Retirement Stand If the Dominoes Start Falling

Who knows what the Fed will do next? Until they figure it out (if they ever do), you need to prepare yourself in case their wild interventions start tipping economic dominoes.

One thing you can start doing is make your portfolio more resilient if the market goes sideways. Consider adding precious metals like gold and silver to your asset mix as one way to protect yourself against the Fed’s next “solution.”