A series of recent economic indicators have not only disappointed the stock market, but have spurred higher prices for gold. 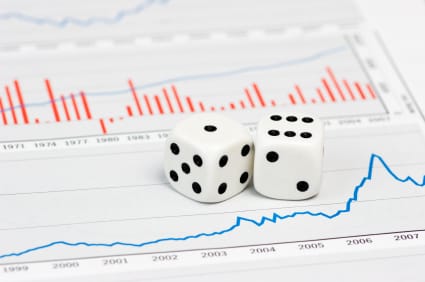 Your News to Know once again brings you the latest critical reads regarding gold and other precious metals. Stories this week include: Recent economic weakness has caused gold to outperform stocks, gold prices reach a six-week high, and a new report predicts that gold prices will move higher in the coming year.

Latest reports of economic weakness cause gold to outperform stocks

The past three weeks have been good for gold, reports Dan Weil of Newsmax. Due to economic struggles, gold has enjoyed a 6.3% percent increase over this period and outperformed the S&P 500.

Several unfavorable economic factors in the U.S. have directly led to gold’s recent performance. First, non-farm payrolls had the smallest increase since December 2013. Second, consumer spending is down 0.1% since January. And finally, the Atlanta Federal Reserve’s GDPNow model is forecasting tiny growth, at a mere 0.1% on Thursday.

Each of these factors have placed stocks in a bad spot, and gold in a good one. Furthermore, the less-than-ideal state of the economy might delay the Fed’s expected boost in interest rates by several months, which would further benefit gold prices. In a CNBC report on gold, RBC precious metals analyst George Gero was quoted as saying that “now, with so many bears in the woods, the fact that the Fed seems to be kicking the can down to the road to maybe September instead of June is helping gold tremendously.”

Notable investor Jim Rogers also dished out on why he believes the U.S. economy creates a good environment to own gold: “The United States is the largest debtor nation in the history of the world. No debtor nation has ever gotten like this, and the debts are going higher and higher. That is a reason to own gold and silver.”

The price of gold reaches a six-week high, continues climbing

The lack of jobs and stunted economic growth saw gold rise to its highest point in over six weeks, writes Michael Newberg on CNBC. However, Dennis Gartman of “The Gartman Letter” believes that the rise is only beginning.

Recently on CNBC’s Fast Money, Gartman was one of several traders to voice their opinion, and his outlook on gold was clearly positive. His predictions weren’t based on economic issues in 2015 but rather on gold as a commodity.

“Clearly gold will do better if the dollar were to get a bit weaker in general terms, but I much prefer being long of gold in non-U.S. dollar terms,” Gartman insisted, arguing that gold has been in a bull market for almost two years in all terms aside from when measured in U.S. dollars.

Gartman also pointed to recent weaknesses with financial markets as evidence of the bright future that the precious metal will have. “I think gold has turned for the better,” he said. “It is fascinating to me that gold has done better in the course of the past several weeks. Even as the crude oil market was coming under pressure, gold was doing better. Even as grains were coming under pressure, gold was doing better.”

Report: Gold has reached a bottom, will climb in the next few years

Precious metals consultancy Metals Focus recently published a report, titled Gold Focus 2015, in which they outline why gold is slated for a rise. The company forecasts this year as being the end of gold’s recent downturn, with 2016 being when prices could begin to accelerate upwards.

After reaching an expected low this year, Metals Focus predicts that gold will close 2015 at an average of $1,190 an ounce and continue going up from there. The main reason for gold’s recent perceived weakness was the expected upcoming interest rates rise by the Federal Reserve.

The report notes that the downturn for gold should end shortly after the rate increase, as it is expected to be moderate and leave real interest rates negative for a while. Reduced gold selling from Western investors, mine supplies’ retreat from record heights and an improvement in Asian gold sales prospects should also play a part in providing stability for the gold market towards the end of 2015.

The Gold Focus report also sees next year as when we may see yet another bull market for gold. According to the report, “From 2016 onwards, there are several plausible candidates waiting in the wings to provide the spark for a renewed gold bull market.” The candidates listed include “potentially gold-friendly developments in debt, inflation, foreign exchange, commodity and equity markets and the scope for a far more malign environment for international relations to develop over the next few years.”