Home » Blog » Huge Economic “Blind Spot” that May Damage the Dollar and Crash the U.S. Economy

Huge Economic “Blind Spot” that May Damage the Dollar and Crash the U.S. Economy 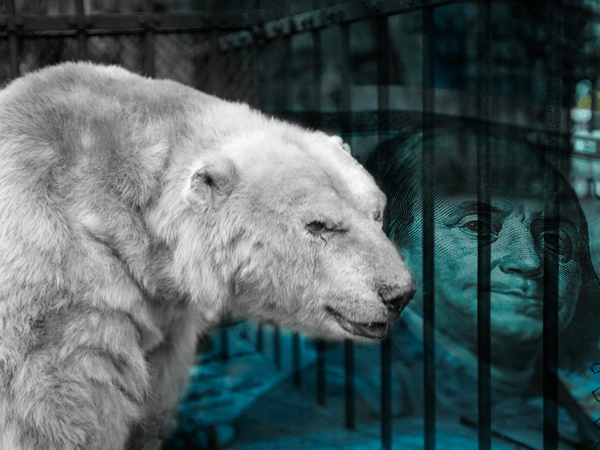 When you poke a bear through a cage, eventually that bear becomes enraged enough that it will want to reach through the bars and take a swipe at you.

The U.S. has been poking a global trade “bear” through the economic cage by placing various sanctions on trade since 1951. The U.S. uses this tactic to keep the dollar as the central currency on the world stage.

But it seems the U.S. has poked the “bear” enough, as China, Russia, Iran and Turkey are now coming out swinging. The effect on the U.S. dollar could be damaging, to say the least. It’s likely that this is what these countries want: to damage the dollar and replace it.

They’ve been preparing for this moment for quite some time, too. From a 2016 report by Jim Rickards, who works closely with Washington think tanks:

Since the end of WWII the U.S. has monopolized the global reserves and global payments with the dollar. Other countries have bond markets that aren’t as mature, and rule of law doesn’t allow them to create alternative currencies on par with the dollar.

The U.S. trade sanctions maintain this control over other currencies. So Russia, China, Turkey, and Iran have only a couple of alternatives in order to push back…

From the same report by Jim Rickards:

Gold offers adversaries significant benefits in a world of U.S. imposed dollar-based sanctions. Gold is physical, not digital, so it cannot be hacked or frozen. Gold is easy to transport by air to settle balance of payments or other transactions between nations. Gold flows cannot be interdicted at SWIFT or FedWire. Gold is fungible and non-traceable (it is an element, atomic number 79), so its provenance cannot be ascertained.

Plus, since 2013 the “bear” being poked by the U.S. has been slowly dumping U.S. Treasuries (debt). Normally, that wouldn’t pose too much of a threat.

But in this case the “bear” owns quite a bit of debt (see chart below). 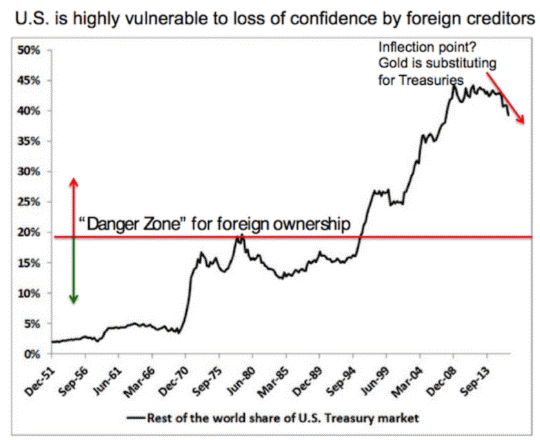 These countries won’t dump this debt too fast, as they would risk market panic, making their own positions suffer.

The U.S. knows this buys them time, and the dominance of the dollar up to this point has allowed them to continue endless cycles of buying and selling debt with interest.

But doing that comes with a price, and eventually the piper has to be paid. The way things have gone recently with QE, this is developing into an economic blind spot.

Objects in the Economic Mirror are Closer than They Appear

Since 1951 the U.S. dollar has enjoyed a period of stability as the central currency in global trade.

But recently, this stability has been threatened because of trade tensions and failure from the U.S. to control its debt.

And now, the countries that have been pushed around have gotten closer to amassing enough gold to increase the threat to the dollar.

With enough gold to conduct business without reliance on the dollar, the value of the dollar in those transactions gets diluted and loses significance on the trade sanctions the U.S. uses to gain leverage.

From a recent report on The Daily Reckoning we see these countries are gaining ground fast:

And according to that same report, the U.S. remains unprepared for this economic blind spot. Recent oil trade sanctions on Iran by the Administration might be the last straw, making this where the blind spot could be exploited.

China and Turkey are top buyers of exported oil from Iran, and if U.S. sanctions restrict those transactions from taking place in dollars, then these countries will have no choice but to use other ways to keep the oil (and money) flowing.

In the past the U.S. was able to stay afloat by leveraging the dollar in this way. But now, these countries may have amassed enough gold to cut the dollar out of the deal.

A rapid decline in mining output, plus this accumulation of gold by these countries could help to send gold prices up dramatically.

Couple this blind spot and the new trade friction from “America First” policies, and you have the recipe for a dramatically declining dollar.

Don’t Let Your Own Portfolio Develop a “Blind Spot”

According to some experts, we’re hitting “peak gold”. While we technically won’t run out of gold, the “minable” gold will be in short supply. That will drive prices up.

And during times of uncertainty and risk for the dollar, gold is one way to help stabilize your own portfolio. MarketSlant put it best with their 9th reason to put some funds into gold (emphasis ours):

Bullion is seen as a safe-haven during times of political instability. Just as investors flock to bullion during financial instability, many also do so in times of rising world tensions and geopolitical turmoil. For this reason gold is sometimes called the “crisis commodity” and its price often appreciates the most when confidence in governments is low.

If the dollar loses its dominance as the global reserve currency, big economic changes will be on the way. With this economic blind spot fully developed and in place, who knows how it will turn out?

Think ahead so you don’t fall behind. Sooner, rather than later, is the best time to protect your wealth.