Home » Blog » Eight Stock Markets Down For Decades – U.S. an Outlier (For Now) 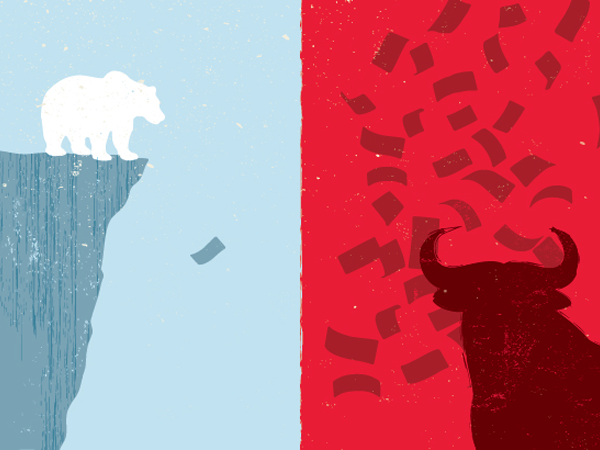 In the U.S., die-hard market optimists hang their hats on this idea.

But a piece on the WolfStreet website reveals that the U.S. could be an “outlier” market running on fumes – an enormous bubble poised to explode at any time.

In that article, Wolf Richter identified eight global stock markets that peaked decades ago, and are still struggling to recover those prior highs:

According to Wolf: “Buy-and-hold has been costly for these investors – unless they got the market timing right, buying low and selling high, but that’s trading not buy-and-hold. Traders that didn’t get the timing right got run over by an endless freight train.”

Each of these markets, even though they are smaller than the U.S., are (decades later) still trying to recover from their own market “bubble” popping.

If the same thing were to happen in the U.S., the implications would be much more devastating. It’s also quite possible the recovery time would also be much longer.

Richter finished his article by stating, “This is the most treacherous investment environment I’ve ever seen.”

He could be right.

So Where Does that Leave the U.S. Stock Market?

The analysis comes from a popular market cap to GDP ratio. The piece explains exactly how the ratio works, and the history of the U.S. stock market’s overall increase since 1980 (even with the 2008 crash).

But that piece finishes by highlighting an important question: What happens once the U.S. stock market finally corrects?

How long will valuations remain this elevated? That’s anyone’s guess. But we do know if valuations remain extremely elevated for an extended period, when the correction finally comes, the market will be more prone to a serious decline.

In March, the market seemed to “semi-correct,” much like it did towards the end of 2018. But that wasn’t enough to remove all of the value in the U.S. market.

So the “serious decline” that the Forbes piece alludes to could be catastrophic if it comes to pass in the near future.

The chart that could help illustrate the “lagging GDP” comes from Money Morning: 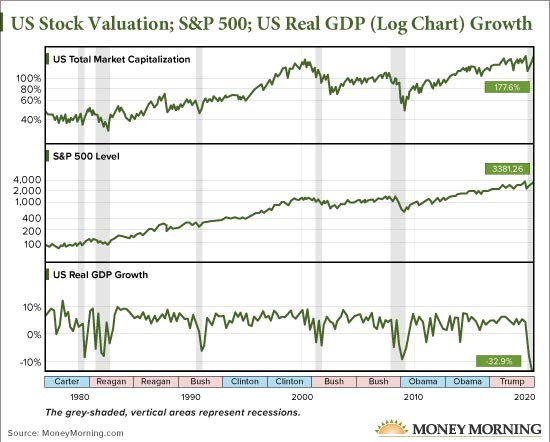 Comparing the performance of the three metrics highlighted in this chart – U.S. stock valuations, the S&P 500, and GDP growth – and focusing specifically on the past few months, you can clearly see how far behind GDP has been lagging. That isn’t a “crash signal” by itself, but it does seem to shine a light on the fact “something has to give.”

According to Money Morning, “No matter which way you slice it, the massive 32.9% drop in GDP (bottom graph) and a rising stock market (middle graph) is going in the wrong direction.”

During an overvalued and uncertain pandemic-influenced market like this, the last thing you need is for things to be “going in the wrong direction”.

Make Sure Your Savings Can Ride Out the Coming Storm

If the Fed’s new “inflation nation” or other factors trigger the wrong events while trying to calm the markets, serious inflation (or stagflation) may happen again. You’ll want to be prepared with assets that can protect your savings.

Holding assets such as physical gold and silver, which generally fare well during market turmoil and times of inflation, could help safeguard your retirement.