Home » Blog » Elon Musk Jokes About Tesla’s Debt – But the Joke Could Be on the U.S.

Elon Musk Jokes About Tesla’s Debt – But the Joke Could Be on the U.S. 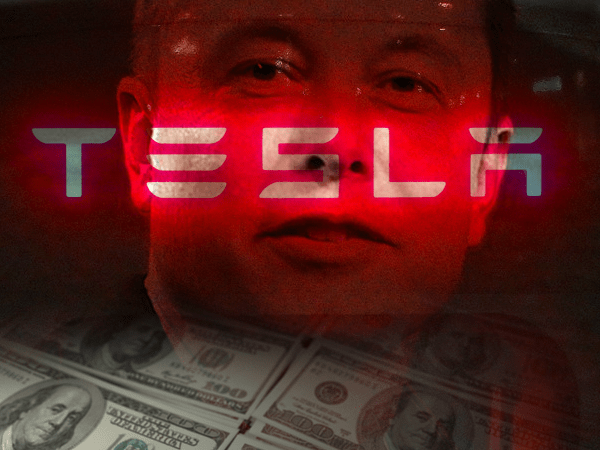 The U.S. Debt is almost a joke at this point, but it’s not a funny one. Especially since there is another lingering debt weighing down the economy…

We’ll get to how corporate and consumer debt is helping to strangle the economy in just a minute (on top of everything else). But first, let’s take a peek at one example of the complacent attitude that currently fuels a big part of the U.S. corporate economy… 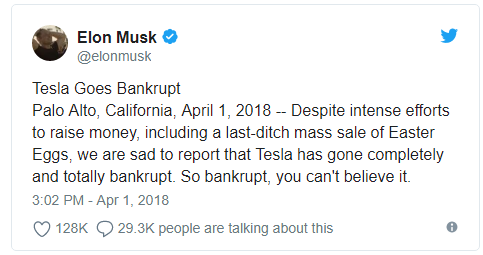 This Tweet was posted on April Fool’s Day, and is a joke. It’s supposed to be funny, except it isn’t. It leans a little too close to reality.

Tesla’s negative net income was even worse. But Elon acts as though everything is A-OK at his company, while sending cars into outer space to the tune of $500 million.

As those interest payments from debt keep eating into revenue, paying that debt back becomes more and more difficult.

Yup, all of those price to earnings ratios are negative. That’s because Tesla is hemorrhaging money. See the chart below… 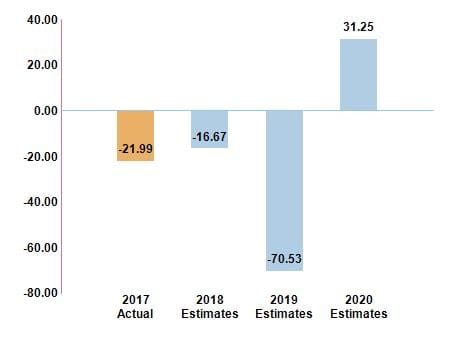 Even though Elon might be confident in their 2020 P/E estimates, Tesla couldn’t possibly keep going at this rate. And experts are starting to agree (emphasis ours)…

Speaking of Tesla, I’m fairly confident that Tesla will be out of business within two years, if not sooner. In the last two weeks the landmines planted in the Company, some hidden and some in plain sight, began detonating. Per the Company’s Q4 results, not including the benefit of tax credits which will run out some time this year, TSLA lost over $28k on each car it sold. The Company is burning cash at a rate that will require a capital-raise of at least $2 billion later this year, something which will be very difficult now that it has a triple-C rating from Moody’s. S&P will likely follow suit at some point.

But Tesla is just one example of the underlying problem brewing in Corporate America. Hype, groupthink, and seriously flawed methodology have infected a good part of the market.

That leads to more poor business decisions, worse economic decisions, and the continuous piling up of consumer and corporate debt…

All Aboard the Debt Train

Some experts will say we are in the longest recovery in the post-war period. Technically, that is true, but it isn’t a strong recovery. And after all, what goes up must come down.

The market cycles, and is due for a correction. This time, when the market corrects, it might not recover at all. Why?

Too much U.S. consumer, and corporate debt.

The U.S. needs to pay the interest on the debt, and is becoming less and less able to. Consumers need to spend, which gets harder as they get buried deeper and deeper into debt.

Total credit card debt has reached its highest point ever, surpassing $1 trillion in 2017, according to a separate report by the Federal Reserve.

Companies need to invest, operate, and build… but are taking on debt at levels not seen since 2009 (the end of the last recession).

The corporate sector has taken on a substantial amount of debt in the current business cycle,” LaVorgna wrote in a note to clients. “Non-financial corporate debt has increased by $2 trillion from its trough in [quarter four] Q4 2010.

And loose monetary policies from the Fed can only prop up the market for so long. The debt these companies take on requires repayment.

Should interest rates rise and economic conditions worsen, corporate America could be facing a major problem as it seeks to manage that debt. Rolling over bonds would become more difficult should inflation gain and rates raise, while a slowing economy would worsen business conditions and make paying off the debt more difficult.

And it looks like we’re beginning to see the increasingly tight stranglehold debt has on larger companies right now.

Sports Authority filed bankruptcy in 2016 and proceeded to shut down all their stores because they couldn’t find a buyer.

Suffering from slumping sales and mountains of debt, Toys ‘R’ Us has filed for bankruptcy.

They are now going out of business, and are closing the doors at the end of April. Billions of dollars of debt will remain unpaid for now.

Not to mention, 30,000 employees, who are also consumers, will soon be without jobs. Plus, 10-15% of toy sales will go POOF! That also means toy manufacturers will suffer, along with employment opportunities within those businesses.

The ripple effects from just one big business failure can send a shockwave through the economy. And more debt will likely pile up as ancillary businesses try to recover.

Finally, Sears might go belly up in 2018 due to closing stores, wary suppliers, bad business moves, and more debt.

And that’s just three notable companies. More companies filed for bankruptcy in 2017 than the previous year, and that number might continue to climb this year.

And just think… if Tesla goes about business the way they do, that could spell the end of SolarCity. Can you imagine the shockwaves that would send across the nation?

For now, debt’s stranglehold on the economy continues. Eventually, the U.S. economy will have to “pay the Piper” and there will be heavy consequences to pay.

That could mean Americans will be forced to “foot the bill” in the form of higher taxes, higher interest rates, and possibly even more bailouts.

What Einstein Said About Solving Problems Was Correct

Einstein once said “no problem can be solved from the same level of consciousness that created it.”

You likely know the often-repeated definition of insanity…

Keep doing the same thing over and over, while expecting different results.

This isn’t rational thinking. But doesn’t it feel like this is what the U.S. economy is doing right now?

As more debt gets added to the economy (and less reasonable solutions are suggested) your wealth becomes more and more at risk of the impending collapse.