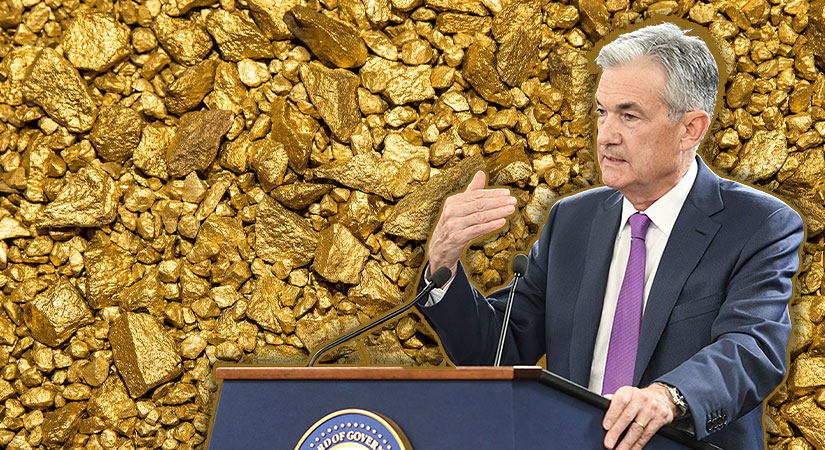 Composite of images from Federalreserve and Miriam Doerr

This week, Your News to Know rounds up the latest top stories involving gold and the overall economy. Stories include: Is gold really underperforming?, more woes from COMEX and Austrian Mint discusses recent supply strains.

Last week’s gold news was, for the most part, how the Federal Reserve didn’t U-turn. It’s sticking to its hawkish monetary-tightening policy with general expectations that it will continue to do so. The subsequent headlines are surprising. For example, one notes that gold is on track for its worst week in a month due to the Fed’s continuing hawkishness.

Let me take a moment and explain why the Fed’s policies are so closely watched by investors, and what they have to do with gold’s price. There are two big factors at play.

First, remember, the Federal Reserve controls the global supply of dollars. When the Fed makes more dollars (we call this inflation), the price of intrinsically-valuable commodities like gold, crude oil etc. tends to go up in direct proportion to the increase in dollars. Inflation makes dollar purchasing power decline, so it takes more dollars to buy the same quantity of gold. That’s where gold gets its “hedge against inflation” reputation.

Conversely, when the Fed reduces the global supply of dollars (we call this quantitative tightening, but only because the more proper term, deflation, is terrifying to most economists), commodity prices tend to decline. Fewer dollars means increased dollar purchasing power, so it takes fewer dollars to buy the same quantity of gold.

Secondly, the Fed sets interest rates. For institutional investors who see precious metals as just another asset class, higher interest rates are compelling. Why, they ask, should we invest in an asset that doesn’t pay dividends when we can buy “safe” Treasury bonds instead? So higher interest rates tend to decrease the demand for gold as an investment – which, as you’d expect, can lead to lower gold prices.

Back to our main story…

What do gold’s recent price moves look like? As the more careful observer pointed out, gold actually began a not-so-insignificant bull run in the face of the Fed’s recent declarations. Gold started around $1,620 just a few weeks ago and now is nearing $1,800/oz. Normally, we would expect headlines praising gold’s performance, yet for some reason we’re seeing the opposite…

A rational view of gold’s recent price moves alone tells us that a suddenly-dovish Fed isn’t a requirement for gold’s price to rise. Clearly there are many other factors pushing gold up. Not many market commentators seem willing to concede this. A Kitco analysis does note gold’s resilience amid the hawkish Fed policy, which would suggest investors aren’t convinced our short-term economic prospects look great.

Some analysts believe the primary concern is now a recession, not inflation (I think we should be wary of both). This is supported by a multitude of factors, from a letdown in holiday sales data to manufacturing and service slowdowns. Many wonder how much worse it will get when the Fed plunges the U.S. into a deliberately-engineered recession. As State Street’s George Milling-Stanley notes, gold averages a 20% price surge during recessions. Others believe that gold’s strength is due to interest rate hikes being priced in far ahead of time (which is, generally speaking, true).

As other major central banks raise interest rates of their own, the focus will nonetheless remain on the Fed.. Interest in recessionary prospects in the U.S. hasn’t been this high in a long time. The economy is undoubtedly being squeezed, as is the everyday American family.

Whatever happens in 2023, let me remind you that gold’s underperformance during hiking cycles is an old-wives’ tale. Gold’s price may fluctuate, but its intrinsic value remains the same, regardless of the currency you use to measure it.

The liquidity squeeze between the paper and physical gold market continues to be one of the most under-reported stories. Due to compliance with the Basel III agreement, we saw more than 30 tons of gold and 80 tons of silver called for physical delivery just last week. (Brief recap: the Basel III agreement changes the way banks are allowed to value their gold reserves – here’s a good summary.)

This analysis suggests that demand for gold and silver from both mines and scrap has exceeded supply for over two years. Contrary to supply-demand dynamics, as is so often the case in the gold market, we may yet see a strong selloff in gold due to paper market manipulation. But the figures are slowly shaping up. Besides the to-watch December 27 expiration of gold options, we also have some new data showing that hedge funds are investing in gold.

The Commitment of Traders report shows that hedge funds, known for their bearishness on gold, went from 43,000 net short positions on September 27 to 23,487 long positions as of December 6. A swap in 66,500 contracts in less than three months indicates hedge funds might see something that the market is overlooking.

Gold faces yet another possible headwind in the form of short-term profit seeking by traders from an oversold dollar. The forecast for gold appears to be decidedly uneventful for the remaining two weeks in the year and then highly eventful from the start of 2023. It’s the start of the year that will unravel many key stories playing out in the gold market. These include COMEX and other liquidity squeezes, their impact on retail bullion, the desire by various countries and even regions to de-dollarize with gold and more.

As it stands, recent gold prices are giving buyers a chance to load up on bullion before a significant move. (Though as various mints around the world will tell you, the window appears to be growing smaller.)

We’ve spent a lot of time reporting on U.S. Mint’s trials and tribulations over the last two years – their ongoing inability to keep popular items in stock, their flubbed product launches and complaints of inadequate supplies (especially for silver blanks).

Despite being one of the oldest and most regarded mints, the Austrian Mint doesn’t get as much attention here in the U.S. as it does in Europe and Asia. In the domestic precious metals market, there’s a greater demand for American eagles or Canadian maple leaf coins than Austrian Philharmonics.

So how is business these days? Quite strained, as Mint’s Chief Executive Gerhard Starsich told Reuters:

Demand for gold has never been as high as this year… At the moment, every gold coin that comes off the coining press has already been sold. Right now we could sell three times as many as we are able to produce.

In fact, Starisch said demand was higher than at any time since 1989 – the first year the gold Philharmonic was minted.

The Austrian Mint, along with U.S. Mint, the Royal Canadian Mint (RCM), Britain’s Royal Mint, the Perth Mint and arguably the South African Mint are the top sovereign mints producing gold and silver coins. Of these six, one third have publicly announced they’re unable to meet demand. Whether the remaining four are experiencing supply strains we simply can’t know unless they tell us. We do know the Perth Mint’s record sales this year could easily lead to supply crunches.

A word about these sovereign mints: refiner/mints like RCM, Perth Mint and South African Mint are generally more resistant to supply interruptions. The reason is pretty straight-forward: they are their own suppliers. Crucially, U.S. Mint, Austrian Mint and Royal Mint all rely on external vendors to provide the blanks or planchets needed to strike gold and silver coins. (In fact, U.S. Mint has purchased planchets from Perth Mint…) So when Perth Mint has a record-sales year, they’re obviously going to be less able to provide raw materials for the world’s mints who don’t have their own refining options.

So who’s buying gold? In Austria, just about everybody…

“The mint’s shop has had a long line outside every day for months,” Reuters tells us, before interviewing one of the patient Austrian customers, who explained her reasons for buying gold:

You don’t have to be a prophet or anything, prices just go up. And of course you want to have safe things, because the stock market is not 100% secure either. Gold is a certainty in the back of your mind, a safety measure or a safety factor, I would say.

By the end of November, Austrian Mint had sold 1.8 ounces of gold, just behind their record of 2 million ounces sold in 2009. Remember, in 2009, a global financial crisis was well underway. Today, we’re approaching that record level of demand without any particular crisis in the headlines.

“The best time to buy gold is before a crisis.”

There’s no reason for Birch Gold customers to wait in line, though, because we do have a supply of Austrian Philharmonic gold and silver coins – for the time being, at least.