Home » Blog » Fed Hawkish In Spite of “Low Inflation” – What Aren’t They Telling Us?

Fed Hawkish In Spite of “Low Inflation” – What Aren’t They Telling Us? 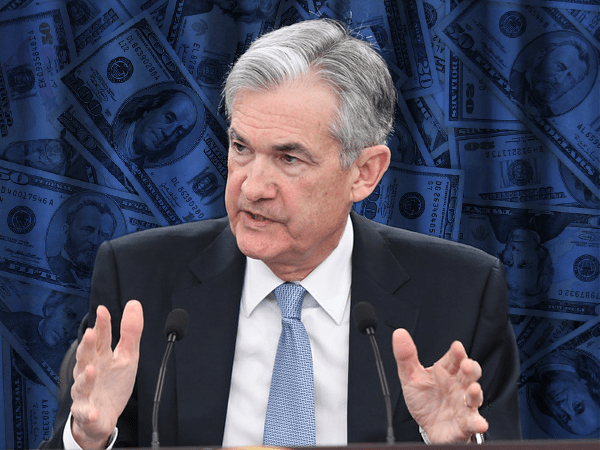 In another episode of “Trust us, move along, nothing to see here”, the Fed raised short-term rates another quarter-point Wednesday to 2%.

Rising short-term rates can indicate the economy is returning to a stronger state because the credit market doesn’t need to be “stimulated” as much by low interest rates.

And generally, rising rates also coincide with rising inflation. But just how much inflation is the question, and Fed Chair Jerome Powell appears to be cheerleading and possibly even omitting something in the minutes of the recent FOMC meeting.

Powell stated that, starting in January, all eight FOMC meetings would be “live”; that is, they would each be followed by a press conference. He was also quick to state this measure was to improve communication, and wasn’t a signal for a rate hike.

But as a blog post by the CATO Institute indicated, this doesn’t “ring true” (emphasis ours):

Currently, the Fed Chair takes questions from the press only once per quarter, or after every other meeting. Powell was quick to add that this change offered “no signal [for] policy rates,” and that it was being made only to improve communications. However, those comments do not ring true.

Since first lifting rates off their zero lower bound in December 2015, the FOMC has only raised rates during meetings that were followed by a press conference, also known as “live” meetings; and it’s now generally assumed that the FOMC will only adjust policy rates at a live meeting.

So will short-term rates be rising much faster and more frequently than anticipated? Perhaps because the “real” inflation rate is much higher?

Only time will tell us the real answer, but for now let’s take a closer look at the FOMC results…

Fed: “Pay No Attention to Those Gradually Rising Rates”

When the Fed raised rates to 2%, it also indicated there would be two more rate hikes this year. If they both take place, that would be 4 total rate hikes in 2018 alone.

At the March meeting, that fourth rate hike was only a distant possibility. Now, it looks like a done deal.

Couple this with Powell’s latest change of having a press conference to follow every FOMC meeting, for “better communication.”

Going forward we should prepare to see the “unexpected”, as Wolf Richter put it in a recent report (emphasis ours):

By this logic, the maximum number of rate hikes the market expects is four per year. By adding press conferences to all meetings, and thus doing away with this four-rate-hike-per-year limitation, the market will have to start expecting the unexpected – that seems to be the message.

The “unexpected” could mean up to eight rate hikes in 2019, although that many are unlikely to happen.

But, the potential total rate increase could be concerning (see “dot plot”): 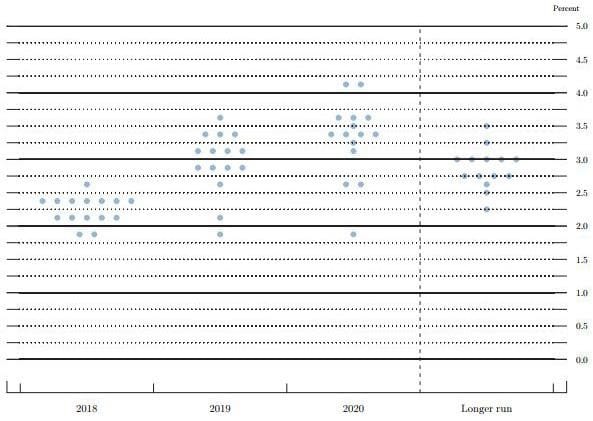 And keep in mind, these increases have been happening since December 2015, when rates broke away from near-zero.

This gradual and hawkish increasing of rates is interesting. It might even work if the rest of the economy were to follow suit. In fact, the Fed reports rising economic growth.

But the reality is that the economy isn’t following suit.

If rates keep going up like this, the auto, home, and consumer credit markets will take a big hit. Plus it’s practically guaranteed to trigger economic slowdown.

And with hawkishly rising rates over a long period of time comes suspicion that inflation may not be “under control”, like the Fed alludes to.

Along with the “gradual” rise in short-term rates reported by Powell is the reported gradual rise of inflation since 2015 (U.S. Bureau of Labor and Statistics):

On the left side of this chart you can see 2008, and the almost 6% inflation rate the U.S. hit shortly after the “Great Recession.”

By the looks of it, using only the reported data, we are on a steady climb towards that same mark. Right now, we are already at a 6-year high according to the standard CPI (Consumer Price Index).

But that is what “they” are telling us, and as we’ve reported before, by using a different methodology the real inflation rate may be much higher – even as high as 6%.

It’s called “shadow inflation.” And if real inflation is that high, maybe the Fed doesn’t have the solution to the problems stemming from the Great Recession of 2008.

And if the Fed is in complete denial, it’s even possible to see inflation go out of control (especially in housing). Add in real unemployment, slowing economy, etc.

More 1970’s stagflation anyone? It could be possible.

So Don’t Let Rates and Inflation Deflate Your Portfolio

Gold is long overdue for a breakout, and you want to be in front of it. Think about hedging your bets now, because what Government isn’t telling us might hurt even more than what they are.