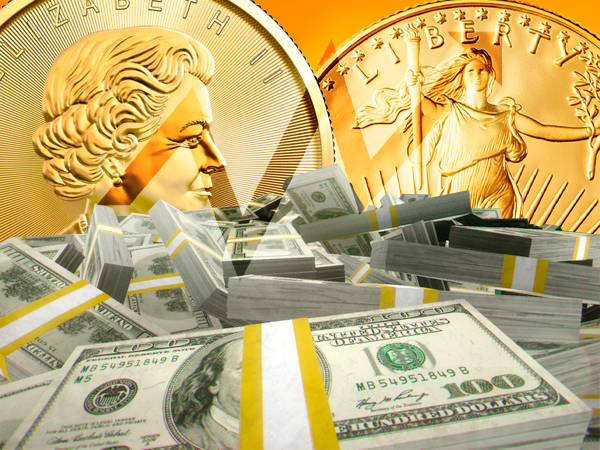 This week, Your News to Know rounds up the latest top stories involving gold and the overall economy. Stories include: Gold is a critical response to the economic crisis, gold jumps to seven-year high as Fed doubles down on stimulus programs, and gold prices could be going for a record.

As the Fed responds to the crisis with inflation, investors should return with gold

Having already printed $1.4 trillion of its planned stimulus package, Forbes contributor Bob Haber believes that the Federal Reserve is on its way to elevating the dizzying $23 trillion of national debt to $30 trillion by the end of 2020. Paired with the likelihood of the $1 trillion of federal deficit expanding further, Haber thinks the Fed has only one choice moving forward: embrace inflation in order to make $1 trillion look closer to $100 billion.

Dire examples like Venezuela and the Weimar Republic have shown that hyperinflation treads a predictable path, and the mere prospect of Modern Monetary Theory (MMT), a concept that calls for the removal of limitations on money printing, had economists frowning. Yet there is little point in lamenting over ultra-loose monetary policies, as they are slated to become the norm in the wake of the coronavirus crisis.

Instead, Haber invites readers to crunch the numbers and respond to the coming wave of inflation in a timely fashion. As the latest data from Bloomberg shows, many have already done so. Gold holdings in large funds have now climbed to 91.2 million ounces, far above the 82.5 million ounces held by the same funds when gold prices were peaking around $1,900 in 2012.

With commercial investors going uniformly long gold and miners cautioning that the metal’s production has peaked, Haber thinks the path is set for gold to pass its all-time highs in the near future. More interestingly, the metal is plenty capable of continuing to climb past that if the Fed keeps artificially stimulating the economy.

Last week, gold surged to $1,685 for the first time in more than seven years as the Fed seemingly greenlit every request for economic aid. The climb to the highest level since late 2012 was fueled by investor concerns over further economic slowdown, coupled with sinking U.S. Treasury yields and expectations of more monetary policy easing.

According to Suki Cooper, a precious metals analyst at Standard Chartered Plc, similar action can be expected moving forward as Americans keep looking for a reliable haven. “Unprecedented monetary and fiscal stimulus, negative yielding debt and low interest rates for longer imply gold will continue to attract a flight to safety and quality,” said Cooper in a note.

Another interesting takeaway has been the sizeable gap between gold’s spot prices and Comex valuations. While the metal itself closed the shortened trading week at $1,685, contracts for June closed markedly higher at $1,752.

This reflects a pervasive fear that the metal’s supply will be hampered by restrictions related to the coronavirus. As it stands, investors are unsure when gold’s supply chains will be restored to their full capacity, as various shipping routes have been closed off. Together with diminished liquidity and an explosion of gold demand, these fears have created considerable premiums in the metal’s physical market.

Gold prices appear to be heading towards a record

Even at its most volatile, gold has been a consistent outperformer since the start of the year. The metal’s lowest price point of $1,454, hit during the massive March selloff, was still hovering around six-year highs. Since then, gold has stabilized firmly above $1,600 and kept climbing to stop just shy of $1,700 last week.

With the gold market no longer being as affected by the rush to liquidity, various experts think that the metal is ready to test both the $1,700 level and its all-time high of $1,911. “Gold usually goes through a shakeout of weak hands before hitting new highs,” noted Jeb Handwerger, editor of Gold Stock Trades. “Gold is breaking out into new all-time highs against most currencies except the U.S. dollar, which is the strongest fiat currency left.”

The metal is currently up more than 15% year-to-date, a stark contrast to the S&P 500’s decline of 14% over the same period. Adam Koos, president of Libertas Wealth Management Group, predicts higher gold prices ahead, stating that a hold above $1,700 will be key in launching gold above its all-time high.

Most agree that the pandemic will continue taking its toll on the economy for some time, and Koos thinks that a prolonged economic stagnation would help gold reach its target much sooner. “If the aftershock of the COVID-19 virus is a much deeper, wider iceberg under the surface of the economy, then I think we could see an acceleration in buying pressure,” he said.

Peter Grosskopf, chief executive of asset management firm Sprott, is even more bullish on gold’s prospects and expects the metal to blaze past the $1,911 high before the end of the year.

“We are close followers of trading and flows in the bullion markets, as well as the underlying technical analysis, most of which point to gold over $2,000 sometime late this year or early next,” said Grosskopf.

“There is too much debt at all levels. We have borrowed from the future, and there is not enough economy to pay it down. That equation requires much more financial repression going forward, and gold is a great hiding place from that process,” he added.