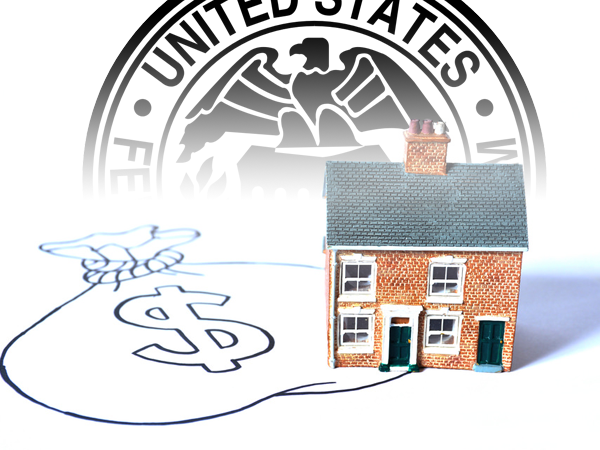 As the “Big Correction” continues, there are going to be a couple of big lessons to learn from when it comes to the U.S. economy…

One of them will be what happens when you use solutions like Quantitative Easing (QE) to prop up an economy with indirectly “printed money” after a recession.

Another will be the major mortgage rate and housing price jumps that have happened recently that will likely cause market distress.

Both will involve ripping off an economic “Band-Aid” while hoping the U.S. economy doesn’t keep “bleeding” afterwards.

The problem is, the impending recession is following a similar script to the 2008 recession.

That includes both a “ready to pop” housing bubble and rising interest rates. Plus, there are also new factors, including the imminent reversal of a temporary solution (QE).

But one key difference between the 2008 recession and the imminent recession is the U.S. won’t have the solutions it previously had, which were used to end the previous recession.

Mortgage Rates On the Way to 6%, Then the Problems Begin

According to the Mortgage Bankers Association, the average mortgage rate for 30-year fixed-rate mortgages is currently sitting at 4.80% (see chart below). 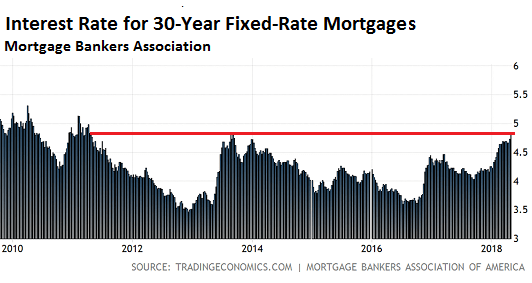 As you can see on the chart above, the average mortgage rate is well on its way to topping the highest rates seen since the last recession.

And they aren’t slowing down. In fact, we are likely to see mortgage rates top 5.5% by year’s end influenced by 3 important factors:

If rates top 5.5%, as the set up looks to support, then mortgage rates will be at their highest levels since 2008. Here’s why this should raise concern…

When rates go down (as they did following the last recession), higher home prices are still within reach for buyers (because the monthly payments will still be low enough). But when rates go up (as is happening now), it squeezes home prices from the top down.

According to Wolf Richter over at Wolf Street, the good times in real estate are ending…

The big difference between 2010 and now, and between 2008 and now, is that home prices have skyrocketed since then in many markets – by over 50% in some markets, such as Denver, Dallas, or the five-county San Francisco Bay Area, for example, according to the Case-Shiller Home Price Index. In other markets, increases have been in the 25% to 40% range. This worked because mortgage rates zigzagged lower over those years, thus keeping mortgage payments on these higher priced homes within reach for enough people. But that ride is ending.

But this time, rising rates are being coupled with record-high home prices that, according to the Case-Shiller Home Price Index, show no signs of reversing (see chart below).

So you have fast-rising mortgage rates and soaring home prices. What else is there?

From Investopedia, the definition of QE (emphasis ours)…

The Fed has been “unwinding” the effects of the most recent round of QE since October 2017, and with that one of two things will happen…

The bet is on the latter with everything else going on and an imminent market correction. And Wolf Richter agrees, commenting on a recent QE discussion…

I don’t think anyone knows. This is all experimental. Something big is going to break somewhere, and it will show that something didn’t work as expected or hoped, and then lessons will have to be learned. I just hope this won’t happen here. I’d rather write about it as observer than be tangled up in it.

Here’s to hoping. But from the same Wolf Street report on the sharp “unwind” of QE (emphasis ours), the Fed has a big job to do…

The Fed is targeting “elevated” asset prices, and sell-offs are part of the deal, as long as panic doesn’t freeze up the credit markets, as it did during the Financial Crisis. But currently, credit market conditions are ultra-loose as a result of years of QE and zero-interest-rate policy. So the QE Unwind has a big job ahead to reverse part of what QE has done, which is what “balance sheet normalization” ultimately means.

In other words, there is a whole lot of uncertainty about where this will lead, and this uncertainty may be followed by panic at some point.

Both are likely, and none of the Fed, the Treasury, or the U.S. Congress have the track record that provide a stable solution beyond unproven ideas and empty promises.

All they have are experimental solutions like QE. And it seems like they are in denial about how it will all turn out.

To Counter Uncertainty, You Have to Add Certainty to Your Portfolio

The upcoming market crash will likely resemble ripping a Band-Aid off and finding out the U.S. economy has not healed. With that in mind, it’s time to focus on healing your own “economy”…

Hedging your bets now, and moving some of your funds into an asset like physical gold would be a wise move towards protecting your retirement against the 10-year “economic experiment” that is about to come to a head.