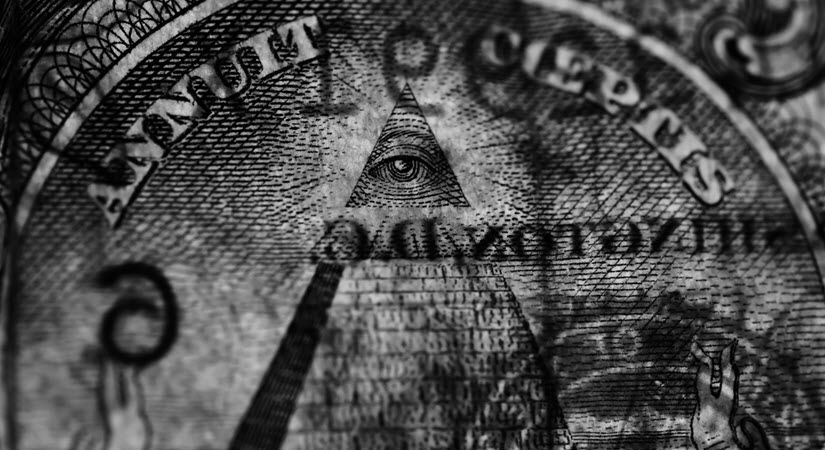 Inflation is now on the cusp of spiraling out of control. We’ve been giving this topic a lot of attention because inflation robs you of your wealth, especially if you’re a normal middle-class retirement saver.

It’s almost entirely the Fed’s fault that both your buying power and wealth have been sapped ever since the Federal Reserve was established on December 23, 1913.

You can see how the dollar’s buying power has evaporated over the last century below: 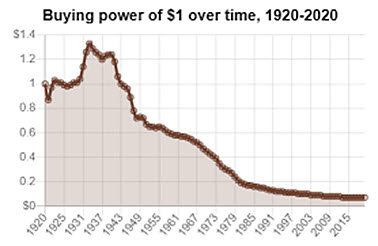 The numbers are more astounding when you look a little deeper. A 1913 family might go to the grocery store and stock up for the week, spending $10 dollars. Fast forward to today? That same cart full of groceries would cost $273.92, or possibly more, depending on what you like to eat. Different foods rose in price at different rates, from “only” 418% for eggs to a mind-blowing 8319% for potatoes.

But that’s ancient history, you’re thinking. Sure it would be nice to go back in time and spend less on groceries, but we make more money now. So what?

The Federal Reserve and the price of food

We talk a lot about the Fed. Here’s what their job is:

The Fed’s record of achieving those goals, though? Spotty at best.

As Brian McGlinchey puts it, “For much of its 108-year history, the Federal Reserve had either an implied or explicit mandate to preserve the value of the U.S. dollar—and it failed spectacularly.”

The phrase “preserve the value of the U.S. dollar” means the opposite of inflation. Preserving the dollar’s value makes foreign imports more affordable to American buyers and encourages other nations around the world to buy and hold dollars in their central banks. Preserving the dollar’s value means you can save money without worrying about its buying power fading into irrelevance.

Instead, today’s Federal Reserve “buys” the debt issued by the federal government to fund its spending by creating new money. These brand-new dollars dilute the value of all other dollars already in circulation, meaning prices go up, meaning inflation.

The Fed’s interventions in efforts to maintain its “strong U.S. economy” mandate are mostly responsible for the incredible loss of buying power, and that’s the force that corrodes your wealth.

The Federal Reserve’s inflation is a tax that no one voted for, and everyone pays.

Before April’s consumer price index (CPI) numbers came in, Fed Chairman Jerome Powell seemed to be turning a blind eye toward inflation. Then gasoline prices increased 49.6%, overall CPI jumped 247% in just 3 months, and food prices are still rising past levels not seen since 2014. Overall we’ve seen at least a year’s worth of inflation in just four months.

The words “failed spectacularly” seems like they only begin to describe the Fed’s recent performance.

And when the agency who’s in charge of how much your money is worth fails spectacularly, there are consequences. Not everyone shares the burden equally…

As you might expect, the less money you have, the worse inflation hurts.

Even though small inflation increases over the course of one year might seem reasonable at first glance. But as The Libertarian Institute’s Brian McGlinchey points out, that isn’t the full extent of the damage:

Just as small plumbing leaks quietly cause devastating damage over time, a steady loss of a modest amount of purchasing power accumulates to a major blow to the dollar. Naturally, the Fed didn’t say it wants to cut the value of a dollar by 26% in 15 years, but that’s how the math plays out. [Emphasis added]

Presumably, an unelected agency with apparently unlimited power to intervene in free markets with the acknowledged goal of reducing the value of your money would be met with torches and pitchforks… So even though that’s not what the Federal Reserve’s mandate says, that’s how the math plays out. If you took your 2021 $1 back to 2006, it would only be worth 75 cents.

See? You don’t have to go back over a century to see real, lasting, permanent damage to your wealth.

And here’s the kicker…

While most Americans saw their wealth stealthily embezzled by the Fed’s “plumbing leaks,” the top 10% of earners, well, they made out just fine (see chart): 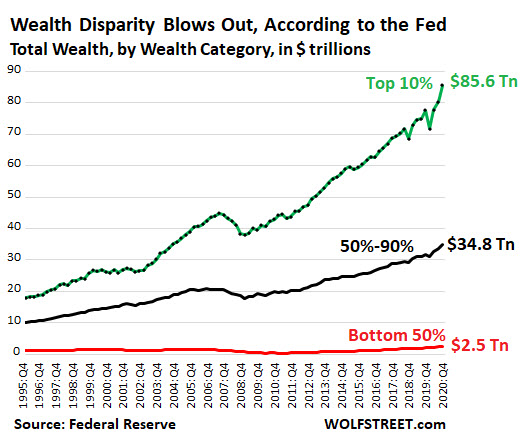 Anyone with two eyes can see what likely happened in 2020. In fact, Wolf Richter ranted about it:

Fed Chair Jerome Powell rationalized and defended the Fed’s ultra-radical, previously unthinkably monstrous, and super-fast bailout of asset holders starting a year ago, when within three months the Fed created $3 trillion and purchased assets with them, and created the biggest media hoopla about those purchases and many more trillions in future purchases, in order to inflate asset prices further, and make asset holders immensely rich.

Most of the “asset holders” Wolf identified in his rant are the top 10% on the chart above. So it appears that Powell’s Fed has made sure the “rich boys club” was well taken care of.

(Don’t misunderstand us. If you’re a member of the top 10%, congratulations. We bear you no ill will. We do take exception to the Fed’s method of pillaging everyone’s wealth in pursuit of a “strong American economy.”)

You can also see how the middle 40% didn’t see their wealth grow nearly as much. The bottom 50% barely saw any wealth increase at all. Here’s why: according to research by professor Edward Wolff, the top 10% of Americans own about 84% of the stock market. So when anything influences stock prices (like, say, passing out free chips to an always-on casino), the already-wealthy benefit disproportionately.

If the Federal Reserve’s mandates are supposed to protect all Americans’ wealth by stabilizing prices and rates, the chart proves they’re failing miserably.

Today, the already-wealthy are a lot better off thanks to the Federal Reserve’s market manipulation. There just isn’t much upside for the rest of us.

Meanwhile, inflation eats away at every dollar you’ve saved. Every single day.

Is there anything we can do to preserve our wealth?

There are some things inflation can’t touch

During the same 15-year period that the dollar’s purchasing power evaporated, gold’s price has more than doubled.

Zoom out 100 years, and while the dollar’s worth has all but disappeared, gold has maintained a steady store of value. That same safe, secure, reliable reputation as an internationally-accepted asset has lasted for thousands of years.

Who knows what will happen if the Fed keeps magically making new money? We’re fairly certain it won’t be good for you, your loved ones, or your future.

Now might be a good time to examine your savings, and consider shifting some of your assets into inflation-resistant physical precious metals like gold and silver. They’re one store of wealth that can’t be inflated away.