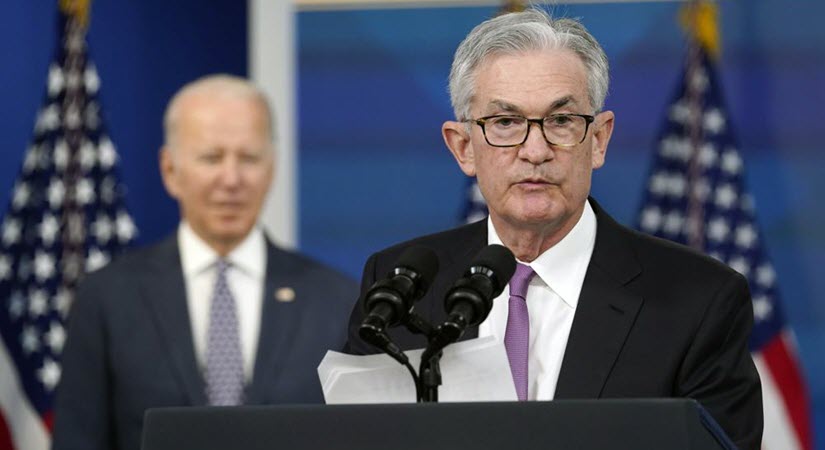 A couple of weeks ago we discussed Wall Street’s hopes the Fed will pivot back to lower interest rates and cheap money to bail out the stock market.

But after Federal Reserve Chairman Jerome Powell’s recent remarks at the annual FOMC meeting in Jackson Hole, Wyoming, those hopes look more like wishful thinking than anything else.

Powell sounds even more serious about hiking the Fed funds rate for as long as it takes to cool off the historic inflation that has been heating up since President Biden took office in January 2021.

Now, that is certainly good news for American families struggling with expenses that just keep increasing month after month. It’s bad news for Wall Street, though, because the Fed needs financial markets to plunge – that’s one big way interest rate hikes affect the overall economy. Like we discussed previously, when Wall Street fights the Fed, it makes the Fed’s job much harder and effectively forces the Fed to use overwhelming force to win the fight.

Today, we’re going to discuss the Fed’s other opponent in the struggle to extinguish surging inflation.

Powell promises economic pain, one way or another

Powell doubled down on the Fed’s commitment to crush inflation. They’ll likely continue raising rates 50-75 basis points after each FOMC meeting for the rest of the year.

The Federal Open Market Committee’s (FOMC) overarching focus right now is to bring inflation back down to our 2% goal. Price stability … serves as the bedrock of our economy. Without price stability, the economy does not work for anyone.

He’s right about this! Lack of price stability is why, as I wrote last year, Saving $1 Million for Retirement is Meaningless. Price stability simply means we have some realistic expectation of how far today’s dollar will go tomorrow. And next year.

Price stability is another way of saying, “stabilize the dollar’s purchasing power,” or of saying “dialing inflation back down.”

Let’s be clear here: this is an outcome everyone can support. Right?

Well, price stability isn’t something that just happens by itself. Powell continued:

Reducing inflation is likely to require a sustained period of below-trend growth … some softening of labor market conditions … [and] some pain to households and businesses.

But a failure to restore price stability would mean far greater pain.

Powell’s policies will bring pain to American families, one way or another.

Now the Fed is openly rooting for stock and housing markets to crash – because that’s how they’ll know their rate hikes are finally deflating the “Everything Bubble.”

Here’s how Neel Kashkari, president of the Federal Reserve Bank of Minneapolis, explained the situation:

I certainly was not excited to see the stock market rallying after our last Federal Open Market Committee meeting. Because I know how committed we all are to getting inflation down. And I somehow think the markets were misunderstanding that.

One of the biggest mistakes they made in the 1970s at the Fed is they thought that inflation was on its way down. The economy was weakening. And then they backed off and then inflation flared back up again before they had finally quashed it. We can’t repeat that mistake.

The good news is, the Fed really does seem determined to fight inflation at all costs. Yes, it won’t be pretty. Stock bulls will cry when valuations return to sane levels. Speculators in the super-hot housing market will likely get burned.

With a big picture perspective, these are the prices we pay to deflate a massive asset bubble. There’s just no way around it.

I’m relieved by the Fed’s willingness to solve the problem they created.

However, it turns out the Fed isn’t just struggling with Wall Street over control of the economy. There’s another major player whose financial strategies are diametrically opposed to the Fed’s goals…

Remember, the Fed only controls half the nation’s power to fight inflation. The Fed’s in charge of monetary policy, or how much money is in circulation, and how much borrowing costs.

The executive branch (Congress and the President) are accountable for the other half of the nation’s economic strategy. The Biden administration is in charge of fiscal policy which includes government spending, taxation, tariffs and so on.

While the Fed’s actively tightening our nation’s money supply, the Biden administration is engaged in the opposite. Through deficit spending, the executive branch prints money to enact their various political goals.

So both the Fed and the White House have a dog in this fight. And these dogs are pretty well matched…

The Federal Reserve Bank of Chicago’s Leonardo Melosi and Johns Hopkins professor Francesco Bianchi just presented a paper measuring the inflationary impact of the $1.9 trillion stimulus spending package of 2021. They conclude a stunning 4% of today’s inflation came from that one, massive stimulus bill.

Generally, Melosi and Bianchi conclude that:

without constraints in fiscal spending, rate hikes will make the cost of debt more expensive and drive inflation expectations higher.

You could read this as the Fed saying, “Hey Biden, stop pouring gas on the fire we’re trying to put out!”

Let’s consider the President’s much bragged about and recently passed “Inflation Reduction Act.” Like most bills proposed to Congress the title might sound good. After all, if the legislation was actually focused on reducing inflation, that would be welcome news to millions of Americans saving for their retirement (and retirees on fixed budgets).

In fact, it’s nothing more than a rebranded spending bill, and according to UPenn’s Wharton School, won’t actually do what its title claims:

The Act would very slightly increase inflation until 2024 and decrease inflation thereafter. These point estimates are statistically indistinguishable from zero, thereby indicating low confidence that the legislation will have any impact on inflation.

And that’s just one piece of legislation! We already have proof Biden knows that more spending creates more inflation. So are we seeing less spending?

Nope. The student loan forgiveness legislation recently passed into law makes matters worse. According to the Committee for a Responsible Federal Budget:

the executive action will cost an “astronomical $400-$600 billion” and has previously estimated that $10,000 in forgiveness would add 0.15% to the personal consumption expenditure price index, a commonly used gauge for inflation.

Let’s be very, very clear: the executive branch has no interest in helping the Fed fight inflation.

Neither does Wall Street.

So the Fed’s left on their own, fighting not just one but two opponents – and the Fed can’t afford to lose this fight. Neither can we.

The Biden administration and Wall Street won’t go down easy – and that virtually guarantees that our economy will see a whole lot of pain while the struggle plays out.

Hunkering down and staying safe while the battle rages

The Fed only has so many tools that could help to extinguish the inflation bonfire. But if the Biden administration keeps throwing spending “fuel” on that fire, that will make it much harder for the Fed. Between Wall Street and the White House, the Fed will very likely be forced to overcorrect, crush the economy, in order to ultimately win the fight.

The Fed can’t win this battle alone! So, until fiscal sanity returns to the White House, the best thing you can do is shore up your retirement plan, and make sure it can outlast the chaos.

You can also take a minute to learn about retirement plans that are known for their security such as diversifying with physical precious metals like gold and silver. When you know your financial future isn’t going to be crushed by inflation, stagflation or the worst economic crisis, you can tune out the economic noise and get back to enjoying the important things in life.