Home » Blog » Gold Will Skyrocket When the Fed Makes This Announcement

Gold Will Skyrocket When the Fed Makes This Announcement

This week, Your News to Know rounds up the latest top stories involving gold and the overall economy. Stories include: All that gold needs is a cowardly Fed, current monetary supply levels suggest gold is undervalued, and what a gold standard would require in modern times.

When the Fed capitulates, gold will skyrocket

The consensus is in: gold can’t shatter its former all-time highs until the Federal Reserve does.

We have as much uncertainty in the global financial markets as gold could need to stage a breakout. Stocks, bonds, housing. Even the U.S. dollar itself (which is the cause of gold’s woes) is flashing warning signals.

The consensus is, a Fed policy shift is needed to let gold rise once again. The debate now shifts to either when or, sometimes if, depending on the analyst.

In a recent interview, five-decade market veteran Alasdair Macleod reveals he’s a member of the when camp. Some analysts expect the Fed to continue hiking rates for an undetermined amount of time – subsequently, Macleod thinks the shift from monetary tightening to a “neutral” monetary policy could catch some by surprise.

Macleod touches upon what is now being called the Credit Suisse crisis, which is rapidly spreading its contagion to all commercial banks. Quantitative tightening, he explains, is essentially undermining the business model of banks. Credit Suisse has served an example of what it looks like when faith in a major bank begins to fail. Liquidity does, too – and since global megabanks are intertwined to an unimaginable degree, when one firm sneezes they all come down with a cold.

When one has a heart attack, without immediate and comprehensive financial life support (multi-billion-dollar bailouts, asset guarantees and the kind of first aid the Fed gave away during the dark days of the Great Financial Crisis), they all die.

Macleod believes a banking crisis isn’t really avoidable. However, the reckoning can be postponed by central banks returning to an inflationary, low-interest-rate easy-money regime. In order to forestall a global banking crisis, Macleod anticipates central banks would much rather pivot to easy money rather than a messy, complicated and precarious attempt to prop up failing banks one by one. Therefore, Macleod forecasts the longed-for Fed pivot as a certainty. As to when, there’s just no way to know.

The senior analyst notes that patient gold investors don’t find themselves in dull times. The recent lack of price movement, he observes, has a lot to do with the abundance of “paper gold” and silver on the market – and tight supplies of physical bullion.

It’s not just banks having liquidity squeezes. Macleod points to a recent and unprecedented physical delivery of upwards of 70 tons of COMEX gold as significant. There are growing concerns about physical gold bullion availability.

We have speculators pushing the gold price downwards on the spot side, yet prices rising on the tangible, physical side. Furthermore, gold and especially silver is becoming increasingly difficult to find. (The U.S. Mint’s repeated sellouts and shortages of silver coins are just one example.)

Gold’s time is coming – and sooner than you think. The wait, which Macleod expects to be necessarily brief, should prove to be an exciting one to anyone who’s taken advantage of the U.S. dollar’s relative strength to load up on gold and silver bullion at what could soon look like discount prices.

The odd tale of the money supply and gold

From the recent Degussa Marktreport, I enjoyed the discussion of the Federal Reserve’s moneyary curiosities, not the least of which are its money supply metrics. Just in case you don’t remember this from your high school econ course, money supply is a measurement of the currency and cash-like assets in the economy.

And there are so many ways to measure this! Here are a few:

M0: strictly currency in circulation and money being kept by banks in reserve

M1: “narrow money,” M0 plus bank account balances not in bank reserves (like your bank accounts) plus traveler’s checks (do people still use those?)

M2: M0 and M1 plus money market fund balances plus “short-term time deposits,” like CDs that mature within a year if under $100,000

M3: all of the above plus “large-denomination time deposits, repurchase agreements (RPs) and Eurodollars [dollar deposits held outside the U.S.]” – which mysteriously stopped being tracked and updated back in 2006, just as it began spiking conspicuously

Why so many? Well, the Richmond Fed has an explanation. Economist Anna Schwartz points out there’s a difference between the kinds of money we use as a medium of exchange (cash) and a store of value (CDs). Or maybe you could choose to believe that taking such a simply concept, “How much money is there?” and answering with at least four different numbers is either a deliberate attempt at obfuscation – or, less ominously, a make-work task for the Fed’s staff of over 400 Ph.D. economists.

So why is Degussa talking about money supply? Ever since M3 stopped being reported, speculation about the true state of the number of dollars in existence has raged.

We were left with with M2, which, Degussa explains, the Fed likewise flagged as misleading early in 2020, just as the monetary supply began ballooning. The Fed replaced M2 it with a modified version in what was a fairly obvious attempt to hide the astonishing, multi-trillion-dollar expansion of dollars in circulation.

It’s interesting that Degussa finds it somewhat plausible that deflation could materialize as monetary supply shrinks. It does tie into Macleod’s view mentioned above, one that paints a picture of liquidity squeezes. Still, deflation is one of those things we’ll believe when we see. It goes without saying that both gold and the monetary supply have a steady upwards chart… or does it? 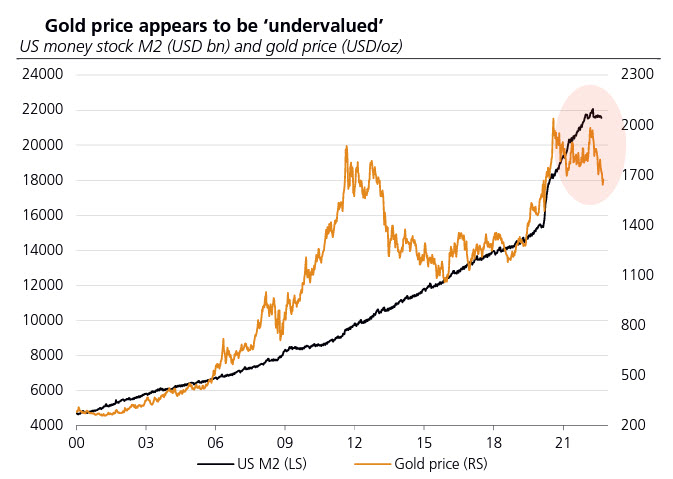 Going back the last two decades, we see that gold has decoupled most significantly from the M2 supply right around the time the previous gauge was discontinued and has been trending below it even during price spikes. That suggests that even during those times, gold can be considered historically undervalued. It was never lagging behind the monetary supply for any prolonged period of time and certainly not in a manner that stands out as much.

Degussa’s analysts are likewise of the opinion that the Fed’s tightening will be a short-lived affair, mentioning the various sectors such as real estate that have already taken massive hits. It remains to be seen if there is any merit to the notion of the Fed trying to somehow introduce deflation as a way to bring back the dollar’s value. As it happens, gold also serves as a deflation hedge. Would we call it a safe haven if it couldn’t perform well regardless of the Fed’s experiment on any given week?

Congressman Alex Mooney’s Gold Standard Restoration Act, introduced on October 7, prompted some to ask: how feasible is it, really? The reintroduction of the tether never lost proponents even among policymakers. The question was always, of course, if there is any sound money left on the table.

Once the U.S. dollar is reanchored in gold, today’s chronic inflation will end; monetary policy–induced boom-and-bust cycles will come to an end; the world will become more peaceful because financing a war in a gold-backed monetary system will be very expensive, and the general public will most likely not want to bear its costs.

Unfortunately, despite being optimistic on the bill’s prospects, economist Thorsten Polleit essentially dismisses it in his analysis by detailing out the effects.

Covering just M1 (defined above), would result in an immediate appreciation of gold’s price to around $8,700 an ounce.

If we decide that everything measured by M2 (again, defined above) would bring about a valuation closer to $83,000 an ounce.

This would cause an immediate and immense appreciation of all things priced in U.S. dollars, make the sovereign debt even more unpayable and hammer exports as U.S. goods became more expensive abroad. Why is Polleit supportive of the bill, then? Likely because he realizes that the ongoing monetary experiment is just that. And that whatever initial damage the gold tether caused, prolonged as it might seem, it would create a point from which to build back… better.

But when we recall that the U.S. dollar was untethered from gold due to an immediate need to fund the war effort, we understand that the government prefers control over sanity in the domain of money.