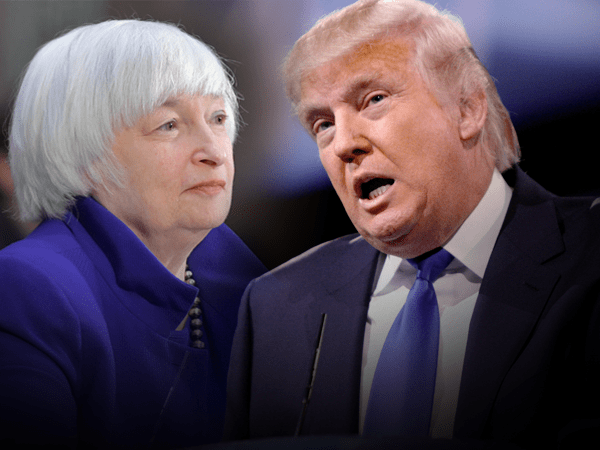 An overhaul of the Federal Reserve’s leadership is coming, and the new appointees could bring a huge shift to the central bank’s policy outlook. How will markets respond?

Let’s examine the Fed’s impending transformation, and what it will mean for Americans’ wallets…

President Trump is getting an exceedingly rare chance to influence the Fed. He’ll be replacing five of the central bank’s seven-member governing board, potentially including Fed chair Janet Yellen.

Woodrow Wilson is the only other president to wield this kind of power, and that happened nearly a century ago.

That means Trump can stack the Fed with leaders that are in lockstep with his administration. And when it comes to policy inclinations, his anticipated appointees are a far cry from who they’ll be replacing.

In a matter of months, the Fed will likely look and behave far differently than it has for the past decade.

A Board of Hawks

Officials earn a “hawkish” label (versus “dovish”) when they tend to favor tighter monetary policy, fewer regulations, and minimal oversight in market activity.

The hawkish tone for Trump’s new Fed is already being set by his first two appointees, which are expected to be confirmed by the Senate soon. Plus, a recent White House leak revealing his top two picks for Fed chair reinforces the expectation that aggressive shifts in policy are ahead.

For example, the Wall Street Journal reports on Trump’s pick for the Fed’s vice chair of supervision, Randy Quarles:

…he has criticized the Fed’s policy of keeping interest rates near zero for years following the financial crisis, and advocated for a monetary-policy rule, or formula, to guide rate decisions.

Quarles will also hold considerable sway over Federal banking regulation, which he reportedly believes should be scaled back.

Then there’s Trump’s pick for Comptroller of the Currency, Joseph Otting. Otting would occupy another key regulatory position, despite criticism of his role as CEO of OneWest bank, which actively contributed to our last collapse by practicing controversial “robo-signing” on foreclosure and mortgage documents while under his supervision.

Two of Trump’s most likely candidates for Fed chair — Kevin Warsh and Jonathan Taylor — further confirm a move toward a hawkish leadership.

The Atlantic reports both potential appointees disapprove of recent central bank policy, and would likely lead the Fed in a vastly different direction (emphasis ours):

Their gripes have included the use of prolonged expansionary policy (which aims to increase money supply and spur economic growth), the increasing regulation of financial sector, and the reliance on the Fed for economic support in the post-recession years.

Trump’s picks—both the ones he’s made and the ones he will make—say a lot about the direction his administration wants to push the Fed in. Those in the running might differ in some of their views, but they all likely will have the same end goals, says Michael Strain, an economist at the American Enterprise Institute, a conservative think tank. Those goals likely include a shift in monetary policy, from infrequent and small interest-rate hikes (in the hopes of triggering lower unemployment and more growth) to more aggressive rate hikes (in the hopes of hitting target inflation and benefiting some investors and lenders). There would also like be a focus on slackening regulation and oversight of the financial sector. Josh Bivens, an economist at the left-leaning Economic Policy Institute, says Americans should be particularly concerned that a remade Fed might do less monitoring of Wall Street. “They’re going to be really hostile to financial-sector regulation,” Bivens says. “I think that’s absolutely going to be a key characteristic of people who are appointed.” Another worry Bivens has is that in the event of another recession, a firmly conservative Fed board may be less willing to employ the quantitative-easing strategies that the Fed did under Yellen.

What to Expect (and How to Prepare)

According to these reports, Trump’s new Fed would depart from recent policies in three key ways…

Essentially, this means the Fed’s economic coddling and heightened role as regulatory watchdog since our last crisis would come to an abrupt end.

But while this change could shake markets and traditional investment vehicles, it could be very good news for “real assets” like physical precious metals.

For example, contrary to popular opinion, rate hikes from the Fed tend to be a positive price driver for gold.

Case in point, gold prices consistently rose after every rate hike in 2004 (a year with historically high frequency in Fed rate increase activity), as the chart below demonstrates: 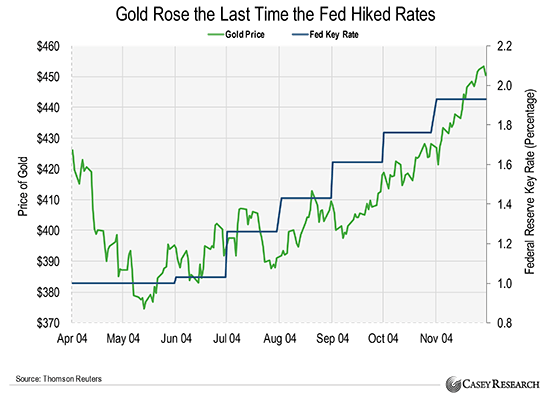 And rate hikes aren’t the only way this new hawkish Fed could help gold.

If the Fed acts too aggressively and pushes our economy into another period of contraction, gold prices are sure to prosper.

Furthermore, if new Fed officials shy away from rescue policies like Quantitative Easing when our next downturn arrives — which is likely based on their propensity for hawkish policy — gold prices will only reap further benefit. Without Fed intervention, the next crisis will likely be more severe, pushing large numbers of new buyers into metals and driving prices upward.