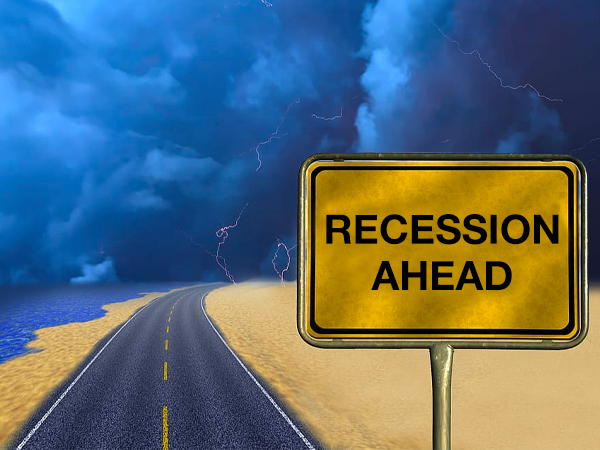 Last September, the Fed’s emergency liquidity operation in the repo markets signaled serious distress in the economy. The topic deserved the attention that we gave it at the time, but looking back on it now, those actions are dwarfed by those that the Fed has taken in recent months.

In March, in order to stave off market panic, Federal Reserve Chair Powell fired most of his economic “bullets”, including initiating a new round of Quantitative Easing.

As a result, the Fed’s balance sheet went vertical, potentially igniting a powder keg of inflation.

And, in just over a year, Powell has done a complete 180 on the topic of the national debt, now saying that he’s not worried about it at all.

But all of the Fed’s desperate attempts to add liquidity to the markets will eventually come up against their greatest obstacle: fundamentals.

While the Fed may be willing to step in and pump liquidity into a market that is in free fall, the Fed will NOT be able to prevent the coming recession.

While the talking heads would love for you to believe that the path forward will be smooth and painless and that we’re in for a V-shaped recovery, that’s extremely unlikely given the impact the coronavirus will continue to have on many sectors of the economy.

This sure sounds like the Fed’s recent return to Quantitative Easing could be delaying the inevitable: a potentially deep recession.

Altucher concludes, “The uncomfortable reality is we need to give the market and the economy the necessary time to find the bottom.”

This “bottom” may arrive sooner than you think.

One trillion dollars is an incredible amount of money. You can see what it looks like in the image below. 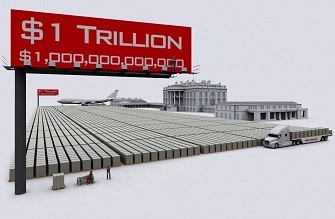 To provide some scale, the image includes a person, a semi-truck, an airplane and some buildings.

Yet to the federal government these days, $1 trillion is small beans.

According to an article on WolfStreet.com, over the last six weeks the U.S. national debt skyrocketed to $25.06 trillion.

There aren’t many other ways to think about this except calling it what it seems to be: insanity. On the chart below, Wolf Richter calls it “debt out the wazoo”: 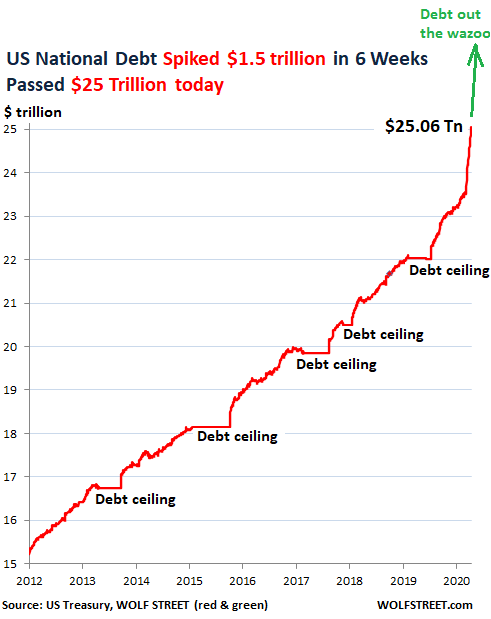 Wolf adds, “Those trillions are whizzing by so fast it’s hard to even see them. WOOSH… What was that? Oh, just another trillion. The flat spots in the chart are the periods when the debt bounced into the debt ceiling. Yeah, those were the days!”

With national debt growing trillions at a time, it sure doesn’t seem as though fundamentals are playing a primary role in decisions that are being made.

Especially when you consider that, according to the same WolfStreet article, the Fed added $1.39 billion in treasuries to its own balance sheet. This means that it effectively “monetized” about 90% of the new debt.

Bottom line, the piper will have to be paid, and fundamentals will eventually matter. No one can say for sure when that will be or what that will look like, but it sure seems like it will be historic.

Prepare Yourself in Case the Economy “Hits Bottom”

In the midst of all this madness in the markets, the Financial Times recently reported, “Some of the world’s largest hedge funds are raising their bets on gold.”

In addition to other ways to diversify your savings, perhaps it’s time for you to consider following the hedge funds’ lead.

Precious metals like gold and silver make for a good choice if the dollar goes sideways, inflation gets out of control, or reality sets in.