Home » Blog » Why Are Central Banks on a Ferocious Gold Buying Spree?

Why Are Central Banks on a Ferocious Gold Buying Spree? 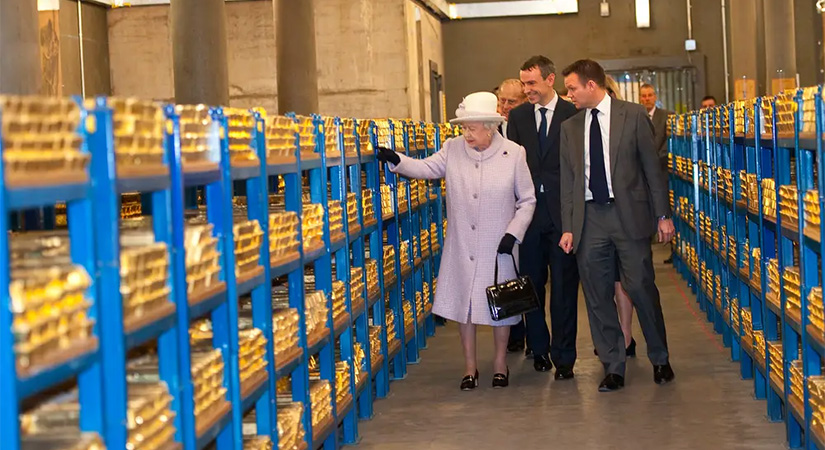 This week, Your News to Know rounds up the latest top stories involving gold and the overall economy. Stories include: Central banks are finding more uses for gold bullion, charts are signaling buy gold, and the state of gold and silver’s mine supply.

In the wake of gold briefly passing the strong $1,800 resistance level, Equinox Partners’ Sean Fieler spoke about gold’s role in the coming financial crisis. Fieler, whose firm manages $700 million, said that a sovereign debt crisis is what could catch some off-guard:

Looking at financial markets, the kindling is set, and you just need one little spark to ignite the fire.

Fieler pointed to the IMF’s ominous forecasts over how a debt crisis “isn’t here yet” earlier in the summer. As we know, the Federal Reserve has been attempting and failing to combat inflation by raising interest rates. It’s a course of action other central banks are taking, as well.

Fieler, like many, believes that the Fed’s delayed response, lackluster results and recessionary triggers will force it to abandon course in the second half of the year.

This alone makes for a bullish case for gold, both because of the inflationary implications and because it would mean the hiking cycle has done nothing but damage the economy. However, Fieler noted that sovereign nations are already feeling the impact of higher nominal rates and the increased debt payments that come as a result.

He pointed out that this crisis is already playing out in emerging markets. (Emerging market debt is often denominated, and paid back, in dollars rather than the nation’s own currency.) Many central banks seem to want to use gold to avoid a repayment crisis.

“The largest factor in the gold market is actually central bank participation in the market,” he noted. “In a recent survey, you saw a number of countries preannounce their intention to buy gold. Central banks are eager to preposition themselves for a world where the dollar is not the world’s only reserve currency. Gold seems to figure prominently in that calculation.”

Indeed, a mere continuation of the current pace of central bank buying invariably translates to higher gold prices based on supply and demand dynamics. The World Gold Council’s data showed that central banks bought 59 tons of gold in June with a total of 270 tons in the first half of the year and 180 tons so far. This puts them on track to continue with the record annual purchases they’ve made over the past few years.

This famous investor is telling us to start buying gold

Gold is fairly well-known for moving against sentiment, to the point where speculators’ positions can sometimes be used to gauge where the metal is headed. CNBC’s Jim Cramer’s took note of famed trader Larry Williams’ insight into gold and how it has been doing among small speculators, large speculators and commercial hedgers.

These three groups of “gold bettors”, namely the former, currently occupy the least amount of net long positions since May 2019. Market watchers will remember that gold began a sustained bout of gains soon afterwards. Likewise, when gold hit its March peak this year, these speculators held the most long positions in four years.

Taking into account the CFTC’s data dating back to 2014, Cramer said that excessive longing and shorting seems to have almost uniformly resulted in the price of the actual metal going up or down in the near future.

While the markets’ trajectory can oftentimes seem like anyone’s guess, buying gold when speculators are shorting has proven to be a fairly straightforward decision over the past nine years. It would also mean that the stock market might be scheduled for another round of trouble after two dismal quarters since the start of the year.

It can be easy to get caught up in gold’s short-term drivers and neglect some of the more long-term ones. Mine supply acts as one of gold’s primary fundamentals, dictating supply and demand and determining how gold’s price will move over a longer period. According to an analysis, the dwindling mine supply might have played a bigger role in gold’s price gains than the markets realize.

Going from last year to 2016, mine supply shrank by 7% during the five-year stretch, while silver’s dwindled by an even-larger 8.5%. A shrinking of mine supply has demonstrably translated to higher prices dating back the last 50 years, if not more, with the opposite holding true as well.

While current prices are making mining operations profitable by some margin, the mining sector itself doesn’t appear to be growing.

We know that mines saw heavy closures after gold slumped from its high in 2011, and that projects take much longer to start than close. Another factor that can’t be overlooked is that mining is simply geological. Mining gold is getting progressively more difficult. The most-accessible, easily-found gold deposits were mined out decades ago. Mining companies have to make significantly larger investments not only in excavation, but also in exploration. Today, promising gold sources are harder to find and harder to exploit than ever.

It’s no surprise that silver’s supply shrank even more considering how the metal is obtained. There aren’t many pure silver mines – rather, three-quarters of the world’s silver is mined along with industrial metals (notably lead, zinc and copper). This makes industrial response to silver’s price more complicated – here’s why…

Imagine you’re in charge of a chalcopyrite (copper and iron) mine in Butte, Montana. You recover about 6 oz of copper and iron with every 1 oz of silver. How much does silver’s price need to rise before it’s economically feasible for you to ramp up your mining efforts? To make this an even more challenging question, what if a rise in silver’s price corresponds with a fall in copper?

The economics of running a gold mine are quite straightforward compared to the typical silver mine. A gold miner only really needs to know their all-in sustaining costs (AISC) to calculate profitability. Mines that produce both silver and industrial metals have a lot more factors to consider before making new investments in equipment or labor.

The end result is simply that silver production is less responsive to changes in price than gold.

A sudden increase in silver demand, for any reason, is more likely to lead to a sharp rise in silver’s price. There’s no way to know how long it would last, either – because the financial decisions of silver miners are so complex. The law of supply and demand tells us that, eventually, rising silver prices will eventually be met by increased output. The equilibrium point between supply and demand just takes longer to reach, which is one of the primary drivers behind silver’s price volatility compared to gold’s.