The First Casualty of the Fed’s New, Radical Inflation Policy 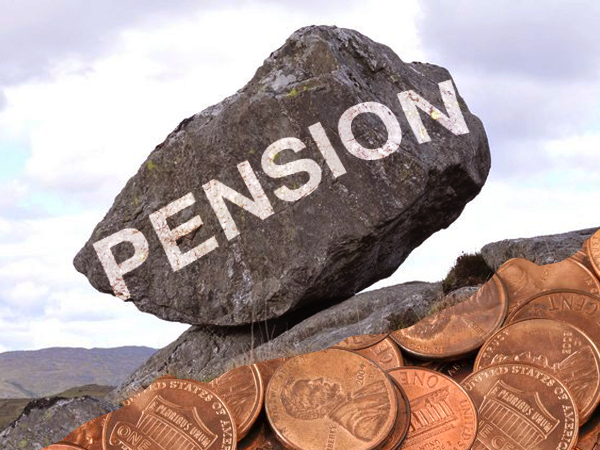 We have reported on the major troubles facing public pensions before, and how that could impact all retirement savers in the U.S.

We also know that the Fed just committed to let inflation run hot, which is likely to take a big bite out of retirement savings in the form of higher costs for consumers.

But a newer set of problems is also beginning to take shape, and they don’t leave many options for savers. According to a report from the website Governing:

The problem begins with bonds. One important consequence of these Fed actions is that the “real” yields (net of inflation) on Treasury Inflation-Protected Securities are now negative, ranging from minus 0.3 percent to minus 1.3 percent depending on when they mature.

As shown in the chart below from NASRA (an association of retirement administrators), public pension liabilities are continuing to grow in proportion to assets, while funding levels continue shrinking: 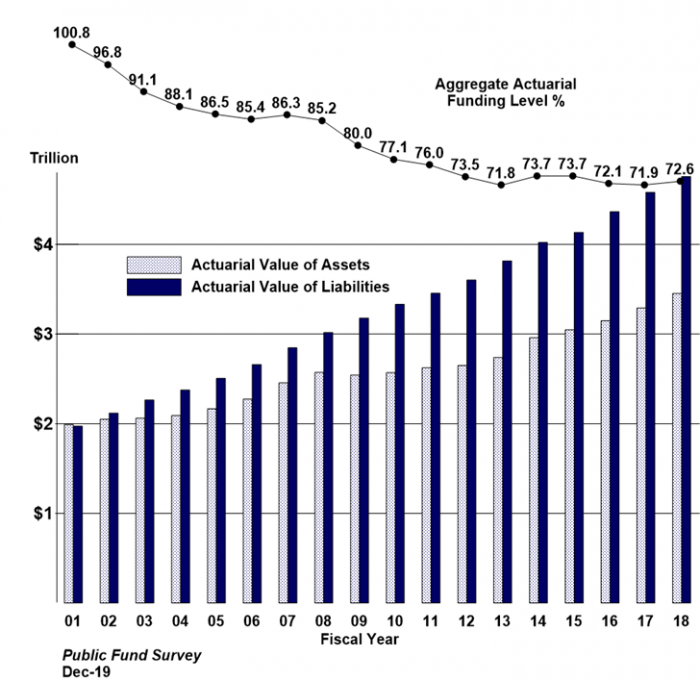 So, the negative bond yields, combined with lower funding and higher liability to asset ratio, seem to point to one outcome for pension managers: a move towards higher-risk assets to get necessary returns.

But that could also prove to be problematic for both the retirement saver and the public pensions themselves, as identified in the Governing report:

Riskier assets like stocks and real estate may no longer provide a “free lunch” to protect retirees from future inflation while also reliably providing sufficient investment returns to fund the pensions.

You can see from the chart below that the public pension assumed “rate of return” is already going down (shown by the blue and green lines). 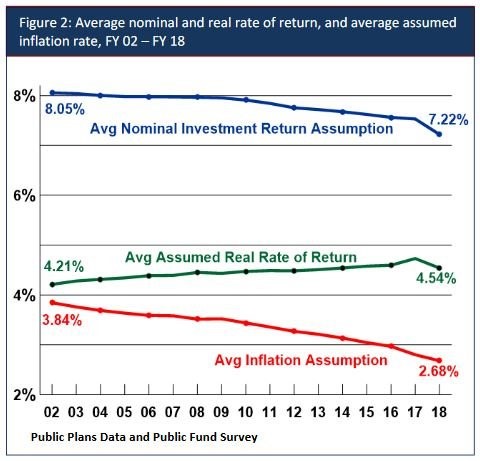 When you factor in the Fed’s recent turn toward a more inflationary policy, which could send inflation running as high as 13% in the coming months, the declining returns will likely be eaten up even further by the dollar’s loss in value. That would spell disaster for retirement savers with a public pension.

The official inflation rate, as we covered in a previous article, sits at 1.3%. (That low number is thanks in large part to an expected energy inflation offset.)

An astute commenter from that article recommended looking into real inflation at ShadowStats, as figured with methodology from 1980 (something we’ve also reported on before):

As you can see from the ShadowStats chart below, real inflation currently sits north of 8%:

The “monkeying” our commenter was referring to has been explained in basic terms by the website’s owner, John Williams:

In general terms, methodological shifts in government reporting have depressed reported inflation, moving the concept of the CPI away from being a measure of the cost of living needed to maintain a constant standard of living.

So, as always, it seems like “government reporting” doesn’t want to tell the whole story.

And the real inflation rate of approximately 8% will surely take a much bigger bite out of retirement savings across the board, including already-starving public pensions.

Develop Your Own “Exit” Plan

No matter the vehicle for your savings – whether it be a public pension, a 401(k), an IRA, or anything else – it’s always good to have an exit plan.

If you haven’t already considered your exit plan, it might be time to take a hard look. Look into diversification. Shift assets as you deem necessary into different risk categories. And, most importantly, be ready to shift more assets if things start to go south. Consider precious metals like gold and silver, which have both been proven as a hedge against out of control inflation.