Five “Must-Develop” Habits to Gain More Control Over Your Retirement 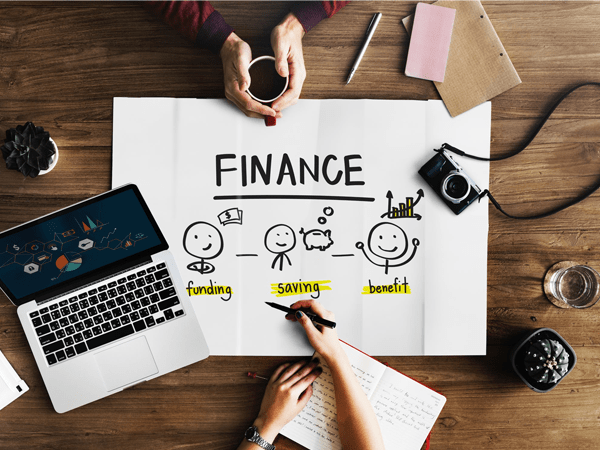 With an uncertain economic outlook in the U.S., it’s important that you obtain as much control over your retirement as possible.

It’s important because the Fed appears to be ignoring big economic red flags, corporations are buried in debt, and the overall “script” seems eerily similar to the Great Recession of 2008.

To help you gain more control over your retirement instead of relying on others, here are 5 “must-develop” financial habits you can adopt.

According to the New York Federal Reserve, consumer credit card debt skyrocketed to a record $870 billion at the end of 2018. This is a big part of the $3.82 trillion in total consumer debt since 2008, another record.

At Motley Fool, they provide a rule of thumb to consider when using credit cards:

As a general rule, you should never charge more on a credit card than you can afford to pay off by month’s end. Furthermore, don’t make the mistake of relying on credit cards to bail yourself out of a financial emergency. You should have dedicated savings so that an unplanned expense doesn’t end up costing you even more in accrued interest.

Accrued interest (which is compounded) can be your enemy. The idea is to minimize this interest as much as possible.

Earning interest on top of your interest paid is a concept that, according to Motley Fool, only one-third of Americans fully understand.

For example, if you put $1,000 in an account that paid 1% compound interest quarterly, your new balance after each quarter becomes the new balance for calculating interest.

The same Fool article illuminates how this can work in your favor for retirement if you saved $5,000 a year for 40 years with 8% return:

… when we take compounding into account, what we’re doing is adding that 8% return each year and then reinvesting that return to grow our balance into — wait for it — $1.3 million.

But keep in mind, credit card companies also use this principle to calculate interest on their debt, which is why credit card debt can have more impact than you might think.

According to an AICPA survey, it appears that Americans aren’t following a monthly budget for their expenses (emphasis ours):

The percent of Americans who follow a monthly budget has declined since the recession (39 percent in 2018, compared to 58 percent in 2015), according to an AICPA survey. Further, one in four Americans admit they do not pay all their bills on time and nearly one in ten now have debts in collection, according to the National Foundation for Credit Counseling.

If you’re heading for retirement, it’s a good idea to keep track of your income and expenses each month.

The New York Fed also reveals another shocking stat: a record 7 million Americans are at least 3 months behind on their car loan payments.

Aside from the fact a car is generally the second largest purchase most people make in their lifetime, Dr. Dean Stein Smith provides an idea future retirees could consider:

Before agreeing to any financing arrangement, read the fine print to make sure you understand exactly what you are getting into and make sure it fits into your overall budget. Lastly, if there are viable public transportation options in your local area, it might make sense to explore those as you evaluate your transportation or automobile needs.

Habit #5 – Build Up Your Emergency Savings

An official report titled Report on the Economic Well-Being of American Households issued in May 2018 stated that over 40% of all Americans cannot handle a $400 emergency with savings on hand.

According to Motley Fool, you should “prioritize your emergency fund above all else”. Especially because you never know when the time will come that you need those funds.

The purpose of considering developing financial habits like these is so that you can gain more control when it comes time to retire.

JP Morgan Chase Reveals What You Have Control Over

In their Guide to Retirement 2019, JP Morgan Chase revealed a “30,000 foot overview” of retirement. They boiled it down to focusing on factors you can totally control, while still evaluating other factors that are out of your control (see graphic below): 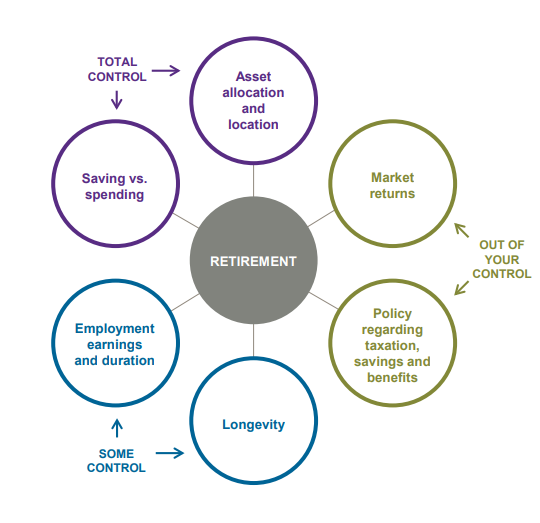 According to the chart, saving versus spending and allocation of assets (such as physical gold and silver) are the only two factors you have total control over when it comes to planning for retirement. It would be unwise to focus only on the things out of your control while ignoring the ones within.

Some things are simply out of your control when it comes to planning, but not everything. Like the two factors shown here, the 5 habits stated above are things you have control over now to help ensure you have as much control as possible over your retirement in the future.