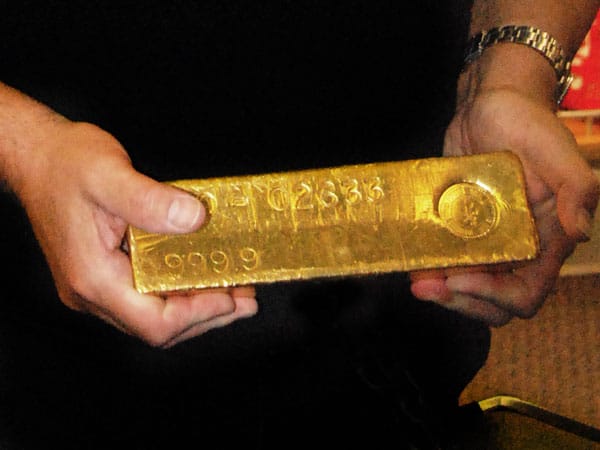 You know something’s up when even gold’s biggest critics start changing their tune.

Over the course of history, gold has proven itself time and time again as a sound safe haven. Yet, a small handful of Wall Street bigwigs have always criticized it, pigeon-holing it and trying to persuade the very people it could help the most from giving it a chance.

But the tables are now turning, and one of the biggest gold detractors of them all is actually telling his clients to buy it! Here’s the reason why.

Gold worth as much as Indian wampum?

Richard Bernstein, esteemed wealth manager and ex-chief investment strategist at Merrill Lynch, has never minced words when it comes to his feelings about gold. According to CNBC, Bernstein’s favorite question to ask students during his time teaching at New York University’s Stern School of Business was this: What’s the difference between gold and wampum?

Wampum, for those not aware, was the currency fashioned from seashells that American Indians used to trade. Like we said, Bernstein has never been kind to gold.

He says both gold and wampum are, for theoretical purposes, more or less the same. They’re both “real assets.” That is to say they both represent tangible, finite containers of value that are universally recognized and impossible for external forces to manipulate.

In pre-colonial America, a handful of wampum was more valuable than anything else. In today’s America, the same is true of gold.

Why “real assets” are crucial to protect from inflation

Although Bernstein gets his kicks comparing gold to wampum, now he’s having to eat his words. The underlying argument behind his rhetorical jab at gold is actually the same reason why he’s telling his clients today to buy it up.

See, Bernstein makes the important observation that real assets are great buys during times when inflation expectations go through the roof, which just so happens to be the case in America right now.

“For a long time, gold was really not a diversifier,” Bernstein said. When gold prices hit new highs earlier this decade, gold had a positive correlation to stocks, meaning when stocks rose, so did gold prices.

Gold has become slightly negatively correlated to the stock market, Bernstein said, and so gold adds extra ballast in a portfolio to hedge against volatility. “It’s a change in the way we look at the world,” Bernstein said.

Surely, Bernstein’s comments will drive a whole new wave of Americans into the world of gold. When even the critics are buying, it’s hard to stay away, right?

If you’ve been wondering when the time is right to allocate a portion of your savings to gold, seeing comments like these from someone like Bernstein should help bring your strategy into focus.