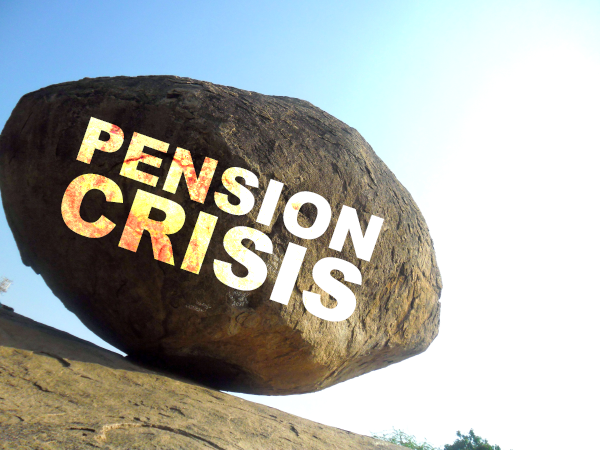 We’ve covered a part of General Electric’s (GE) pension nightmare before, but now it appears that nightmare has gotten scarier.

According to USA Today, “General Electric is offering buyouts to about 100,000 pensioners and freezing the retiree payments for about 20,700 salaried pensioners.”

So 20,700 people have suddenly seen the last of their pension payments.

GE was an absolute titan, and is involved in several major industries, so thoughts of “too big to fail” might come to mind when you think about this multi-dimensional company.

But the reason for their recent decision regarding pensions is troubling, described by USA Today as an “effort to shed debt as it continues to downsize amid financial struggles.”

To be clear, the pension program that employees contributed to, and were promised payments from during retirement, has been reduced by GE in an effort to shed billions in corporate debt and reduce its pension deficit.

Commenting on this seemingly desperate act, the same USA Today piece quotes CFRA Research stock analyst Jim Corridore, “This move shows that GE is looking to pull any and all levers to restore its financial health.” (emphasis ours)

So knowing GE is considering all options in order to recover from its financial setbacks, it begs the question…

Why would they offer to pay lump sums of cash for these buyouts?

The short answer is that it’s a cost-beneficial move. The longer answer, however, is provided in another USA Today article:

Companies offer lump-sum buyouts because it’s typically cheaper for them in the long run. Partially that’s due to longer life spans, with some Americans spending 30 or 40 years in retirement, compared with a 10- or 20-year retirement for previous generations. That’s making pensions more expensive for businesses.

General Electric isn’t the only company using risk analysis to determine whether or not retirees will draw pension payments for longer than originally planned for. Verizon and FedEx are conducting similar analysis and offering similar pension buyouts.

As corporate pension programs are being used as leverage to pay off billions in debt, another important question is raised…

While a miracle could still happen, it sure seems like corporate pensions (one form of defined benefit program) are on their last legs.

“In the bigger picture, GE is just going the way that most of the private sector in the United States has gone … it’s really over in the private sector,” says Alicia Munnell, director of the Center for Retirement Research at Boston College. “The question is just when does the last plan close down?”

So defined benefit programs are certainly dwindling. A final USA Today piece gives four reasons why this is happening:

The same piece finished with a stinging conclusion:

“The top 100 private plans alone owe their workers $1.66 trillion, according to the actuarial firm Milliman. In other words, while most active employees won’t be getting a pension, the legacy of America’s pension system will live on for decades.”

Not a great legacy for future retirees who contributed to these pension programs and may never see a dime.

And don’t forget about Social Security, another form of defined benefit program, which, as we’ve highlighted a few times, is also facing its mortality.

Starting next year, the Social Security Administration projects to be spending more than it takes in. This starts a short period of time before it becomes insolvent if nothing is done by 2034.

Of course, Congress is confident they can solve the dilemma by then. But who knows what can happen with Social Security behind the 8-ball?

The bottom line is, you can’t place your financial future in the hands of either pensions or Social Security. Best to consider taking matters into your own hands instead.

Act As Though Pensions and Social Security Are Going Away

The fact is, most pension programs (public and private) are headed towards extinction, and Social Security isn’t far behind.

It’s a good idea to be prepared in case yours gets cut, is stopped altogether, or you are offered a “buyout” that may or may not make sense. And don’t wait to get prepared. The best time to start is now.

One way out is to do whatever it takes to ensure your retirement is built on as solid a foundation as possible. Examine diversification of your assets, and start taking back control of your own portfolio.

Physical assets such as gold and silver can add stability, and you’ll never have to deal with a buyout.