3 Global Banks Terrified by This Chart 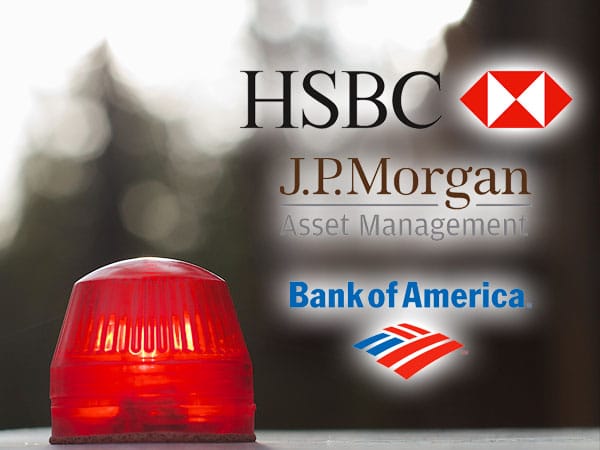 In recent weeks, some top market watchers from Bank of America, HSBC, and JPMorgan Chase have seen a disturbing pattern forming in the stock market. With suspicions about the financial crises of recent years being nothing more than precursors to something much bigger, new analysis could be signaling the approach of what professionals are calling a “third wave” crisis.

Year after year, we’ve seen the Federal Reserve, the European Central Bank and other central banks around the world apply superficial solutions to deep, fundamental problems in our global economy. But that misguided string of decisions could soon culminate in a far more destructive crisis, forcing governments and central banks to finally face reality and let the market purge the toxic baggage accumulated from years of failed fiscal policy.

Technical analysts at three of the world’s foremost banking organizations are all looking at the data and giving a similar warning: central banks have put an already weak economy on borrowed time with irresponsible policy, and now, the day of reckoning may finally be within sight.

Murray Gunn, head of technical analysis at HSBC, points to a tested market prediction theory called the Elliott Wave Principle as part of his warning. The theory applies advanced mathematics of probability to the ebb and flow of pricing data, and it’s painting a troubling picture of what’s ahead.

In a note released to HSBC clients this week, Gunn said:

“With the US stock market selling off aggressively on 11 October, we now issue a RED ALERT… The fall was broad-based and the Traders Index (TRIN) showed intense selling pressure as the market moved to the lows of the day. The VIX index, a barometer of nervousness, has been making a series of higher lows since August.”

Below is a visual representation of what has analysts so worried. 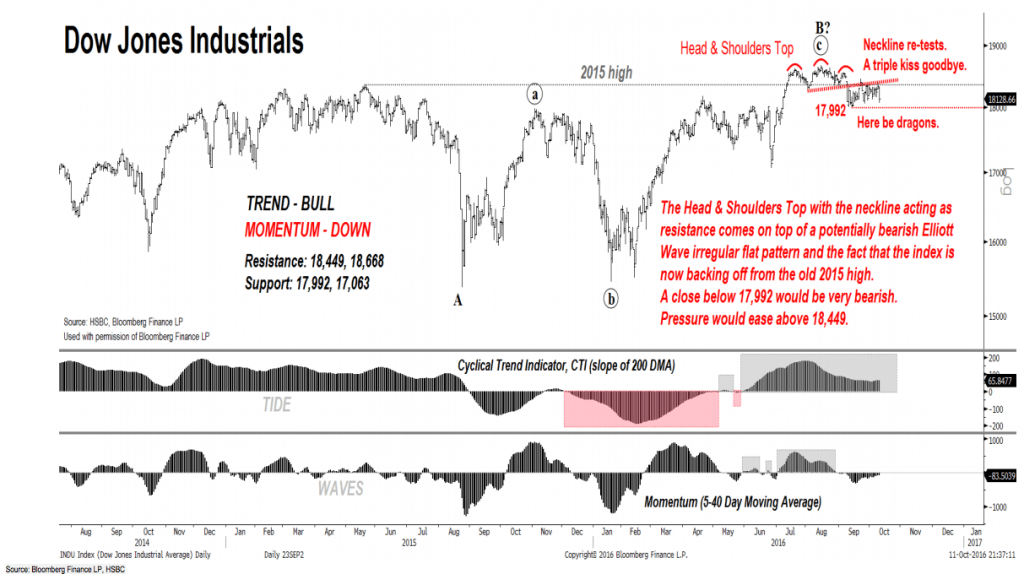 Market indicators are giving reason to believe this “third wave” might be a completely different animal than anything we’ve seen in decades.

Tom Fitzpatrick, top strategist at Citi, has found just one other period with data matching today’s: the months preceding Black Monday in 1987, one of the biggest global crashes in history.

Here’s the chart that Fitzpatrick says gave him and his team “the chills,” showing striking similarity between 2016 and 1987: 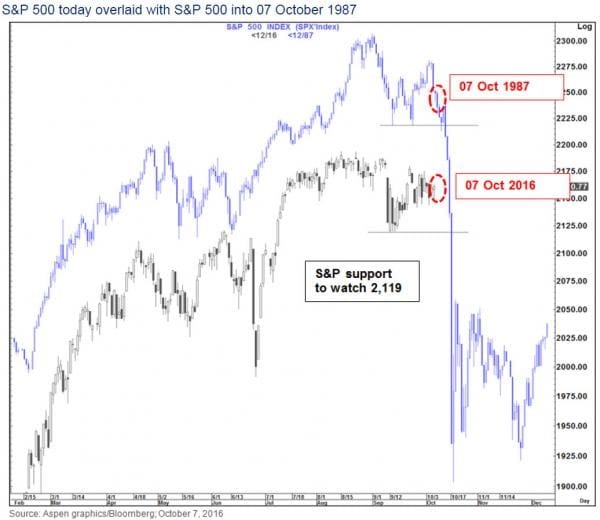 The similarity isn’t the only thing that has Fitzpatrick concerned either. In a note published last week, he stated several other reasons to be skeptical of the market’s safety right now:

Oftentimes throughout history, gold has had a unique relationship with the stock market, in that when stocks have crashed, gold has held its own. For example, months after stocks tanked in 2008, the price of gold was higher.

Gold can shield wealth by giving safe haven in a real asset. If this looming “third wave” crisis is as real as experts believe, don’t you want your savings to be protected?