Home » Blog » Global Powers Take Next Step to Dethrone U.S. and the Dollar

Global Powers Take Next Step to Dethrone U.S. and the Dollar 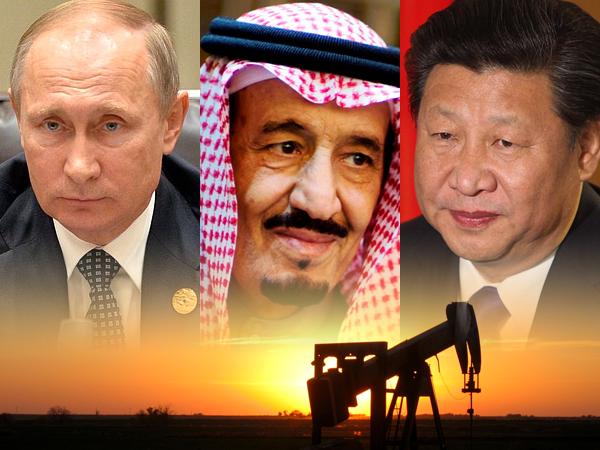 China, Russia, and Saudi Arabia are rapidly aligning in response to trade sanctions and political discord from western nations. Together, they could soon bring a dramatic end to the global supremacy of America and the U.S dollar.

Foreign leaders have been laying the groundwork to overturn America’s international superpower status for years. But now, their plan is finally coming to fruition.

Let’s examine China, Russia, and Saudi Arabia’s latest steps to dethroning America and the dollar. And while their actions will likely have serious consequences for your bank account, there is one sure way to stay protected…

My Enemy’s Enemy Is My Friend

For decades, China, Russia, and Saudi Arabia had little incentive to be allies. In fact, relations amongst the three nations were either cold or nonexistent.

But over the past few years, that all started to change for one simple reason: The U.S. became their common enemy.

So what happened to make U.S. relations with these three nations so rocky?

In the case of China, accusations of currency manipulation, threats of increased trade tariffs, and opposition to Beijing’s “One China” policy — the nation’s legal push to classify mainland China and Taiwan as a single entity — brought U.S.-China relations to an all-time low.

The U.S.’s relationship with Saudi Arabia began to crumble back in 2014, when the Obama Administration refused to slow Iran’s growing power in the Middle East, while actually attempting to restore U.S.-Iran relations.

Saudi leaders viewed this as a clear affront to the 1945 meeting between President Franklin D. Roosevelt and King Abdulaziz, which established an agreement to exchange protection from the U.S. for unencumbered oil trade between the two countries — while also setting a new precedent that Saudi oil trade be brokered primarily in U.S. dollars (birthing the petrodollar).

Finally, the U.S. earned its last foe to complete the trifecta by levying massive sanctions against Russia in August this year.

While the U.S. torpedoed its relationships with these three nations, a retaliation plan began taking shape. Now that plan is well underway, and foreign leaders are completing one of its last big steps…

Joining Forces to Kill the Dollar

Foreign leaders in Russia, China, and Saudi Arabia are going public with their plan to dethrone the U.S. and kill off the dollar.

Oil is the tool they’ll use to do it.

The dollar’s hegemony as a vehicle for oil trade (aka the petrodollar) is one of its main support structures.

If the world’s largest oil exporters — Saudi Arabia and Russia — decide to accept payments in some other currency — like Chinese yuan — the dollar will slowly suffocate.

As you can see, these three countries hold all the cards. And now they’re starting to lay them down…

Russia’s third largest oil producer, Gazprom, is already settling the entirety of its transactions in yuan, and China is fiercely negotiating similar agreements with other producers located in the world’s most prominent oil exporting nations. And if those producers aren’t keen to accept yuan at face value, China is sweetening the pot with a new yuan-denominated oil futures contract directly convertible to gold.

To oil producers, these new contracts make the dollar look like Monopoly money…

On top of all this, Saudi monarch King Salman just made a historic visit to Russia for a meeting with Vladimir Putin — a surprising move after decades of less than ideal relations.

Oil and energy topics weighed heavily on the agenda:

Following the meeting, the two countries launched a joint energy investment fund worth $1 billion. The fund could include investments in natural gas projects and petrochemical plants.

Everything is falling into place for a three-way alliance between China, Russia, and Saudi Arabia to topple the dollar and U.S. economic supremacy.

That said, here is one wise move Americans must consider before this situation escalates any further…

Do This Before Their Plan Is Complete

If these three nations succeed in their goal, there are two main threats to your savings:

What’s happening today could result in one of the most dramatic devaluations the dollar has ever seen. Meanwhile, other foreign currencies would be unaffected, and the yuan would likely gain in value.

Since a vast majority of the goods we buy on a daily basis are imported, your dollars stand to lose an excruciating amount of real-world spending power if this comes to pass.

As the U.S. gets boxed out of international trade by China, Russia, and Saudi Arabia, it will put a significant strain on our national economy. And there’s a good chance that strain will lead to a recession, or worse.

That means anyone with considerable investments in the market could be hit with painful losses.

However, there is a unique class of assets that can guard against both of these risks: “real assets” like physical precious metals.

Precious metals are historically proven to appreciate in value whenever the dollar falls. And they tend to grow significantly amidst market declines, crashes, and recessions.

That said, precious metals offer you the most protection before these adverse events take place. When the shoe finally drops, reactive buyers will be snatching up metals fast, which instantly drives up prices.

Don’t wait for this plan to take effect before protecting your wealth.