Home » Blog » Why Are Gold And The Dollar Spiking At The Same Time?

Why Are Gold And The Dollar Spiking At The Same Time?

In an extremely rare occurrence, gold and the USD have recently been rising at the same time. Is this a sign of something ominous to come? 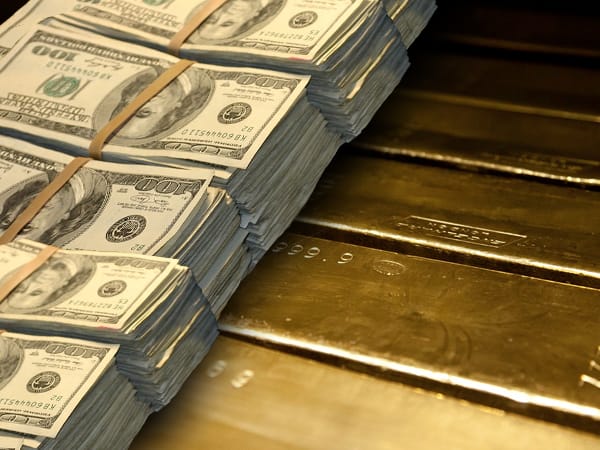 This week, Your News to Know rounds up the hottest new stories involving finance and the gold market. Stories include: Gold signals that the markets have changed, loading up on cash and gold is the only way out of this, and a gold veteran says Brexit could be the start of a major bull market.

Gold is sending a dark sign that everything has changed

Recently, the shocking Brexit decision caused investors to flock to safe assets like cash and gold, which has caused both to rally. Yet analyst Raoul Pal and former fund manager Grant Williams are concerned about an overlooked aspect of the parallel rally: It’s extremely rare for both the dollar and gold to spike simultaneously.

Pal and Williams recently explained the ramifications of this on their Real Vision Television news service. “It doesn’t happen often, but when it does it’s a sure sign people are nervous — saw it in 2008, saw it in the 30s. It’s a sign we are at a point of critical stress,” said Williams, adding that the move is indicative of the markets “moving toward an end game of sorts.”

The breakdown of the standard relationship between cash and gold should be a concern to everyone, and Pal blames the difficult situation in the markets for it. “This never happens… It’s a dark sign. People are forced to buy dollars because of the global carry-trade. They want to own gold because in a negative interest rate environment — if your interest in Germany is -1%, you’re better off to own gold,” he said.

Williams’ and Pal’s sentiment echoes that of billionaire investor Stanley Druckenmiller in his recent speech at the Sohn Conference in May. Speaking about the yellow metal, he said, “My hint is what is the one asset you did not want to own when I started Duquesne in 1981? It’s traded for 5,000 years and for the first time has a positive carry in many parts of the globe as bankers are now experimenting with the absurd notion of negative interest rates. Some regard it as a metal. We regard it as a currency, and it remains our largest currency allocation.”

In a recent piece on Forbes, investor and founder of Mauldin Economics, John Mauldin, went over why gold and cash are the best assets to have. Mauldin feels that something in the markets has got to give: The currency devaluations, negative rate policies and slow economic growth are confusing even the most experienced investor and forming a bleak outlook.

Mauldin believes it’s only a matter of time before investors realize that central banks are stumbling in the dark. When they do, he predicts that we will either be condemned to a sharp breakdown in the markets or a slow-rolling panic. “Either way, the price of gold will soar,” Mauldin says.

To support his stance, Mauldin quotes notable investors James Grant and Grant Williams regarding their views on safe money. Both Grant and Williams recently spoke favorably about cash and gold, pointing to the yellow metal as the asset to watch in the near future. Grant sees a use for gold far beyond its benefits in the case of a financial apocalypse. “Gold isn’t so much a hedge against Armageddon… as it is against monetary shenanigans. When the economic establishment encourages the idea that gold is ‘good for nothing,’ it’s almost always a good time to buy [gold].”

Stocks are helping to illustrate current issues with the markets: The U.S. stock market is almost unprecedentedly overvalued as evidenced by the Wilshire 5000 Market Index being greater than the country’s overall GDP by over 20%.

And while cash – in particular the dollar – is considered a safe and liquid asset, Mauldin explains why only gold can bring the kind of certainty needed with a greenback that could be on its way out. Despite its long-term stability and use as a currency for over 5,000 years, gold only makes up for around 1% of the average portfolio due to negative market sentiment. Once people around the world realize that central banks are out of their depth, however, Mauldin expects that the yellow metal will “certainly soar”.

Gold veteran says Brexit could cause a major bull market

The recent passing of the Brexit vote helped propel the rallying yellow metal even further as gold is now up well over 20% since the start of 2016. The vote in favor helped gold storm past $1,300 an ounce, underlining predictions by major banks like Morgan Stanley and Goldman Sachs that gold will bounce 8-13% in the near term.

Yet Evolution Mining Ltd.’s Jake Klein, a veteran with over 20 years of experience in the industry, feels that gold is just starting out. As seen on Bloomberg, Klein believes that Brexit could mark the start of “a major bull market” in the metal since the futures of both the European Union and the United Kingdom are questionable. Klein adds, “I guess to me, the most interesting thing is: are we seeing the first fault lines of a major correction and change in the financial and political systems? If that’s the case, then we could very well be at the early stages of a major bull market.”

And while he acknowledged that Brexit is an event with disastrous implications, Klein couldn’t help but take note that “from a gold investor perspective and a shareholder of Evolution perspective, it’s certainly been very positive.”

“We’re obviously benefiting a lot from the gold price rise,” said Klein. “I would point out that gold is only over $1,300 now, and in 2011, it was over $1,900, so there’s potentially still a long way to go. But certainly interest in gold, interest in gold stocks, and interest in Evolution is rising.”

Should you hold cash or gold? Find out here.