Home » Blog » Gold and Bitcoin Can Co-Exist as Inflation Hedges

Gold and Bitcoin Can Co-Exist as Inflation Hedges 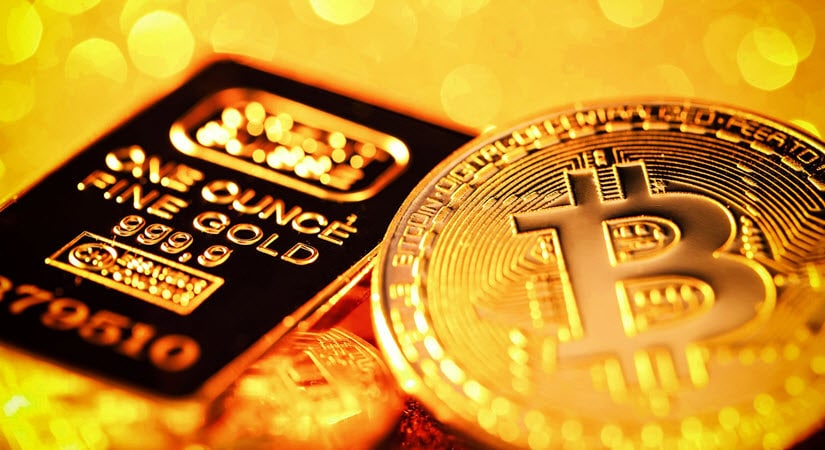 This week, Your News to Know rounds up the latest top stories involving gold and the overall economy. Stories include: Gold and bitcoin can co-exist as inflation hedges, Russia bolsters its gold and foreign reserve holdings, and how the silver rush has given way to silver scams.

In a recent interview, Digix co-founder and COO Shaun Djie spoke about the comparisons between gold and bitcoin, the metal’s role in the monetary system and what investors can expect in short-term economic conditions.

As Djie noted, both gold and bitcoin attract safe-haven investment. Gold continues to cater to the physical crowd and could end up outperforming as regulators take a closer look at the cryptocurrency space:

I don’t think one is meant to displace the other. Gold has been around for a lot longer. And the physical aspect of it would still be key and attractive to investors out there. The market is sufficient enough to contain both asset classes. One would appeal to more to the digital crowd and the other more to the physical crowd.

Djie blames the lack of movement in the gold market on investors who have been overly eager to turn to speculative assets amid questionably optimistic signals, driving up what were already astronomical stock valuations.

“All the excess liquidity out there has been flowing to highly speculative assets. The stock market is overvalued today. We are seeing new all-time highs almost every other week,” he explained. “People are finding the idea of investing a much less daunting one than two years ago in light of the social media and all the commentary out there.”

As the optimism abates, investors are likely to wake up to the reality of brewing inflation, worldwide economic stimulus, interest rates at all-time lows and a stock market with historically high valuation. In particular, Djie expects pent-up inflation from all the money pumped into the economy to come into prominence over the next two years.

Likewise, Djie pointed to the ever-escalating trade war between the U.S. and China as something that could soon reach a boiling point and provide additional support for haven assets. “We are likely see a pivotal power shift in the next four years when it comes to the trade war tensions between China and the U.S., and it will cause gold to trade upwards,” he noted.

In its ongoing bid to diversify its holdings and lessen dependence on the U.S. dollar, Russia’s central bank announced that its international reserves recently rose by 5.4 billion or 0.9%. According to the latest data, the bank’s foreign exchange (forex) holdings reached $591.5 billion on February 12, placing them nearly $100 billion above the bank’s previously-stated target.

While the central bank’s infamous gold bullion purchases halted in April, its appetite for the metal has hardly diminished. Besides ramping up local mine production, the bank has made heavy investments in liquid assets such as gold derivatives, along with other currencies and Special Drawing Rights (SDR) assets.

In their official statement, central bank officials attributed the growth of Russia’s foreign reserves to positive exchange rate revaluation and the recent spike in gold prices. The rebalancing has placed the bank’s share of the U.S. dollar at 22.2% in June 2019, below the gold allocation of 22.9% when the announcement was made.

As interest in silver surges, so do scams involving fake silver coins

As director of the Anti-Counterfeiting Educational Foundation (ACEF) Doug Davis explained, not all silver coins are made the same, especially during a time when the market is seeing a rush from all fronts. The frenzy to obtain bullion and proof coins and the resulting supply glut has given rise to scams which offer to sell fake silver dollar coins to unsuspecting buyers.

“The Chinese are blowing up the web selling fake silver dollars,” said Davis, explaining that Morgan silver dollars are among the most frequently listed in fraud reports. “We’ve seen suspicious ads posted on many platforms, including Amazon and Facebook.”

Davis highlighted the importance of obtaining coins from reputable dealers with a solid background, especially for investors and collectors who might not be all that familiar with the physical precious metals market. The Morgan silver coins stand out due to their history and high individual value, bearing the name of renowned designer George T. Morgan and having been issued by the U.S. Mint between 1878 and 1904, along with a second mintage in 1921.

As Richard Weaver, president of the Professional Numismatists Guild (PNG) noted, a telling red flag that the coins in question are fakes is often the price. Genuine Morgan coins, which have a silver content of roughly three-quarters of an ounce, normally sell for close to $900 each. Weaver took note of a recent social media listing which offered to sell counterfeit Morgans for $199 each, adding that scammers will sometimes go through the trouble of creating fake certification holders to make the sale look more credible.