The Buying Spree Continues: Gold Demand Up in At Least Three Continents

Much of the recent news on gold has been negative, but with high demand and lack of supply, when might things change turn around for the metal? Read further to get all the details… 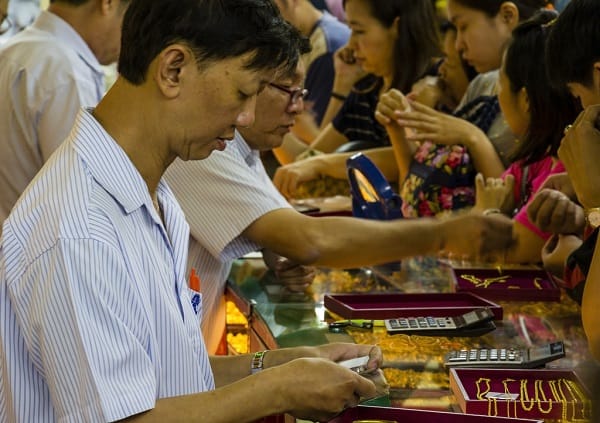 This week, Your News to Know reports on the important news stories regarding finances and the gold market. Stories include: At least three continents still show enormous demand for physical gold, what makes now the ideal time to buy gold, and why you shouldn’t give up on gold just yet.

At least three of the world’s continents are showing enormous demand for physical gold, in spite – or perhaps because – of gold’s recent performance. While acknowledging that this demand might have already saved gold from falling further, Lawrence Williams also wonders: can it help gold do even better?

In the past few months, bullion sales in the U.S. have been doing extremely well. This is even more impressive when you take into account that the U.S. has somewhat been the epicenter of negative sentiment towards gold. The U.S. Mint’s official July sales figures sit at 202,000 ounces (6.28 tons) – the highest since April of 2013 and the third-highest overall. Clearly, a lower gold price prompted many to stock up on the yellow metal. Silver sales were just as strong, to a point where insufficient supplies forced the Mint to suspend sales for almost an entire month.

Asian gold demand traditionally boils down to a contest for the top consumer spot between China and India. Withdrawals from the Shanghai Gold Exchange (SGE) are double what they usually are during this slow time of year – the 73.3 ton weekly withdrawal figure is the third-highest on record. As for India, their latest import figures are rivaling those from 2011 and 2012, when the country was possibly the top consumer in the world. These numbers exclude smuggled gold imports, which have been booming due to the 10% import tax. Together, the combined gold demand of the two countries in May, of nearly 300 tons, comfortably exceeded the 270 tons of newly mined ore during the same month.

In Australia, the Perth Mint had a problem similar to its U.S. counterpart. Despite Australia being the second-largest gold producer, the Mint still experienced a supply deficit, with its treasurer Nigel Moffatt telling Bloomberg TV: “Everything we get in is going straight out the door as soon as we refine it.”

Williams concludes that a combination of persistent ‘Greek effect’ and lessened gold prices might also be driving demand in Europe, although no official figures are available yet. The latter, in particular, seems to be doing wonders for demand, with Williams believing that the age-old ‘buy when there’s blood in the streets’ saying is in play.

Michael Brush’ recent analysis on MarketWatch makes a convincing case for buying gold in a time of gloomy sentiment, quoting numerous analysts who believe that the metal is due for a bounce. But how much time left is there to capitalize?

Not a lot, according to Lawrence McDonald, head of U.S. macro strategy at Societe Generale. He believes that the overselling can’t last much longer, and recent capitulation in the gold miners supports this. “We are witnessing seller exhaustion, and we don’t believe the recent breadth of the selling is sustainable,” he says. Credit Suisse gold analyst Anita Soni is another expert who believes gold will bounce soon, placing the trading range between $1,100-$1,300 per ounce in the upcoming quarters.

Indeed, several experts believe that a “bear market rally” will soon be in the works, one that will take gold 10-30 percent higher. Sentiment is certainly extreme: The last time investor position was short 16 million ounces (in July of 2013), gold promptly experienced a 36% surge. But a high short position isn’t the only argument for gold.

Brush lists several more reasons why people should look to buy gold now. One is the fact that the dollar’s current strength is unsustainable – not just because of the immense level debt, but also because the Fed might look to knock the greenback down a peg to promote U.S. growth. Yet another simple, yet compelling reason to buy gold is that the yellow metal’s season is right around the corner: Increased buying in China and India during Q4 2015 and Q1 2016 is also bound to provide a boost.

Of course, a bounce being in the works isn’t the only reason you should be looking to take advantage of gold’s current prices. Brush cites experts who believe that now is also an ideal time to add some insurance to your portfolio in case we face another global financial crisis. Matthew McLennan of First Eagle Investment Management believes that having 5-10 percent of your assets in physical gold is a great hedge against disaster. “And you can buy that hedge at lower price now than any time in the last five years,” he added.

Why you shouldn’t be giving up on gold just yet

It might be tempting to give up on the yellow metal considering its recent performance, but many bulls are making the mistake of throwing in the towel too soon. In truth, there’s good evidence that gold might see a rally sooner rather than later, making many quitters wish they weathered the storm instead.

TheStreet’s Carley Garner crunches the numbers and shows that gold is resilient and always mounts a strong comeback after a period of struggle. The last time large speculators were as bearish on gold as they are now was 2001. From there, the metal rallied from $300 to $1,900 in the span of several years. The most impressive part of this feat was that a good portion of the rally was actually unaffected by the global financial crisis.

Seasons also play their part in gold’s strength. Many traders are choosing to sit on the sidelines after their August contract ends – this often marks a period of lower gold prices. However, these traders can still opt to buy into a December contract on later notice. Data from Moore Research Center Inc. shows that over 15 and 30-year long periods, gold is at its annual low during June and July and starts picking up around early August.

Garner adds: “On a daily chart of gold, as well as the weekly, the relative strength index (RSI) is hovering below 30. Historically, this is a relatively rare event, but when it does occur it has frequently been followed by a sharp rally.” He also notes that gold’s price remained respectable despite breaches in support levels, adding that another plunge would present a “rare opportunity” for gold bulls.