The Anomaly That Could Cause Gold to “Break to the Upside” 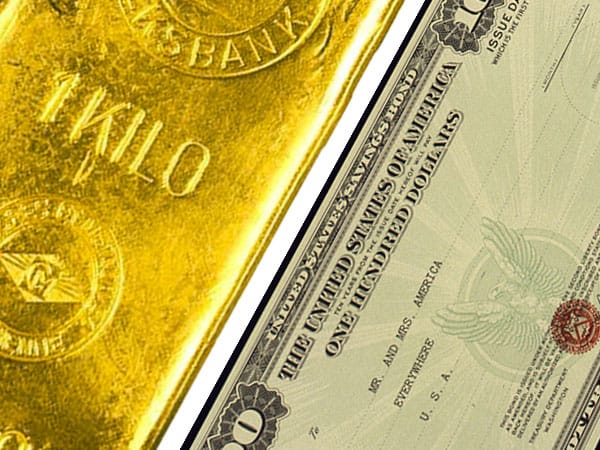 Your News to Know is back with another weekly roundup of the top news stories covering the gold market and the overall economy. Stories include: The curious case of gold and bonds, 3 illuminating things about the yellow metal, and gold is doing something it’s only done twice in the past decade.

What to do when gold and bonds aren’t making sense
Dennis Gartman, editor and publisher of The Gartman Letter, recently spoke to CNBC about an unusual development between gold and bonds: The two assets, which have historically been inversely correlated, are now moving in tandem. “Having been at this for 40 years, I always look for anomalies,” Gartman told CNBC. “It’s very strange to me that, since June, as went gold so went the bond market.”

Gold and bonds moving up and down together befuddles even experienced investors like Gartman, who struggles to make sense of the movement. And while last week’s research note from Bank of America-Merrill Lynch suggested that both items are being bolstered by a “flight to safety” fueled by risks from Europe, Gartman warns against warming up to bonds.

The recent speech by Federal Reserve Chair Janet Yellen on August 26 – interpreted as slightly hawkish in tone – saw both 2- and 10-year Treasury notes spike notably, albeit for a short period. Afterwards, the correlation seemed to break off as bonds fell sharply while gold continued to post gains. “You don’t want to risk much on this trade,” said Gartman of investing in bonds.

Instead, the publisher is optimistic on the yellow metal, especially if gold and bonds continue to drift apart. “I can see gold breaking up to the upside and I can see the bond market breaking down to the downside,” Gartman explained. “If it starts to work [and] this anomaly of moving in tandem starts to break apart… you could see the gold market move $40 or $50 higher, and you could see the Treasuries note move three or four [basis] points lower.”

3 illuminating things most people don’t know about gold
Even some of those who were once bearish on gold are now warming up to the metal thanks to its recent impressive gains – even more so when considering the high likelihood of gold continuing its climb. Yet even the most astute investor can overlook important data, which is why TheStreet’s Kim Iskyan put together a list of three illuminating things about gold that are flying under the radar.

#1: Due to higher prices, everyone seems to want less gold – except investors. Central banks and other big institutions, jewelry, technology and investment are the four main sources of gold demand. Demand from the first three fell in the second quarter, as is expected when prices soar. Yet investors are buying more gold than they have in a long time; during the same period, investment demand went up by 141% compared to the previous year. This also highlights gold’s built-in hedge: Regardless of whether prices are high or low, the metal will always have its buyers.

#2: Japan, Britain and the U.S. are buying more gold than most. These three countries showed the highest growth in demand from April to June, and with good reason: Each of them is dealing with a high degree of uncertainty and/or harsh policies. Japan’s negative rates crippled bond yields, U.K’s Brexit vote and subsequent sterling sell-off scared British investors and the upcoming U.S. presidential election ranks among the most controversial in history. To top things off, Americans are also turning to gold as a globally accepted store of value amid concerns over a potential decline of the dollar.

#3: Asia is still the top buyer of gold. Despite gold demand in India and China falling by 18% and 14% respectively, the two top consumers still make up for 45% of global global demand. Together with other regions, Asia accounts for a total of 58% of overall demand for the metal.

Gold is doing something it’s only done twice in the past decade
A recent analysis from Deutsche Bank’s Michael Hsueh and Grant Sporre shows a rare irregularity in gold’s current movements – one that hints as to where gold’s current price should really be.

As seen on Yahoo Finance, the two analysts compared gold price changes with central bank balance-sheet expansion rates and noticed something was off; as opposed to expanding together, the price of gold hasn’t been keeping up. According to Hsueh and Sporre, “when viewed against the aggregated balance sheet of the ‘big four’ global central banks (the Fed, ECB, BoJ and PBoC)” the metal can be seen as “worth closer to USD1,700/oz, versus the spot price of USD1,326/oz.”

The analysts further explained their argument: “Over the same period [2005 till now] as the aggregate central bank balance sheet expanded by 300%, global above ground stocks grew by 19% in tonnage terms or c.200% in value terms. If we were to assume that the value of gold should appreciate to keep the overall value of the big four aggregate balance sheet equivalent to that of the value of the above ground gold stocks, then gold should be trading closer to USD1,700/oz.”

The metal’s relative lack of appreciation becomes even more interesting when one considers that this relationship only broke down twice in the last decade: The first instance happened during the Great Recession, when central banks sold off their gold reserves to meet liquidity requirements. The second was in 2013, when the Federal Reserve announced it was winding down its massive QE program that involved asset purchases.