Home » Blog » Gold is Immune to the Coronavirus, Says Goldman

Gold is Immune to the Coronavirus, Says Goldman 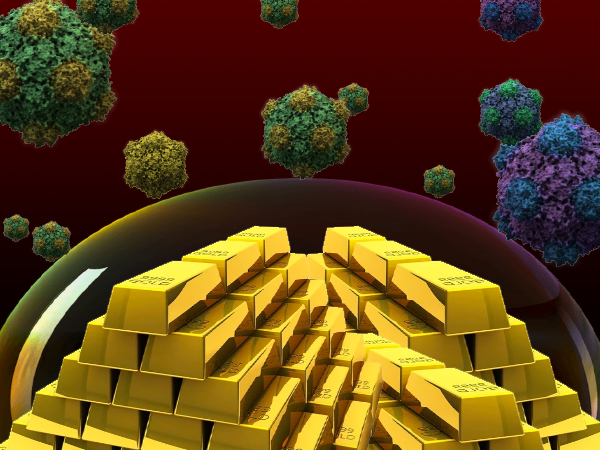 This week, Your News to Know rounds up the latest top stories involving gold and the overall economy. Stories include: Gold is immune to the effects of the coronavirus, the Fed is once again driving a flurry of gains in the gold market, and the Royal Mint of Britain issues various unique gold coins and bars ahead of new James Bond movie premiere.

Goldman: Gold is one asset that won’t suffer the ill effects of the coronavirus

After two successive upgrades to their gold price forecast, Goldman Sachs has released yet another note that is highly supportive of the metal moving forward. In the note, Goldman’s head of global commodities research, Jeff Currie, said that gold is immune to the coronavirus in both figurative and literal senses.

Currie has little doubt that the astounding amount of uncertainty that’s currently gripping the markets is bound to continue as the coronavirus spreads and begins to take its toll on the global economy. In this environment, gold may be one of, if not the only asset that investors can truly rely on regardless of how the crisis progresses.

In the note, Currie highlighted the fact that gold was up roughly 5% since the start of the year at the time of publication, a stark contrast to the S&P 500’s decline of more than 8%.

Along with acknowledging that gold is the safest bet investors can make in this ever-changing climate, Currie also shared a peculiar, yet important take regarding the metal’s physical properties. Should concerns over the coronavirus escalate to a point where paper currencies are seen as transmitters of the disease, Currie noted that gold stands to benefit even more by providing a safe medium of transfer.

The Fed’s emergency rate cut has placed gold back on track towards $1,700

Although gold’s outperformance over the past nine months can be attributed to numerous factors, the dovish turn by central banks around the world in the second half of 2019 could be singled out as the most potent driver. The Federal Reserve’s three rate cuts, along with much of the same from other central banks, helped push gold to levels last seen in 2013.

Now, as the coronavirus crisis unfolds further, central banks seem to have once again positioned themselves to be the primary drivers of gold prices. Despite a rising interest in havens, gold recently came under a sharp selloff as coronavirus-related panic gripped the markets.

The metal’s losses were all but erased last Tuesday, when the Federal Reserve announced that it will perform a non-scheduled benchmark rate cut for the first time since 2008. Furthermore, the central bank sliced its interest rate by 50 points, as opposed to the standard 25-basis-point cut.

It didn’t take long for investors to take notice and begin pouring into the gold market once again, as the metal rose by 3.2% on the same day. The latest rate cut has also harmed the already-concerning 10-year Treasury and further eroded haven prospects for investors.

With the Bank of England and the Bank of Canada both being rumored to follow up with rate cuts of their own, gold prices look ready to meet numerous forecasts by passing $1,700 in the near future. The metal has continued to climb in the wake of the emergency cut, currently sitting around $1,660 which marks its highest levels of the year.

As London prepares for the first screening of the newest Bond movie later this month, Britain’s Royal Mint decided to commemorate the event in a unique fashion. Last Monday, the mint unveiled numerous Bond-related precious metals memorabilia, helmed by the largest and most valuable coin issued in the mint’s 1,100 years of operation.

The coin in question stands out due to its sheer size and unique design, sporting a diameter of 185 millimeters and weighing in at an astounding seven kilograms. Christian Davies and Matt Dent shared their road to achieving the best possible design given the coin’s dimensions and content, ultimately settling for an unmistakable obverse that features the Aston Martin DB5, Bond’s vehicle of choice, accompanied by the iconic BMT 216A license plates.

The mint unveiled several other unique “No Time To Die” coins and bars, including gold coins weighing between five ounces to 2 kilograms. The mint will also issue gold and silver bars engraved with the titles of all of the 25 James Bond movies, with No Time To Die being the latest on the list.

While the mint didn’t provide a price tag for the seven-kilo coin, it placed the recommended retail value for the 2-kilo piece at £129,990 ($170,000). Due to the seven-kilo coin’s uniqueness and near-quadruple weight, one can safely surmise that it stands out as one of the most valuable pieces issued by any sovereign mint going back decades.