Home » Blog » Safe-Haven Gold Soars, but Not as High as This

Safe-Haven Gold Soars, but Not as High as This 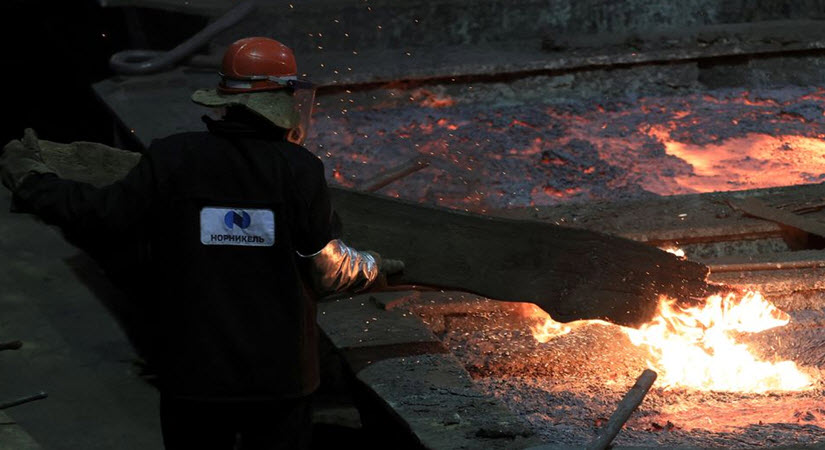 An employee works at Nadezhda Metallurgical Plant of Nornickel company, the world's leading nickel and palladium producer, in the Arctic city of Norilsk, Russia. Image via REUTERS/Tatyana Makeyeva

This week, Your News to Know rounds up the latest top stories involving gold and the overall economy. Stories include: Precious metals break out over Russia-Ukraine conflict, the three investments Mark Mobius likes in these times, and the shrinking of the safe-haven asset class.

After a steady week of gains, gold has had a volatile Friday, of the kind that is very much to the gold bug’s liking. Bullish forecasts for $2,000 gold this year were expedited with force by the Russia-Ukraine conflict. We’re now thinking $2,000 will be the price that could define the long-term trajectory of gold’s price.

While gold sprung up mostly on safe-haven demand, palladium’s price surge has been a tale of scarcity. With 40% of the world’s palladium produced in Russia, it has always had a troublesome supply picture. Today we have the top palladium producer launching the largest military conflict in recent times amidst rising demand, well, the picture paints itself.

Last week, palladium flew past $3,000/oz – a price we last saw two years ago. It’s now one of the top performers of all commodities. And that’s saying something, considering the S&P commodity index is up 41.33% so far this year. (Note that palladium is one of the four metals legally allowed in a precious metals IRA.)

Both the U.S. dollar’s gains and rate hike expectations seem to be secondary factors in the eyes of traders and investors. Analysts agree that the outlook for gold is decidedly bullish, in no small part because both Russia and Ukraine seem determined to fight on. Saxo Bank analyst Ole Hansen said that there is more than a safe-haven aspect to gold demand, as tensions threaten to impact the broader market and the global economy.

Silver rose to $25.67 on Friday, its fifth consecutive weekly gain, while platinum likewise saw positive action with a 3.4% gain.

The U.S. stock market, which has been plummeting over the conflict, is another point of interest. Besides this, OANDA’s senior market analyst Edward Moya underscored the supply disruptions regarding palladium, which are likely to make room for considerable upside.

Mark Mobius: Gold is one of the few assets to be bullish on

Renowned investor and money manager Mark Mobius recently spoke to Bloomberg about where he feels capital should go in view of the ongoing conflict. The longest bull market in history, a lack of real economic backing and overvaluations are issues that were already plaguing the U.S. stock market. Russia’s actions have greatly intensified concerns over what seems to be a unanimous bubble.

Mobius agrees, as the assets he is bullish on seem few and far between. Of the three assets named, the first two are Chinese and emerging-market stocks. Mobius expects China to remain neutral in the conflict while focusing on strengthening its economy, a theme that looks prominent across the Asian markets.

Mobius’ third asset is one he has long been a proponent of, and perhaps one he has the highest hopes for. While acknowledging the impact of Russia’s invasion on the markets, Mobius advised investors not to lose track of the broader picture which is just as supportive of gold.

Specifically, he took note of the currency devaluation and soaring inflation that have become a theme in seemingly every sovereign nation.

Despite his exposure to a plethora of assets, Mobius favors diversifying savings with a 10% gold allocation as a shield against any number of calamities.

Gold used to be the best safe haven, and now it looks like the only real one

As seen on Kitco, the second week of the Russia-Ukraine conflict looks as bad as expected. Some one million Ukrainians have already fled to Europe, threatening to destabilize the region. In Russia, the economy has taken an unprecedented blow as the rest of the world cuts the aggressor nation off. The surge in oil prices to the highest levels since 2008 has contributed to the volatility in equities, which are nearing correction territory.

In an environment like this, the scramble for safe havens is easily felt, as exemplified by gold’s jump to $2,000. But which safe havens?

The only ones that seem to offer any kind of safety are the U.S. dollar and gold. And while the former has gained in response, we can’t help but feel that the greenback shouldn’t be treated as a long-term safe haven when U.S. inflation is passing 30-year highs.

James Luke, fund manager at Schroders, said that investors are recognizing the prevalent economic weakness despite reassurances and are viewing rate hikes as risky during what he refers to as an abnormal macroeconomic backdrop:

Apart from being highly indebted, developed economies have become reliant on massive monetary and fiscal stimulus. The potential for negative feedback loops (a reaction that causes a decrease in function in response to a stimulus) into the real economy and financial markets as stimulus is removed and interest rates rise, is elevated.

Sprott CEO Peter Grosskopf expanded on how the lack of appeal for bonds is translating into overwhelming gold demand. Virtually every asset, including supposed safe-havens in the form of bonds, is now introducing risk and threatening a person’s wealth. This is why gold is becoming ubiquitous.

We’re on the front lines of gold business, and what we are seeing is more investors moving into gold and adding it to their portfolios at higher percentages. That’s the underlying bid for gold. Almost every big state pension fund in the U.S. is looking at gold. Only a few years ago, it was maybe two out of 50 funds that were interested in gold.

And, we know from past experience, if interest and demand remain at these levels, we could easily see another surge of sell-outs and soaring premiums across the physical precious metals space. That’s when the prudent investors, who made their moves into precious metals early rather than late, can enjoy the bounty of their foresight.