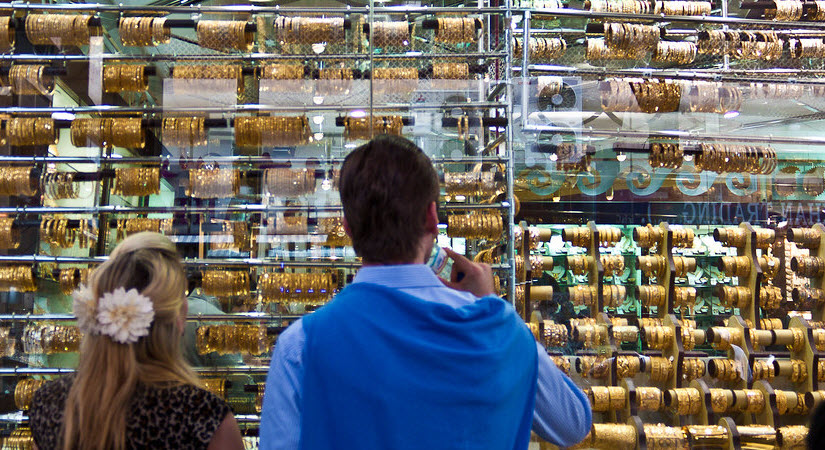 This week, Your News to Know rounds up the latest top stories involving gold and the overall economy. Stories include: Goldman Sachs raises year-end gold forecast to $2,500; why gold shines bright even after a losing Q2; and Zimbabwe rediscovers gold as a cornerstone of economic stability.

Goldman Sachs reiterated their bullish stance on gold by most recently raising their year-end target for gold to $2,500. As the bank noted, gold has actually been in a downturn throughout last year due to stimulus-driven economic growth. Though prices have remained high, it closed last year with a 4% loss in what now seems like the biggest bout of an economic boom we’ll see in a while.

Interestingly enough, Goldman’s lofty forecast for gold excludes the possibility of hyperinflation and seems more in line with inflation “under control,” as the Federal Reserve intends. What’s most interesting is that this $2,500 price rise will most likely be caused by other factors. Inflation expectations are crucial. Goldman says inflation expectations (among everyday Americans as well as Fortune 500 CEOs and CFOIs) are likely to stay elevated or even soar right off the charts – regardless of how official inflation rate reports fluctuate from month to month.

In other words, Goldman’s analysts think high inflation expectations have become “anchored,” and that’s important. As the Brookings Institution explains:

High inflation expectations can all too easily become a self-fulfilling prophecy. One example of this destructive feedback loop is called a wage-price spiral.

As you can see, once this cycle starts it’s truly difficult for the Fed to bring down inflation even if unemployment is high. That’s one major reason the Fed is likely to stick to its interest rate hiking schedule and quantitative tightening despite the risk of economic recession.

So what does this mean for gold price? Back in 2011, Federal Reserve Chairman Ben Bernanke explained:

Well, I pay attention to the price of gold, but I think it reflects a lot of things. It reflects global uncertainties. The reason people hold gold is as a protection against what we call tail risk, really, really bad outcomes. And to the extent that the last few years have made people more worried about the potential of a major crisis, then they have gold as a protection.

Considering how quickly the financial markets and the broader economy have been sinking, gold should have plenty of room to reach Goldman’s price target before the end of this year.

On the other hand, if we haven’t seen “peak inflation” and prices continue rising month over month, gold could easily soar past $2,500. Like Bernanke said, the more people worry about a major crisis, the more likely they are to buy gold.

What are people supposed to do with their money?

The answer to this question depends on who you ask.

Analysts have praised gold’s performance despite its recent drop below $1,800. At first glance, that might not make sense – why get excited over a price decline? In fact, gold has done exactly what it’s supposed to by storing value.

Consider: the S&P 500 Index had its worst half of the year since 1970, down 21.5% year-to-date at the moment. The broad bond market is officially in correction territory, down over 10% in 2022. Crypto had the biggest quarterly drop in more than a decade. The decline so far this year has been pretty much universal –take a look at this summary from Alhambra Investments: 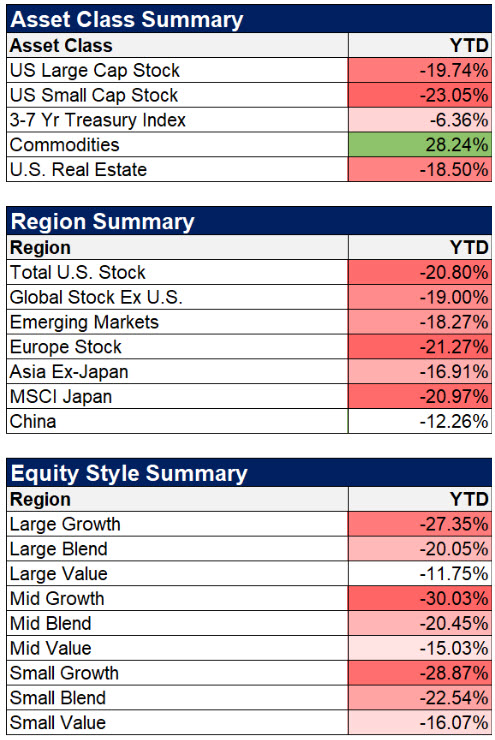 If you’re one of the people annoyed with gold for dropping some 2% since January 1, well, take a look at that chart and count your blessings. It could’ve been much worse.

Edward Moya, a senior market analyst at OANDA, said that a trading range with $1,785 as hard support could persist for several weeks. (Let’s hope we get a few more weeks of low prices before the Goldman-predicted spike to $2,500!) Walsh Trading co-director Sean Lusk attributes this to gold, like any other market that performed well, coming under a selloff. Though obviously, a negligible one in comparison.

Moya noted that there are already signals that the economy is slowing faster than expected. Besides that, both analysts agree that the markets are stuck in waiting mode to see just how bad things are, and if there indeed are any improvements. “We really need to see data showing that inflation peak is in place. We are in a choppy period because that question won’t be answered by one data point. We need to see a few reports. And you need to hear from corporate America, and right now, that is not the case,” said Moya.

So, no matter how annoyed you might be with gold’s price right now, remember: now (not later) is a good time to buy gold, before everyone else wants to. Also remember, the first half of the year was much, much worse for virtually every other asset class.

We all know the story of the gold standard. We’ve all heard the calls for a return to sound money, backed by its own intrinsic value rather than the vague promises of politicians.

Since the end of the gold standard in the U.S. back in 1971, which pretty much spelled the end of sound money worldwide, what we haven’t seen is an attempt to use gold as money.

Zimbabwe, a nation seemingly cursed with an appalling track record of monetary mismanagement, reported 191% year-over-year inflation and, a couple of days later, an official series of gold coins that would be sold at banks and available to everyone.

The Reserve Bank of Zimbabwe’s Monetary Policy Committee (MPC) resolved to introduce gold coins into the market as an instrument that will enable investors to store value. The gold coins will be minted by Fidelity Gold Refineries (Private) Limited and will be sold to the public through normal banking channels.

The mint in question is Zimbabwe’s state-run gold refiner, which is the sole provider of most gold-related transactions in the nation.

The most interesting part of this announcement is the reason stated for gold coins – they’re intended to “enable investors to store value.” In other words, relying on gold’s safe haven reputation to keep investments in Zimbabwe, sheltered from the ruinous inflation caused by printing paper money. No doubt those investors who wanted gold already had options for purchasing it. Making an official series of gold coins widely available, though, does two very smart things:

In addition, Mangudya also promised that the central bank wouldn’t print more currency to finance the government’s deficit spending. (They tried that in 2020 – and inflation soared well beyond 800% that year.)

All things considered, this is an almost shockingly sensible policy. By offering official gold coins for sale and giving up on printing new money, the central bank is effectively admitting they messed up. (Have you ever heard a central banker explicitly acknowledge a mistake?) It’s as though Mangudya is saying, “We tried money-printing and it failed, so we’re going to try something else – here’s the plan…” And it’s a good plan!

Let’s hope this new era of widely-available sound money helps get Zimbabwe past their truly wretched economic history. Who can forget Robert Mugabe’s hyperinflationary spiral in the mid-2000s? (I still have a Zimbabwe 100 trillion-dollar note I bought on eBay – I use it as a bookmark.)

Today, in addition to nearly 200% annual inflation, Zimbabwe has a 90% unemployment rate and their new currency, the Real Time Gross Settlement Dollar, has lost 99.7% of its purchasing power since its inception in 2019.

Let’s hope Zimbabwe’s central bank has given up on Modern Monetary Theory (MMT) in favor of building economic confidence with sound money, the historical cornerstone of economic prosperity.