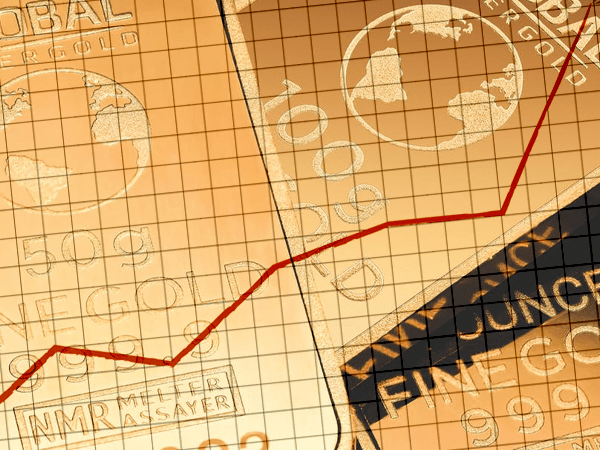 This week, Your News to Know rounds up the latest news involving gold and the overall economy. Stories include: Main St. bullish on gold for 2019, market turmoil shows why you should own gold, and gold to remain an attractive diversifier in 2019.

A recent poll by Kitco News had nearly 5,000 retail investors share their forecast for gold’s price in 2019. The largest group of respondents, numbering 1,640 participants or 34% of the overall pool, predicted that gold would push above $1,500 an ounce by the end of next year.

Of the remaining 66%, the overwhelming majority of participants called for gold to hold above $1,300 by the end of 2019, with most expecting prices to push closer to $1,400. This year’s forecasts are a slight upgrade from the previous, where over 40% of respondents predicted that gold would surpass $1,400 an ounce in 2018. The yellow metal would ultimately stop just short of that, reaching $1,364 in January.

After a rough quarter for the equity market, gold finds itself with plenty of momentum heading into 2019. The metal gained 4.5% in December of 2018, the largest monthly percentage gain since January 2017, as investors look for safety in an increasingly uncertain environment.

Retail investors aren’t the only ones who are bullish on gold. Bank of America Merrill Lynch and Dutch bank ABN AMRO both see gold reaching $1,400 next year. In an earlier interview, IHS Markets’ precious metals analyst KC Chang told Kitco that a pick-up in inflation would be enough to settle gold prices above $1,300 next year.

Market turmoil shows why you should own gold

In a comparatively quick downturn, the stock market went from unprecedented prosperity to raising concerns about another financial crisis. As a result, Forbes’ Simon Constable sees no better validation for owning gold.

While these are times where riskier assets may seem irresistible, those times may be passing, as traders are beginning to show an increased interest in commodities amid rising red flags in the equity market. Yet, as Constable points out, no commodity can offer the kind of long-term guarantees, coupled with impressive short-term returns, that gold does.

In 2017, gold posted a return of over 7% in what many felt was one of the strongest years ever for the stock market. With the high likelihood that stocks will continue correcting in 2019, the short-term prospects for a primarily long-run investment become all the more exciting.

Stocks aren’t the only source of market worries, as a number of other flare-ups had investors reaching for the panic button in 2018. Most of these concerns, such as the costly trade war between the U.S. and China, look to spill over heavily into 2019.

Past that, publisher and CEO Frank Holmes thinks a change in Fed policy could be a major source of gold’s gains in the near future. Officials have hinted at wrapping up their tightening schedule starting next year, which would weaken the dollar and open up a new window of opportunity for the yellow metal.

Holmes has consistently recommended a 10% portfolio allocation to gold, although Constable notes that investors may choose to go much higher. With so many tailwinds working in its favor, those with a heavier gold weighting could soon be reminded that the metal offers far more than portfolio insurance.

WGC: Gold to remain an attractive diversifier for investors and central banks in 2019

According to John Reade, chief market strategist at the World Gold Council, investors should prepare for a year with much harsher market conditions than 2018. In a recent interview with Kitco, Reade said that the era of easy money in the U.S. stock market could be replaced by a lengthy bearish stretch that many traders are unprepared for.

Furthermore, the safe haven that the U.S. dollar provided through most of 2018 will likely dissipate as the Fed shifts course for the first time since 2015. With other reserve currencies plagued by their own issues, Reade expects gold to emerge as the only true haven option for 2019. In his outlook for the new year, the strategist said that upcoming economic difficulties will play directly into the metal’s hand.

“As a high quality, liquid asset, with the potential to deliver strong returns, and as an effective diversifier that works particularly well when other assets fall sharply, gold has historically proven to enhance the long-term performance of investment portfolios,” said Reade in the report.

But it won’t be just individual investors and portfolio managers rushing to increase their exposure to gold. As noted in earlier reports, central banks have steadily increased their monthly gold acquisitions this year, further cementing their status as the biggest buyers of bullion.

In 2017, central banks purchased a total of 341.3 tons of gold, while this past year’s forecast places the number closer to 450. Besides standard gold buyers in countries like Russia, Turkey and Kazakhstan, 2018 saw several European nations and emerging economies make multi-ton acquisitions after years of absence. Hungary’s 10-fold increase in reserves might be the most striking, as the European Union member state bumped its stockpile from 3.1 tons to 31.5 tons within the span of one month.

Based on various conversations between WGC members and central bank representatives, Reade said he expects this trend to continue into 2019.